The Hyundai Accent (Korean: 현대 엑센트), or Hyundai Verna (현대 베르나) is a subcompact car produced by Hyundai. In Australia, the first generation models carried over the Hyundai Excel name used by the Accent's predecessor. The Accent was replaced in 2000 by the Hyundai Verna in South Korea, although most international markets, including the US, retained the "Accent" name. The "Accent" name is an abbreviation of Advanced Compact Car of Epoch-making New Technology.

The 2007 Accent comes in three trims: the GS, GLS, and SE. While the GLS is a 4-door sedan, the GS and SE are 3-door hatchbacks. All three share the same 1.6L 110hp I-4 engine, 5-speed manual transmission w/OD, and front wheel drive. See the Safety section below for a list of standard safety features. Other standout features on the Accent include:

Today's actual prices for the Hyundai Accent can be found at CarsDirect.

The Accent comes equipped with an 11.9 gallon fuel tank.

The latest generation of the Accent was only introduced for the 2006 model year, so long-term reliability information is not yet available for it. However, for the 2004 model, Automotive Information Systems awarded the Accent an overall Green rating, indicating minimal problems in all categories.

The 2007 Accent 4-door was tested by the NHTSA. See safercar.gov for full test details.

In 2007, the current generation Accent scored only 3 stars when tested by ANCAP.

A 2000 Accent managed to score 3 stars in ANCAP out of 5. Although it isn't the safest car, it is fairly safe compared to other small cars tested.

In 1998, the Hyundai Accent scored 2 stars out of 5. The passenger compartment was critically deformed. There was a moderate risk of serious chest and right leg injury for the driver and a further risk of serious injury to the driver's left leg and feet. In the side impact test, there's a high risk of life-threatening chest injuries for the driver.

Available colors will vary by trim, and a full list is viewable at CarsDirect.com. Some of the possible combinations include:

According to Soultek.com the debut date for the Hybrid version of the Accent has been delayed considerably:

"Originally, the Accent hybrid was set to launch in late 2006; however, due to currency issues, Hyundai has pushed back the development of their hybrid cars until 2009 - at the earliest.Not much has been released about Hyundai's hybrid technology. Hyundai hybrids will be built on proprietary hybrid technology, unlike the Ford Escape or Nissan Altima hybrids, which are built with licensed Toyota hybrid technology."

According to Kelley Blue Book, "the 2006 GLS sedan, first of the third-generation Accents to be introduced, has a five-year projected residual value of just 25 percent, while the 2007 GS and SE three-door hatchbacks are projected at 29 and 30 percent, respectively. By contrast, the Honda Fit should hold 43 to 44 percent of its new-car value after five years, and the Toyota Yaris 40 to 41 percent, depending on the model. However, we believe Accent residuals will improve over time as Hyundai's image and quality reputations continue to climb."

The second generation Hyundai Accent was named the Worst Car of the Year by Top Gear.

The fifth-generation Accent has been introduced in China as Verna in late 2016. Production began in the same year with sales started around February 2017. In Russia, where it is known as Solaris as well as in some other CIS markets, the car has been available since March 2017. In India, the car was launched in August 2017 as Verna. It went on sale in the United States in December 2017.

Unlike the previous generations, the fifth-generation Accent is not sold in South Korea due to falling demand; instead the Venue crossover takes its place in 2019. Without supply from South Korea, the Accent was also phased out in Australia, leaving the entry model role to the Venue.

The Accent was discontinued in Canada in the end of 2020 and was indirectly replaced by the Kona and Venue crossovers, after axing only the sedan model in 2019. The Accent sedan remains available in the United States, while both the sedan and hatchback remain available in Mexico.

The Verna was revealed as a concept version at the 2016 Chengdu Auto Show. It was sold from October 2016, with two body styles available which are 4-door sedan and 5-door hatchback, marketed as the Verna RV. The Chinese-market Verna was given a facelift in 2020.

Hyundai staged the world-premiere of the fourth generation Accent as the Verna at the 2010 Beijing Auto Show.

Hyundai released the Korean version of the Accent (RB series) in November 2010. The new model is offered with the same 1.6-liter engine and 6-speed automatic or 6-speed manual as the fifth-generation (MD) Elantra. The car reverted to the "Accent" name as used in the X3 series. The hatchback version, called Accent WIT, replaces the Getz/Click in South Korea. Sedan model was discontinued since in late 2018; the hatchback model was in August 2018. It was sold until Hyundai Venue launched in July 2019.

In Beijing, China, Hyundai released the China-exclusive version of this model under the "Verna" name on 23 August 2010 under the model code RC.

In January 2011, the sedan had its North American debut and the hatchback had its world debut at the Montreal Auto Show.

Hyundai introduced a new-generation Accent (MC) at the 2005 New York International Auto Show. A new exterior, larger interior, and CVVT engine are the notable features. A hybrid version is expected in 2006 as a 2007 model.

A single trim level, GLS, is available in the United States. This sedan includes 6 airbags, air conditioning, power steering with tilt, four-wheel disc antilock brakes with electronic brake-force distribution, and a 6-speaker CD stereo. Pricing starts at US$12,995, nearly $2,000 more expensive than a base 2005 model. A premium sport package, priced at $1,500, includes air conditioning, 15in. alloy wheels, power windows and heated mirrors, and remote power door locks. An automatic transmission retails for $850, bringing the price of a loaded Accent to $15,345. A three-door hatchback version will arrive by spring 2006 as a 2007 model.

Hyundai's Accent rally car competed in the World Rally Championships in the late 90s. The car was eventually retired from service with no major victories, but it was reasonably competitive at times and showed some promise.

The redesigned 1999 Accent (LC) sported a more angular body and increased dimensions. It received a minor facelift in 2003, and was given the model code LC2. When the Accent sedan underwent a 2006 redesign, the hatchback continued on sale during 2006 only in Canada, since the hatchback skipped the 2006 model year for the United States. But for Korea, it was the first model with the new nameplate: Verna.

The Accent got revised 1.3 and 1.5-litre engines, featuring various improvements to lower noise, vibration, and harshness. A 1.6-litre DOHC 16-valve replaced the 1.5-litre from 2001, with the 1.5 continuing to be available in some markets. This Accent was also the first to get a diesel version, with a 1.5-litre three-cylinder direct injection turbodiesel, which was badged CRDi.

Trim levels were GSi, CDX and MVi: this was standard on most export versions, although some European markets had their own designations with names like Dynamic=Version etc. Some markets used LS and GLS.

The Hyundai Accent (X3) was introduced as a replacement for the Excel in 1994 for the 1995 model year. It continued to be called Dodge Brisa in Venezuela or Hyundai Excel in some markets, such as the Netherlands, Belgium, Indonesia and Australia. In France, it was called the Hyundai Pony, in Indonesia, the pre-facelift model was called as Bimantara Cakra and in China, it was called the Kia Qianlima.

The Accent is produced for the Chinese market by the Dongfeng Yueda Kia Automobile Company, a joint venture with a Hyundai subsidiary, Kia. In Mexico, the Accent is marketed by DaimlerChrysler as the Dodge Attitude, previously Verna by Dodge. In Venezuela, DaimlerChrysler markets the Brisa de Dodge, which is based on an older Accent model. The Brisa is assembled by Mitsubishi Motors at its plant in Barcelona, Venezuela. In Puerto Rico its was renamed to a Hyundai Brio.

In the Indian auto market, Hyundai has launched both models Hyundai Accent and Hyundai Verna. Hyundai Accent is an entry level sedan model while Hyundai Verna is a mid-size sedan model from Hyundai's product portfolio in Indian market. Hyundai India has recently launched the new version of Hyundai Verna named as Hyundai Verna Transform which is available with both petrol and diesel engine options and it is also available with automatic transmission. The Hyundai Verna is much popular mid-sized sedan model in Indian market due to its sporty and stylish look, power, comfort and its competitive pricing. It offers well balanced exteriors with the world class interiors that facilitating comfort with style. Hyundai Verna Transform is presently available with five variants, out of which its two variants are powered by the petrol engine and two variants are equipped with the diesel engine while the fifth one variant is equipped with diesel engine with automatic transmission option. All of these variants are packed with impressive and advanced features which are also main highlights of the car. 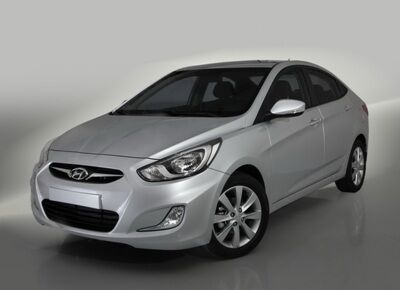 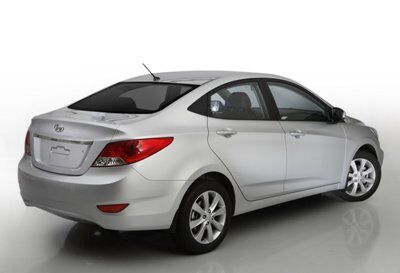 The Russians get their own version of the Accent/Verna called the Solaris. Based heavily on the Hyundai RB Concept seen at the 2010 Moscow International Motor Show, the Solaris departs heavily from the Accent/Verna with a nose similar in language to the second-gen Hyundai Tucson and more in keeping with Hyundai's new corporate language. Production is set to begin in January 2011 and will get Russia-only standard goodies such as rear heating duct, 4.0-liter washer fluid reservoir (with low level sensor), a 60Ah (ampere-hour) battery "for higher cold start performance", front and rear mudguards, and a set of enduro (1,500 hour) headlamps to allow it to cope with the harsh Russian weather. Options include wiper de-icer, heated driver/front passenger seats, heated mirrors, and an automatic "Emergency Stop Signal" that turns on should an accident occur

Jeremy Clarkson bought a green Accent hatchback and took it to a demolition derby with Fifth Gear presenter Tiff Needel who wanted to take on Jeremy. The car suffered front damaged by a crash with Tiff but the car was the only one working when the round was finished. Jeremy already attempted to puncture a tyre but he ended up with a punctured thumb. He then took it to a scrapyard and was crushed.

In the What Women Want survey cunducted by the RACV in 2003, the Accent is the most popular choice among women buying a Hyundai.

This page uses content from Wikipedia; see Hyundai Accent, which includes these contributors.