The Hummer H2 is the second vehicle sold under the Hummer marque of General Motors. It is a large SUV (though smaller than the Hummer H1) with room for five passengers and substantial off-road ability. The rearmost part of the H2 SUV was modified to a pickup truck bed for the 2004 H2 SUT ("Sport Utility Truck").

The H2 is the second heaviest SUV in the world, the heaviest being the Ford Excursion.

The H2 is built under contract by AM General at a specially constructed plant in Mishawaka, Indiana, USA. Although it shares GM's GMT820 truck platform with the Chevrolet Tahoe and GMC Yukon, those vehicles differ in many ways and are constructed in three other GM plants. The H2's final frame assembly is made up of 3 sections: The front uses a modified GM 2500-Series utility frame, the mid-section is all new and is completely boxed, and the rear section uses a modifed GM 1500-Series frame which is upgraded for the 8000 pound gross vehicle weight.

For typical travel on improved roads, users report fuel economy of between 10 and 14 miles per gallon, which converts to between 14 and 17 L/100 km. Worst case urban driving is said to be in the range of 8 to 11 U.S. mpg (21 to 25 L/100 km). Although General Motors does not provide official H2 fuel economy ratings, most reviews have observed high single to low double-digit mileage, similar to the numbers above.

With its high ground clearance, large tires, protective underbody plates, and low gearing, the H2 is capable of climbing over a 20-inch-high (0.4 m) step-up wall (without the sill steps shown in the pictured example). A massive truck frame and wide track offer stability against overturning compared to some of the more common light truck SUVs, although objective tests have not been performed by the government or other outside parties due to its specialized vehicle class.

The Hummer H2 has numerous features that help you before, during and after impact.

This system constantly monitors pressure in all 4 tires and if one or more falls below the optimum level, an indicator light on the instrument panel illuminates.Individual tire pressures are displayed in the driver information center.

This is a system for anchoring child seats in the rear.

When activated, these locks help prevent young children from opening the rear doors from inside the vehicle.

This feature helps increase the visibility of the vehicle to other drivers during daylight hours.

In the event of a moderate to severe si 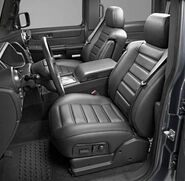 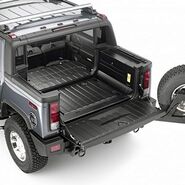 The colors that the Hummer H2 comes in is:

The H2 was never sold with a hybrid variant.

Under the United States income tax code, the cost of vehicles over 6,000 pounds (2722 kg) can be deducted from income. This deduction was enacted decades ago to assist self-employed people in purchasing a vehicle for business use. The weight minimum was intended to limit the deduction to commercial-type trucks. For many years, the deduction remained below the average cost of a new vehicle, since large trucks were relatively inexpensive. Since it is a reduction in taxable income, the actual value of this deduction averages 30% of the price of the vehicle in question.

The increasing popularity of these vehicles in the last decade, however, pushed their average price to nearly double the average passenger car cost. In response, the 2002 Tax Act increased this "Section 179 depreciation deduction" to $75,000, and it rose again to $102,000 for the 2004 tax year. This is more than three times the current average cost of a passenger car in the United States and covers a large number of luxury models, including the Hummer H2. In late 2004, the deduction was again reduced to $25,000.

The Hummer H2 is one of the most severely criticized civilian vehicles on the market today. Many critics have expressed concern at the fuel economy which they cite as being among the most inefficient vehicles. Many see the Hummer H2 as the "poster child" of America's gluttonous gas-guzzling car culture. The Environmental Protection Agency does not test them for fuel economy and because of their weight, they are categorized as light trucks and thus are not bound to fuel economy standards.

The Hummer H2 is singled out the as being the 'worst offender' in what they consider to be an automobile arms race amongst drivers on the road being lured into thinking that they are safer than smaller vehicles but instead contribute towards the excessive petroleum comsumption and air pollution in the United States, contributes greatly to global warming, as well their large size obstructs the views of drivers behind them. Criticism is also leveled at the H2 by safety advocates who have expressed concern that their size and height make them far deadlier to smaller vehicles as well as bicyclists, and pedestrians since the front of the Hummer H2 will likely strike the head and/or chest where injuries are far more life-threatening instead of the knees where regular cars are most likely to impact a pedestrian. The high center of gravity in these vehicles also makes them much more vulnerable to rolling over in an accident, even though claims are made they have a wide wheelbase to compensate for that.

Because the Hummer H2 is viewed as being a symbol of many social problems, enormous resentment is held towards the vehicle. Some extreme critics have even resorted into violence including an incident in August of 2003 when arsonists destroyed a car dealership along with the 22 Hummers it had in it. Some hostility is also directed towards their owners as well, viewing them as being selfish, arrogant showoffs who buy them just so to compensate for some personal deficiency. The website fuh2.com [6] for example features thousands of photos of people worldwide flipping off Hummers.

The H2 was sold in a single generation

Hummer H2's made many appearances in rap music videos, gangsta films, and a lot of other show where you need to describe a person as cool and tough.

The H2 was nominated for the North American Truck of the Year award for 2003.


Retrieved from "https://automobile.fandom.com/wiki/Hummer_H2?oldid=109917"
Community content is available under CC-BY-SA unless otherwise noted.