The Honda Odyssey is a popular mainstream minivan in the U.S. market. It has achieved significant success since its introduction in 1995, not only creating high consumer demand, but also winning award after award from critics. It has achieved a 5 Star safety rating based on tests by the NHTSA, and its Variable Cylinder Management system has helped it to achieve high fuel efficiency. A roomy and practical family-oriented vehicle, the Odyssey looks to set the standard for minivans and crossovers across the spectrum.

The Odyssey comes available in four trims: the LX, EX, EX-L, and Touring. All versions come equipped with the same engine, a 3.5L 244hp V6(Same engine that powers the Honda Pilot), and all operate on a 5-speed automatic transmission with overdrive.

The LX and EX models both have an EPA estimate of 19 in the city and 25 on the highway. Thanks to the “Variable Cylinder Management” technology on the EX-L and Touring models, the EPA estimnate is improved to 20 in the city and 28 on the highway. This revolutionary feature allows the rear bank of three cylinders on the V-6 engine to be activated or deactivated, depending upon driving demands, which as a result, saves fuel while also decreasing emissions. The Odyssey was ranked the most “Fuel-Efficient Mini-Van” by the EPA and by Kiplinger magazine.

As with all Honda’s the Odyssey comes standard with a 3 year or 36,000 mile comprehensive warranty. The Odyssey has had a great track record of performing well and is considered to be very reliable amongst its minivan peers. The Odyssey was awarded the IntelliChoice “Best Overall Value of the Year” award for 2006.

The Honda Odyssey is loaded with many standard safety features on all trims, like anti-lock brakes and vehicle stability assist. Also standard are front airbags, front side airbags and 3-row side curtain airbag with rollover sensor. The van is equipped with sensors which prevent the deployment of the passenger's side airbag if a child or small adult is in the deployment path. The body incorporates a front-end frame structure that absorbs and disperses crash energy over a larger area.

The NHTSA has awarded the Odyssey Five Stars for all front- and side-impact crash tests, and the Odyssey received Four Stars for its rollover test. Its record has been impressive for several years in a row. 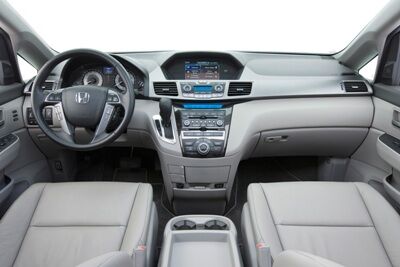 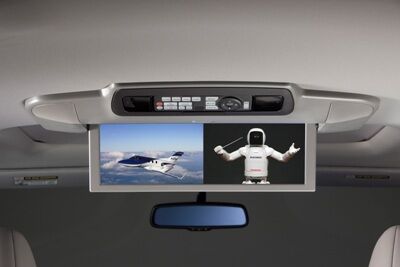 A full list of colors can be found at CarsDirect.com. Combinations will vary, depending on the trim selected. Some of the available ones are:

There are currently no hybrid models of the Odyssey.

The Odyssey's resale value is considerably high, which makes sense when one considers that the Odyssey has been in such high demand that paying quite a bit over MSRP is typical. Kelley Blue Book reports that "the Odyssey's pricing may seem high, but over a five-year period it holds its value better than the Chrysler Town & Country, Dodge Grand Caravan, Kia Sedona, Pontiac Montana, Buick Terraza, Nissan Quest, Ford Freestar and even the Toyota Sienna." The 2006 Odyssey was considered to have the "Best Resale Value" in the Minivan category by Kelley Blue Book.

The fifth generation Odyssey was unveiled at the 2017 North American International Auto Show in January. Sales began on May 25, 2017 as a 2018 model. A 10-speed automatic (optional within Touring and Elite trim levels) produced at Honda Precision Parts Georgia (HPPG) is Honda's first use of a 10-speed transmission in a production automobile.

The 2018 Honda Odyssey rides on an all-new chassis that is 40% stiffer and 34-kilos lighter than the old. It is remarkably quiet, with very little wind or road noise finding its way into the cabin. New steering and suspension systems have resulted in increased alacrity and less lean. The 2018 Odyssey is powered by a 3.5-litre V-6 engine putting out a hefty 280 horsepower, up 30 from the outgoing model.

The fourth generation Odyssey is one of the most luxurious minivans ever. It includes DVD entertainment system and a cool-box/mini-refrigerator similar to the ice makers used in the earlier Toyota Van, Nissan Van, Mitsubishi Van.

The American Odyssey was redesigned for the second time and released in September 2006 as a 2007 model. The American Odyssey also had four trim lines. Production moved from Alliston, Ontario, Canada, to Lincoln, Alabama and the Alliston line was retooled to build the Ridgeline. It continued on the global light truck platform remaining different from the Japanese domestic market Odyssey. It retained from the previous model the basic chassis with front strut suspension and multi-link rear suspension and was only marginally larger and heavier. It continued with a 3.5 L V6 engine. EX-L and Touring models have i-VTEC with Variable Cylinder Management. The Odyssey added "PAX" run flat tires only in the new Touring model, a lazy susan storage bin in the floor where the spare tire used to be in the previous model, eight passenger seating with limited availability, and a 60/40 fold flat seat (like the Toyota Sienna's). PAX tires suffer from short life and limited availability. PAX snow tires and wheels cost $1600 for a set of four increasing the high price of ownership. Dealers are supposed to have a spare PAX tire available as a quick replacement for the customer's damaged PAX tires. But dealers too often do not know about the free replacement policy during the first 50% of tread life or do not stock the PAX tire. The PAX owner may be without a usable tire in case of tire damage because PAX cannot be repaired with normal tire mounting and repair equipment. Costs for the Odyssey rise quickly in higher line models. The highest level Touring model with sales tax and destination charge rises to over $40,000 US dollars. 2007-2008 models can have problems with windshield related wind noise, loud exhaust resonance noise, and power steering pump problems. In 2010 the Odyssey got a facelift. A concept for 2011 was shown at the Chicago Auto Show.

The American Odyssey was sold under the name Honda Lagreat in Japan from 2000 to 2006, with the smaller Japanese Odyssey continuing in Japan and numerous export markets. For the first time the Honda Odyssey was assembled in Canada. The Honda Odyssey got a navigation system in 2000. For the American van, class-leading power led to good acceleration, however transmission technology failed to keep pace with engine power. The 4-speed automatic transmission in 2001 to 2003 models and the 5-speed automatic in 2002 to 2004 models had significant problems with transmission reliability for 1999, 2001, and 2002. The oil jet recall for some 5-speed automatic transmissions did not address or solve the main cause of breakdown. As in the similar transmissions of the Acura TL and MDX, failure of the transmission's third gear clutch pack and other parts remained a problem even after the oil jet recall. Also, road noise issues, rattles, power door failures and added dealer markup - a waiting list of several months was common when it was first released in 1999 - weighed against this powerful and large family cruiser.

The Odyssey was introduced in 1995 as an compact minivan with four swing-open doors as on most sedans rather than the conventional sliding door design. It was Honda's first minivan. The basic vehicle was shared between the Japanese and North American markets. The Odyssey was also the first minivan to have a flat-folding third row seat. Built on the Accord platform and using a 4-cylinder engine like the Accord's, many critics thought the interior was too small. Consumers agreed and the first generation Odyssey was not a sales success. The first generation Odyssey came in two trim levels LX and upscale EX. The LX could fit seven with two front buckets, a three-seat middle bench, and a 2-seat third row bench. The EX could fit six and came with two second row captain's chairs. The Odyssey was rebadged as the Isuzu Oasis, which is now discontinued. This unusual sharing of vehicles resulted from a lack of SUVs in Honda's lineup. Isuzu got from Honda the Odyssey and renamed it the Oasis. Honda got from Isuzu the Rodeo and renamed it the Passport. Acura got the Trooper and renamed it the SLX. The Odyssey was Wheels magazine's Car of the Year for 1995. In 1996 the Honda Odyssey became available for taxi fleet.

A selling point of the 1999 release (second generation) was that the third row seats would fold flat into the floor, instead of requiring removal. Most other vans at the time (especially the Chrysler / Dodge models which were prevalent in America) had a heavy seat which needed to be removed and stored in order to carry cargo. The Odyssey could hold a 4x8 sheet of plywood with the third seat folded down and the second row seats removed.

This page uses content from Wikipedia; see Honda Odyssey, which includes these contributors.