Honda's flagship in the U.S., the Accord is one of the best selling, best reviewed mid size sedans ever sold. Introduced in 1976, the Accord was the best-selling Japanese vehicle in the U.S. for 15 years from 1982 to 1997. In 1982, the Accord became the first Japanese car to be produced in the U.S., when production commenced in Marysville, Ohio. In 2006, the Accord celebrated its 30th anniversary with a restyled seventh generation model, which was mostly unchanged for the following year. The Honda Accord Hybrid was launched in 2005, but is no longer offered.[1]

In fall 2007, the 8th generation Honda Accord launched as a 2007 model with three engine options: two 2.4 liter 4-cylinder engine variants or a 3.5 liter V6. 2008 also features the debut of Honda's new Advanced VTEC system. Today, all Accord coupes and most of the sedans are still assembled in Marysville, Ohio. Some sedans are assembled in Japan (where it is known as the 'Inspire') and Mexico.

For 2011, the US-spec Accord Sedan and Coupe recieve their first mid-cycle facelift as well as a host of interior and aerodynamic upgrades that increase luxury and fuel efficiency by 2mpg city and 3 mpg highway.

There were no changes to the Honda Accord lineup in the US for 2009.

To celebrate 40 years of sales in Australia, Honda offered the Accord Limited Edition which has a 2.4 litre i-VTEC with Bluetooth mobile connectivity, foglamps, rear park assist and deluxe tailored floor mats. This car can be had for $34,990 AUD driveaway. 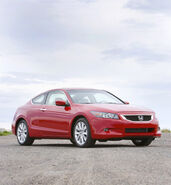 Pricing for the 2008 Accord are yet to be released.

Dealer Invoice for the 2008 Honda Accord:

Today's actual prices by city can be found at CarsDirect.

Estimates for the 2008 Accord, provided by Honda and using the latest EPA estimates [2], are as follows:

Consumer Reports and others rate the previous Accord's reliability 5 stars (out of 5).

In Drive, the Honda Accord is rated by owners 4 out of 5 stars. One owner said "I've tried to kill it but it just won't die." 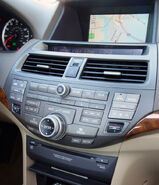 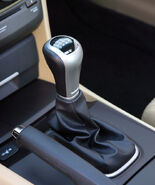 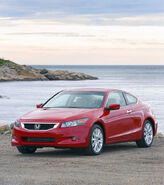 JDM-market Honda Inspire
Add a photo to this gallery

Despite its "family sedan" heritage (and name), the Accord Coupe has attracted a sports sedan following. Older generations of Accords are often purchased by youthful import tuners who perform modifications, install parts from Japanese Market Accords and sometimes engine swaps from the sporty Honda Prelude to create the likeness of a sports sedan. Several web-sites are dedicated to different generations of the Accord (see external links).The newest generation of Accord is the most spacious in its class.

Of the cars surveyed by the RACV, the 2003-2007 Honda Accord V6 is the cheapest prestige car to run on a weekly basis.

The Accord has always been a competively priced model and has always benefitted from some of the best resale values in its class. This is especially true of more scarce models such as the 1993 SE, 1989 SE-i, and 1990-1997 DX trims.

Criticisms of the 2006 Accord are relatively minor:

Modernizing both the interior and exterior, the second generation Accord was mechanically very similar to the original, using the same 75 hp, 1751 cc EK1 CVCC engine. Fuel economy increased by nearly 15%. Vastly improved quality control, however, made this one of the most reliable cars on the US market, a position it still holds today. This automobile included popular features of the time such as shag carpet, velour cabin trim and chrome accents. Models were available in Silver, Sky Blue, and Beige. The LX hatchback offered a digital clock and slightly higher fuel economy (due to its lighter weight.)

The U.S. Department of Transportation had stringent lighting requirements which prevented Honda from including the aerodynamic molded headlight units which were used on Australian, European and Japanese Accords. The U.S. D.O.T. required the use of rectangular sealed beam glass units to prevent fogging and allow for easy and readily available replacement of units damaged by rocks or other road hazards. U.S. Accords were also required to have a side marker light installed on the side of the rear fenders. German Accords included additional reflectors which were embedded into the rear bumper as well as washer sprayers for front and rear lamps. The Japanese Accords were unique from all other markets in that they included adjustable ride height control and were unique in that their side view mirrors were installed on the mid forward fenders.

Original plans for the Accord were to make it a midsize car, along the lines of the Ford Mustang. The Accord was originally planned to be a V6-powered car with a long hood and sporty pretensions. Honda chose the name Accord, reflecting "Honda's desire for accord and harmony between people, society and the automobile."[8]

The initial design was changed to a fuel efficient, low emission vehicle since it was introduced during the fuel crises of the 1970s. In the United States and Japan, a version was produced using Honda's CVCC technology, meeting emission standards of the 1970s and 1980s without a catalytic converter.

Like the smaller Honda Civic, the Accord uses front wheel drive and a transverse (sometimes called "East/West") engine layout.

The European Honda Accord has smaller size and a more Acuralook.

Accords sold worldwide such as in Japan vary greatly from the US models. In Japan, more feature-rich Accords are offered because of a lack of competition with Honda's upscale brand, Acura. Until 1997, the Accord bi-yearly facelift or four-year redesign was always released a year prior in Japan. Older generations of Accords such as the US 1990-1993 (4th Generation) was actually offered in years 1989-1992 in Japan, and 5th Generation from 1993-1996. Other differences were in features. The 1989-1992 (4th generation) offered in other countries received unheard of equipment for an Accord (until recently) such as a Navigation System, TV, mini-disc player, digital automatic climate control, traction control, Anti-Lock brakes, side-marker lights, heated mirrors, outside temperature gauge, an in-cabin air refiner, map lights, seat heaters, standard fog lamps, headlight washers, rear fog light, full-power seats, telescoping bumper pole, half-mast antenna switch. Trims also vary widely in other countries. An Accord Si and Si-T model can also be found in some countries including Japan along with a "Euro R" trim in Europe.

In the US only, the 1990 Accord included what ended up being an unpopular safety feature: automatic shoulder belts. These belts would automatically retract around the driver and passenger upon entry of the vehicle. They were sometimes referred to "suicide" belts because of their quick activation. The lap belt was still required to be worn requiring extra work by the driver and passenger. Honda discontinued the automatic belts in 1992 on all models in the US.

In 1993, there were a total of 11 different trims offered for the Accord. The DX, LX, 10th Anniversary Edition, EX, and SE. All trims included a driver-side airbag, however only the SE sedan received both a driver and passenger-side airbag. The passenger-side airbag became standard on all Accords in 1994. Opinions at the time were Honda attempting to lure customer's into purchasing the high-priced SE because of the safety benefit. Other reasons may relate to the SE Sedan being exclusively produced in Japan. This SE also lost some of the features previously seen on the 1989 SE-i such as bronze-tinted glass, steering wheel audio controls and luxury carpeting.

Since the Accord V6 won Australia's Best Luxury Car Under $57,000, the latest advertisement depicts that the Accord can make Audis more jealous.

Retrieved from "https://automobile.fandom.com/wiki/Honda_Accord?oldid=105099"
Community content is available under CC-BY-SA unless otherwise noted.