Autopedia
Register
Don't have an account?
Sign In
Advertisement
in: Pages with the First Anniversary Infobox Upgrade, Ford vehicles, Luxury vehicles,
and 16 more

The Ford Thunderbird (or shortened to t-bird ) was a sucessfull answer to the Chevrolet Corvette and remained in production up until 1997. In 2002 the T-Bird was revived with a new version. 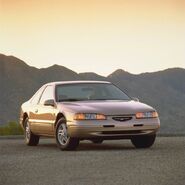 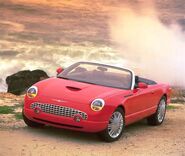 In 1989 there were only two engine options. Also in 1989 the Super Coupe won Motor Trend's "Car of the Year". In 1994 the grille got new headlamps, a new hood, and larger air scoops. On all 1994 Thunderbirds dual front-side air bags became standard. The Thunderbird was reviewed on MotorWeek in 1994. In 1995 the Super Coupe was discontinued. In 1996 the hood was redesigned.

The ninth generation Thunderbird had a top speed of 143 mph. It had three models. In 1984 Ford introduced the "FILA" model. The FILA model ended in 1986. In 1987 the Turbo Coupe won Motor Trend's "Car of the Year". The Turbo Coupe got new features like 16 inch wheels, fog lights, and special trim. In 1988 the Turbo Coupe ended. It was replaced by the Super Coupe in 1989.

This eighth generation Thunderbird did not sell well. In 1980 Ford made the "Silver Anniversary Edition". It had a "Anniversary Glow Silver" color scheme. A garage door opener was standard on the Thunderbird.

The downsized Thunderbird had a wheel base of 114 inches. This generation of the Thunderbird sold very well. In 1978 the Thunderbird's sales were 352,000, the highest sales year in Thunderbird history. This time it sold better than the Grand Prix or the Monte Carlo. Also in 1978 the Diamond Jubilee Edition came out. It had a base price of $12,000. There were two color choices.

A feature on the redesigned Ford Thunderbird was the 'Swing Away' steering wheel. In 1962 Ford introduced the Thunderbird Sports Roadster. But when you turned hard a wheel could collapse on early models. The Landau model was also introduced in 1962. In 1963 woodgrain trim was added to the Landau. 12,193 Landaus were sold.