The Shelby Mustang was a performance muscle car from the 1960s. It was a series of Ford Mustangs which were specially modified by Carroll Shelby's company and sold as a series. The program was factory-sponsored and production was eventually moved in-house. The spirit of the series continues today in the special Mustang Cobra models. 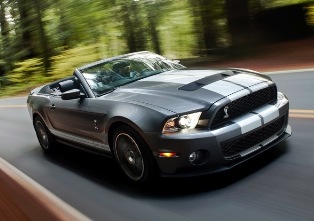 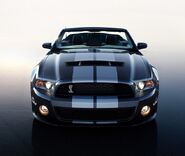 The first Shelby version of the Mustang appeared in 1965. All '65 Shelbys were painted white with (optional) parallel blue stripes from nose to tail. They also featured rocker panel stripes with the GT350 name. The engine was a modified K-code 289ci Windsor V8 with special "Cobra" valve covers, tri-Y headers, a special intake manifold and Holley carburetor increased power from 271 to 306 hp (162 to 228 kW).

The 1966 was differentiated in body color (non-white versions were introduced - colors included blue, red, green and black, as well as the original white) and trim. The "Le Mans" stripes were continued as an option, as in 1965. It featured special quarter-panel windows and rear air scoops on each side and an optional automatic transmission. A fold-down rear seat was now standard as well. Where early 1965 cars had black engine blocks, 1966 and later cars had the 289 engine painted blue.

Shelby struck a deal with the Hertz car rental company to produce a special line of GT350s for rent which were subsequently sold to the public after their rental-car lives were finished. These GT350H cars are quite rare and sought-after today, with some examples selling for more than $120,000. Shelby produced 1000 of these cars; 800 in black, and 50 each in red, white, blue and green. The black cars all had gold stripes, whereas the colored cars only had Shelby side stripes, without the Le Mans top stripes. Shelby would repeat this trick in 1987 with the Shelby CSX-T.

The new 1967 Mustang was followed with a new Shelby. It featured a 1967 Mercury Cougar tail light panel minus the chrome trim, a flip-up spoiler, and two sets of air scoops on each side. This was also the first American car to feature a factory roll bar.

This year also saw the introduction of the GT500 alongside the continued GT350. The new GT500 featured a 428 in³ (7 L) FE Police Interceptor Big-block V8. This is also one of the most famous Shelby Mustangs. A modified GT500 clone, known as Eleanor, featured alongside Nicholas Cage in Gone in Sixty Seconds the 2000 remake of Gone in Sixty Seconds and a blue GT500 is prominently featured in the manga series Gunsmith Cats.

Shelby lost the lease for their factory at Los Angeles International Airport in late 1967 so production of the Shelby cars was moved to Ionia, Michigan under Ford Motor Company control.

Carroll Shelby terminated his agreement with Ford in the summer of 1969. The GT350 and GT500 for the 1969-70 model years received extenisve facelifts. Ford was heavily involved with design and style decisions, with Shelby having very little input. Production of Shelby Mustangs ceased with the 1970 model year. The 1970 models were in fact leftover 1969 models.

Ford introduced the Shelby GT-H version of the Mustang at the 2006 New York Auto Show in April 2006. Like the original GT350H from 1966, the GT-H features gold-on-black paint and will only be available at the Hertz car rental agency. A modest power bump over the regular Mustang GT results in 325 hp (242 kW) and 330 ft·lbf (447 N·m). Features include a 5-speed automatic transmission, and a package from Ford Racing including a 90 mm cold air intake kit, muffler kit, X-pipe, and a cat-back exhaust. Just 500 will be built to celebrate the 40th anniversary of the original.

Shelby and Ford will return with a Shelby-branded Mustang, the Shelby GT500 Cobra for 2007. Introduced at the 2005 New York International Auto Show, the GT500 uses a 5.4 L Modular supercharged V8. 500 hp and 475 ft·lbf (644 N·m) will be available, designed to outperform all previous Mustangs. A Tremec 6-speed manual transmission, suspension tuning, a body kit, and 18 inch wheels will complete the car.

The right to purchase the first 2007 Shelby GT500 was auctioned off at the Barrett-Jackson Collector Car Auction on January 21, 2006 in Scottsdale, Arizona for $648,000. Proceeds will benefit the Carroll Shelby Children's Foundation.

Shelby GT350 at the Scarsdale Concours

The 2007 Shelby Mustang at the New York International Auto Show

For the 2010 model year, the Shelby Mustang GT500 was redesigned along with the base Ford Mustang. As with the 2007–09 GT500, the 2010 includes unique front and rear fascias, hood with functional vents and unique rear spoiler. The rear spoiler includes a functional Gurney flap. Along with new exterior colors, customers have the option of extending the exterior stripes onto the seats. Production was limited to 2000 units.

Much like the 2011 V6 and GT Mustangs, the 2011 Shelby GT500 gets an engine update with an all-new 5.4 L aluminum engine which is 102 pounds lighter than the previous cast-iron engine and uses Ford-patented plasma-coating technology (Plasma transferred wire arc). The inventors of PTWA received the 2009 IPO National Inventor of the Year award. This technology was initially patented and developed by inventors from Flame-Spray. The technology was subsequently improved upon by Ford and Flamespray. With the engine updates, not only has performance improved to 550 horsepower (410 kW) and 510 lb·ft (691 N·m) of torque, but the GT500's gas mileage has improved to 15 mpg-US (16 L/100 km; 18 mpg-imp) city and 23 mpg-US(10 L/100 km; 28 mpg-imp) highway, which was enough to eliminate the U.S.Gas Guzzler Tax. The final production number of the 2011 Shelby GT500 by the end of the year was 5100 units.

Ford also improved upon the handling characteristics of the GT500. The overall stance of the car has been lowered by 11 millimeters in front and 8 millimeters at the rear. The car also features Ford's new Electric Power Assist Steering (EPAS) that improves torque build-up and road feel which delivers quicker and more precise steering, increased effort on the racetrack or winding roads, and reduced effort in low-speed parking maneuvers. The car also has Ford's AdvanceTrac stability control system, which features a sport mode when pressed twice consecutively while stopped with the brakes applied.

The improvements in handling and performance gives the 2011 Shelby GT500 a skidpad rating of 1.0g, and a Virginia International Raceway lap time of 2:58:48, making it as fast as, and sometimes faster than, cars such as the M3, Audi R8 V10, Dodge Viper SRT-10 and Porsche GT3 around this racetrack. Changes to 2012 model year Shelby GT500 included only a new Recaro seat option. The Sterling Gray color was no longer available.

The 2013 models have various improvements and differences compared to the GT500 of 2012 including new front end sheet metal along with standard HID headlamps, along with a new LED tail light assembly. The new 2013 Shelby GT500 also has no grill, due to the massive amount of cooling required for the vehicle. Performance changes include twin fuel pumps (a Mustang GT’s single supply pump, twice over), larger fuel injectors, a grippier and larger-diameter clutch, a larger fan, a three-row intercooler (the previous car used a double-row unit), a beefed-up Tremec 6060 six-speed with an internal oil pump, and a single-piece carbon-fiber driveshaft. Larger Brembo front disc brakes with six-piston calipers, reinforced axle tubes, and aero tweaks to help the car reach 200+mph safely. Ford says the changes have resulted in a 14-percent reduction in drag and a 66-percent increase in front-end downforce. Also new for 2013 is a larger front anti-roll bar and retuned springs. An rpm-adjustable electronic launch-control function is standard, as is four-mode electronic stability control.

A Performance package is also offered, adding two-mode adjustable Bilsteindampers and a Torsen limited-slip rear differential. In addition to the Performance package, a Track package for road racing can be ordered bringing a transmission cooler, a nose-mounted differential cooler for the Torsenlimited-slip unit, and an air-to-oil engine-oil cooler. Wilwood disc brakes was also brought on board with an improved stopping package.

In February 2012, at the Chicago Auto Show, Shelby officially announced that a convertible version of the 2013 GT500 will reach production. The convertible has a limited top speed of 155 miles per hour (249 km/h).

No major changes from the previous year 2013 have been made, however several colors had been discontinued and been made

Car and Driver compared an early build 2007 Shelby GT500 with a 2006 Z51 package Chevrolet Corvette. The Shelby obtained a 12.9 sec quarter-mile while the Corvette ran a 12.8. The Shelby had a 100 hp advantage over the Corvette, but a 616 lb weight disadvantage. Similar tests by the magazine Road & Track reported a 13.1 quarter-mile for the Shelby GT500. Some critics have pointed out that the weight of the car is causing estimated ET's less than expected. The weight of the Shelby GT500 with a driver is nearly 4100 lbs. Muscle Mustangs and Fast Fords (August 2006 issue) were able to coax low-12 second performances out of it (best: 12.257s), with trap speeds of over 117mph.

The heavy iron block V8, with supercharger and water-to-air intercooler, shift the weight bias further forward than the standard Mustang GT (57/43%; front/rear. But the car is said to handle predictably and ride comfortably. According to Car & Driver the GT500 provides the "best [overall] bang for the buck around," but the Corvette is a better performance vehicle..

Retrieved from "https://automobile.fandom.com/wiki/Ford_Shelby_GT500?oldid=111121"
Community content is available under CC-BY-SA unless otherwise noted.