The Ford Ranger name is used on two distinct and unrelated pick-up truck lines by the Ford Motor Company:

In North America, the Ranger is Ford's entry-level pickup truck. In the 1960s and 1970s, it was used on versions of the Ford F-Series. The current line of Rangers was introduced in 1982 for the 1983 model year. It replaced the Ford Courier, an Americanized version of the Mazda B-Series. The compact Ranger was styled after the full-size Ford pickups, and is also offered with a four wheel drive option. The Ford Ranger is currently offered as a 2.3 litre I4, a 3.0 litre V6, and a potent 207 horsepower 4.0 litre V6. All transmissions are 5-speed w/overdrive and come with a choice of manual or automatic.The FX4 version comes with an 8.8 inch rear end, 3 skid plates, and Bilstein shocks. Prior to the 1983 model year, "Ranger" was a trim package available on full-size Ford pickups. This truck uses code R1 (for 2-door) and R4 (for 4-door) in the 5th and 6th positions of the VIN. The Mazda - Ford - Mazda truck saga came full circle in 1993 when the Mazda B-Series truck became a rebadged Ford Ranger in North America. Both vehicles are manufactured at Ford's Saint Paul, Minnesota Twin Cities Assembly Plant, which is scheduled to close in 2008. Ford's future product plans in the compact pickup market segment are expected to be announced closer to the end of Ford Ranger production in the Twin Cities, in 2008.

The 2019 Ford Ranger is set to make a big appearance at some point in 2018, and the new 2020 Bronco in view of the Ranger will show up a year later on a similar chassis. For the Ranger to remain a feasible recommendation versus contenders and nearby Ford's full-size trucks, base valuing should be around the $25,000 stamp. All things considered, expect to see vigorously optioned or conceivable off-street centered variations approach and even surpass $40,000.

The Rangers competitors are the:

The Ford Ranger EV was a battery electric vehicle produced by Ford Motor Company. It was produced starting in 1998 through 2002 and was built on the two wheel drive Ranger's chassis. 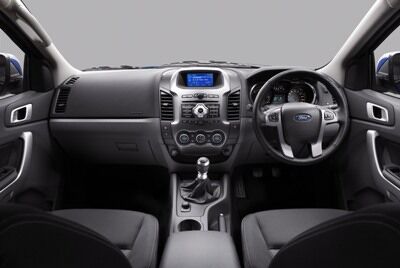 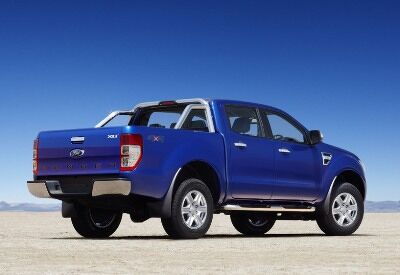 For 1998 the Ranger got another redesign, giving it a longer wheelbase and a three-inch (76 mm) longer cab for the regular cab models. The 1995-97 interior was retained. The twin I-beam front suspension was replaced by a wishbone-style system and the front half of the frame was of "boxed", rather than C-channel construction. Rack and pinion steering was also added. The four-cylinder engine was bumped up to a 2.5 L SOHC I4 giving it a 6% increase in power than the old 2.3 L. It put out 120 hp (89 kW) and 149 lb·ft (202 N·m) of torque. That engine was replaced by a new DOHC 2.3 L Duratec I4 in mid-2001. 2001 also saw the pushrod 4.0 L V6 replaced by the SOHC version from the Explorer, bringing with it a beefier M5OD-R1HD manual transmission. In 2001, the Ranger received a facelift, including a new grille, hood, and front bumper, as well as updated headlights and taillights. In 2004 the Ranger received minor updates to the grille, hood, and front bumper. New front bucket seats were also added in 2004 to meet the new U.S. Federal safety requirements. In 2006 the Ranger received more minor updates to the grille, front turn signals and taillights, along with a bigger rear Ford logo that was now centered in the middle of the tailgate.

In 1993 there was another redesign, with a shape more aerodynamic than before. Overall the truck had smoother lines, and other changes included flush-mounted door glass, wider doors, and slight fender flares. The 1989-style dashboard remained, but the seats and door panels were new. The 2.9 L engine was discontinued. The Mazda M5OD-R1 was now the sole manual transmission option. A new "Splash" model was introduced, which had a flareside bed, unique aluminum wheels, and a special paint scheme. The 1993 Splash models were only available as a regular cab, later models could have either cab. The Mazda B-Series became a rebadged Ranger for the 1994 model year.

A number of changes were made for 1995. The dashboard was completely redesigned, and it allowed room for a passenger's side airbag, installed in 1996. The A4LD transmission was updated. 2.3 L and 3.0 L models got the 4R44E, while 4.0 L trucks got the 4R55E. The front brakes were changed to use the same 2-piston brake calipers as the second generation Explorer, and four-wheel anti-lock brakes were added as standard on 4x4 and 4.0 L models.

The truck received a facelift in 1989, which included flush composite headlamps, new front fenders, hood, and grille, along with some uprgrades to the frame. Inside, there was a modern new dashboard and steering column. Rear-wheel antilock brakes were added, and a 21 US gal (79 L/17 imp gal) fuel tank was now optional on extended-cab models.

The Ranger GT was discontinued, although Ford did build a prototype for 1990 powered by a 3.0 L SHO V6.

Ford began development of the Ranger in 1976, focusing on quality and fuel efficiency. The intent was to build a truck that was as capable as the full-size F-Series, but in a more economical package. The compact Ranger had styling similar to the full-size Ford pickups, used a similar architecture, and was offered with four-wheel drive. The ability to haul a four-foot-wide (1.2 m) sheet of plywood is a common standard for trucks. In the compact Ranger, however, the space between the wheel wells was less than four feet; Ford designed the box with provisions to allow hauling of a standard sheet of plywood.[5]

Mid-year 1986 saw the introduction of the Ranger GT. Only available as a standard cab short bed, it had the 2.9 L Cologne V6 with either a 5-speed Toyo Kogyo manual transmission or an optional A4LD automatic transmission putting power to a Traction-Lok differential with a 3.73 gear ratio. Inside, the truck was equipped with special bucket seats, full instrument cluster, and an optional center console. Front and rear sway bars were installed, and 14x6 aluminum wheels completed the package. A long bed option was added for 1987, and a new ground effects package was introduced in 1988