The Ford Interceptor is a new concept car which debuts at the 2007 North American International Auto Show in Detroit, Michigan. The Interceptor is a retro-styled sedan that reflects a modern interpretation of the classic sporty American muscle cars from the 1960s, like the Ford Galaxie. Ford officially introduced the Interceptor Concept in a company press release dated 31 December 2006. Ford describes the Interceptor design styling as being influenced "...much like a Marine in dress uniform. He looks smart and elegant but you can see the raw power that lies beneath." [1]

The car includes a powered clamshell “shaker” hood, which covers the engine. The midsize sedan is based on a stretched version of the rear wheel drive Mustang's Ford D2C platform, featuring a solid rear axle. The body is proportioned with short front overhang and a long rear overhang, and features a low roofline and a high beltline, when compared to other Ford sedans like the Ford Five Hundred, with a wedged profile. The Interceptor Concept continues with the current Ford horizontal three-bar grille design introduced on the Ford Fusion and Ford Edge.

The Interceptor incorporates a four-point “belt and suspenders” harness seat belt design in the front and rear seats, with inflatable safety belts for rear seat passengers. The four-point belt represents a possible next-generation safety belt system that is designed to be more comfortable and easier to use than traditional three-point belts. The dash, headliner, steering wheel, and four low-back bucket seats are wrapped in leather. There are retractable headrests that deploy from the roof, adjusting fore and aft as well as up and down for each occupant. The audio control panel and climate controls are stowable, and a gated six-speed shifter in the center console. 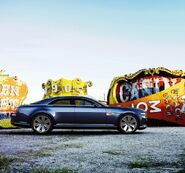 Retrieved from "https://automobile.fandom.com/wiki/Ford_Interceptor?oldid=100154"
Community content is available under CC-BY-SA unless otherwise noted.