The Ford GT began as a concept car designed in anticipation of Ford's centennial year and as part of its drive to showcase and revive its "heritage" names such as Mustang and Thunderbird. Camillo Pardo, the head of Ford's "Living Legends" studio, is credited as the chief designer of the GT and worked under the guidance of J Mays. The designers drew inspiration from Ford's classic GT40 race cars of the 1960s and the GT is sometimes mistaken for its 1960s counterpart.

Positive response on the auto show circuit in 2002 helped persuade the company to produce the car in limited quantities, and the first production versions appeared in 2003. It is a very high-performance, two-seater vehicle with a strong styling resemblance to its racing ancestor and performance to match. The powerplant is a mid-mounted supercharged 5.4 liter V8, producing 550 horsepower (410 kW) and 500 foot-pounds (678 Nm) of torque. Top speed is 212 MPH (322 km/h).

The GT is similar to the original Ford GT40 cars, but bigger, wider, and three inches taller than the original 40 inches (1.02 m) - as a result of which, a potential name for the car was the GT43. Three production prototype cars were shown in 2003 as part of Ford's centenary, and delivery of the production Ford GT began in the fall of 2004

A British company, Safir Engineering, who made continuation GT40s in the 1980s owned the GT40 trademark at that time, and when they completed production, they sold the excess parts, tooling, design, and tradmark to a small Ohio company called Safir GT40 Spares. Safir GT40 Spares licensed the use of the GT40 tradmark to Ford for the initial 2002 show car, but when Ford decided to make the production vehicle, negotiations between the two failed, and as a result the new Ford GT does not wear the badge GT40. It is rumored that Safir GT40 Spares asked $40 million dollars for the rights, but this has never been verified. The partners at Safir GT40 Spares state they have correspondence from Ford declining Safir's $8 million offer. Early cars from the 1960s were simply named "Ford GT". The name "GT40" was the name of Ford's project to prepare the cars for the international endurance racing circuit, and the quest to win the 24 Hours of LeMans. The first 12 prototype vehicles carried serial numbers GT-101 through GT-112. The "production" began and the subsequent cars, the MkI, MkIIs, MkIIIs, and MkVs, numbered GT40-P-1000 through GT40-P-1145, were officially "GT40s". The name of Ford's project, and the serial numbers, thus show the story that "GT40" was only the car's nickname to be false.

Production startup began in spring 2004, with a projected total volume of 4500 cars. The first customers took delivery in September 2004. The GT was assembled and painted by Saleen in their Saleen Special Vehicles facility in Troy, Michigan. The GT is powered by an engine built at Ford's Romeo Engine Plant in Romeo, Michigan. Installation of the engine and transmission along with interior finishing was handled in the SVT building at Ford's Wixom, Michigan plant.

As with many highly desirable new vehicles, when the Ford GT was first released demand outpaced supply, and the cars initially sold for premium prices, with the first selling for over $500,000 to a retired Microsoft executive at a charity auction and other early cars selling for up to $100,000 or more over the suggested retail price ($140,000 - $157,000 depending on options). Independent sources [1] then began gathering and analysing public information on production, sales, and selling prices, and posted that information as a resource for buyers and sellers. By June 2005 prices had dropped to $10,000 to $20,000 over MSRP, and in August 2005 several new GTs had sold on eBay for MSRP. Recognizing the ongoing demand for the car, Ford raised the base sticker by $10,000 to $149,995 in late 2005.

In November 2005 the Ford GTX1, a roadster version of the Ford GT was unveiled in Las Vegas. The $38,000 aftermarket conversion is performed by Genaddi Design Group but approved by Ford 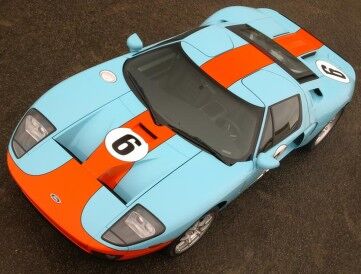 Brakes are four-piston aluminum Brembo monoblock calipers with cross-drilled and vented rotors at all four corners. When the rear canopy is opened, the rear suspension components and engine are visible.

The 5.4L V8 powerplant is all-aluminum and fed by a Lysholm screw-type supercharger. It features unique 4-valve DOHC cylinder heads and a forged rotating assembly. It uses an aluminum block designed by Ford specifically for the GT program with an emphasis on block rigidity. The resulting power output is 550 horsepower and 500 foot-pounds of torque. A Ricardo six-speed manual transmission is fitted featuring a helical limited-slip differential.

According to an article titled "Damn the Corvettes, Full Boost Ahead" by Richard Holdener in the June 2006 issue of Muscle Mustangs & Fast Fords magazine, the magazine tested a completely stock Ford GT on a chassis dyno. The GT put out "nearly" 550 rear-wheel horsepower and "right at" 500 lb-ft of torque. Note that these rear-wheel numbers match the advertised ratings at the flywheel. This suggests that the Ford GT actually produces much more power than advertised when parasitic driveline loss is accounted for. Though underrating engine output on supercars is not necessarily a new practice (former GM engineers have admitted that the ZL1 Camaro and Corvettes produced much closer to 600 hp than their advertised 425, and Ford engineers have admitted that the FE series 428 Cobra Jet was quite underrated) this is rare today, especially for a supercar, where horsepower in that exclusive club confers bragging rights. Note that the GT is also not the only recent supercharged Ford car to be underrated: MM&FF also found that chassis dyno tests on the 2003-04 "Terminator" Mustang Cobras with the supercharged 4.6 DOHC V8s showed them to also produce close to the advertised flywheel horsepower rating at the rear wheels.

The front fenders curve over 18-inch wheels and Goodyear Eagle F1 Supercar tires. In the tradition of original Ford GT racers, the doors cut into the roof. Prominent on the leading edge of the rear quarter panel are functional cooling scoops that channel fresh air to the engine. The rear wheel wells, filled with 19-inch wheels and tires, define the rear of the car, while the accent line from the front cowl rejoins and finishes the car's profile at the integrated “ducktail” spoiler.

Looking in through the backlight, one finds the essence of the sports car in Ford's modular 5.4-liter supercharged V-8 engine. The finishing touches are Ford blue cam covers, each featuring an aluminum coil cover imprinted with the words “Powered by Ford.”

Early production Ford GT experienced many minor problems (including glitches with the electrical and climate control systems, leaking power steering and engine coolant hoses, and a steering column rattle on some cars), and two bigger problems.

In December of 2004, Ford recalled all Ford GTs that had been built up to that point (448 units were built, but only 283 had been shipped to dealers, and only 106 had been delivered to retail customers) because of concerns regarding the strength of the suspension control arms. They had been "squash cast" for added strength, a new process also used by Porsche and Alfa Romeo. But after Ford discovered a crack in one of the high-mileage development cars, the company decided to replace the parts on all the production cars. Ford is not the only manufacturer of exotic cars to have such problems, for example, a similar problem was found on the Ferrari F40.[4]

There was also a TSB (Technical Service Bulletin) to inspect the engine on early cars built in 2004 for an oil leak at the main seal. The finish of some crankshafts was flawed, causing an oil leak. Ford dealers stopped the leak with a new main seal and a "Speedi-Sleeve" around the crankshaft, a device commonly used to repair worn engines in older cars. Some journalists felt that this was an improper fix for an expensive supercar and criticized Ford for not either replacing the defective crankshaft or replacing the entire engine.[5]

There are a few other TSBs for the car, including the need for hose clamps to be adjusted or replaced.

The UK automotive journalist Jeremy Clarkson was one of the first 28 GT owners in the UK. However, as documented on Top Gear and in his column in The Times newspaper, his GT was delivered late, and had ongoing problems with its official UK importer fitted (aftermarket) anti-theft alarm [3] According to Clarkson, the alarm would activate while he was in the car, and sometimes activating every 15 or so minutes for an extended period of time. This led Clarkson to return it to Ford in June 2005 for a full refund - however, he subsequently bought the car back less than 2 months later. When reviewing the GT, Clarkson compared it to the Ford GT40: he barely fit into the GT, while a portion of his head laid outside of the GT40 when the doors closed.[4] The car became a running gag of sorts where Clarkson would comment on how his GT has broken down during news segments. Some of the more notable events in the GT's history are:

Other notable owners include: 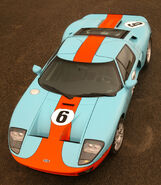 At the 2015 North American International Auto Show and at the unveiling of Forza Motorsport 6 GT40 won the 1966 24 Hours of Le Mans and is expected to run in the 2016 24 Hours of Le Mans to mark the anniversary. The car is to be powered by a newly designed 3.5 liter Twin-turbo|twin-Turbocharger|turbocharged Ford EcoBoost engine|EcoBoost V6 engine making 720 horsepower and 539 foot-pounds of torque. According to Ford, "the GT will exhibit one of the best power-to-weight ratios of any production car," thanks to its lightweight carbon fiber construction. Underpinning the GT is a carbon fiber monocoque bolted to aluminum front and rear subframes covered in carbon fiber body panels. The car also has racing inspired Double wishbone suspension|pushrod suspension, active aerodynamics,and dihedral doors. The windshield of the vehicle is made up of Gorilla Glass manufactured by Corning Inc.Corning which are used in smartphones.The Ford's GT's windshield will be Gorilla Glass, just like your smartphone screen url.

Ford plans to build only 250 units of the GT per year with a sticker price of $599,695. It will be built by the Canadian company Multimatic.

Beginning in December 2016, Ford plans to build the GT at a rate of one car per day until October 2020. 2017 and 2018 model year vehicles will be reserved for selected GT buyers, 2019 vehicles for buyers passed over in the initial selection process, and 2020 vehicles for new customers.