The F-Series is a series of trucks from Ford Motor Company that have been sold for over 5 decades. The most popular variant of the F-Series is the F-150, a full-size pickup truck. It has been the best-selling vehicle in the world for 36 years and the best-selling truck in the United States (and possibly the world) for 36 years. Analysts estimate that the F-Series alone makes up half of the Ford Motor Company's profits in recent years.

The first F-series truck from Ford was introduced in 1948, replacing the company's previous car-based pickup line. It was a modern-looking truck with a one-piece windshield and integrated headlights. The F-series was available as three models:

With the 2007 Model Year, Ford is currently in its 11th Generation of the F-Series. 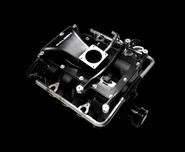 FX4 and Lariat models with bucket seats use a floor-mounted shifter, while all other configurations have a standard column shifter. An optional overhead console uses interchangeable modules so owners can add whatever features they find most useful. Regular cab F-150 models have handy reverse-opening access doors for getting to the storage area behind the seat.

As seen on the FuelEconomy.gov website, the City/Highway MPG averages for the 2006 Ford F-Series are as follows:

The F150 engine family sees four new additions in its line up for 2011. 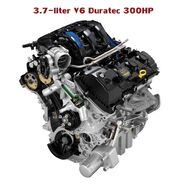 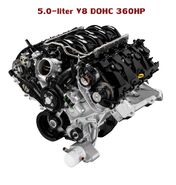 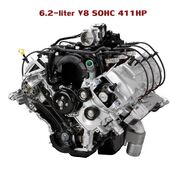 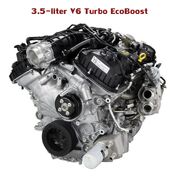 MSN Autos reports that the F150 has "Infrequent problems reported, all with low repair costs" in 6 out of 7 categories. The only problem is in the accessories category, with an occasional failure of the brake shift interlock. This is a minor problem and an easy one to fix, so as such, the F150 earns 5 out of 5 in the reliability category.

Four-wheel antilock disc brakes are standard across the board, and traction control is optional on 2WD V8models. New for 2007, a tire pressure monitoring system is now standard on all models. Unlike some of its competitors, the F-150 does not offer side airbags or stability control. Frontal impact testing by the NHTSAresulted in a perfect five-star rating. In offset-frontal crash testing conducted by the IIHS, the Ford F-150 earned a rating of "Good," the highest available, and a "Best Pick" designation.

Six-gen-f150.jpg
About to go mudding. 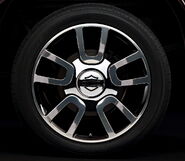 The F-150 has been one of the most dependable off-roading trucks for many years. They are commonly fitted with suspension/body lifts to accommodate bigger tires and to allow more ground clearance.

Like it's cousin the Ford Bronco, older versions came standard with the robust Ford 9" axle. Their straight-axle setup and powerful engines made them ideal for plowing through mud. As such they have become very popular in mud bogging. After-market rear axle differential lockers are usually installed as well, and more demanding owners often swap out their 302/351 engines for a larger one with more torque like the Ford 429 or Ford 460. Common axle swaps for heavy off-road use include the Dana 70 and the Ford 10.25".

According to Kelley Blue Book, "The F-150 is expected to retain a better-than-average residual value, with the SuperCab models at the top of the chart, followed by the SuperCrew and then the Regular Cab. Over a five-year period, the F-150's projected residual value is expected to rate higher than the Chevrolet Silverado 1500 Classic and Dodge Ram, and be on par with the Nissan Titan but below the Toyota Tundra."

The F-series was redesigned for 1953 with a more integrated look. The pickups also acquired their familiar names: F-100, F-250, and the heavy-duty F-350. Interior amenities were new, including a dome light, lighter, arm rests, and sun visors.

The truck was restyled again in 1957 with the hood now merging with the fenders. In the back, the traditional separate-fender body was now called flareside, while a new smooth-sided look was styleside. Four wheel drive, now a common feature, was a new addition to the truck in 1959.

The truck was completely redesigned for 1961 with a wider look, and styleside trucks got an integrated cab and box. Power was over 200 hp with the 1965 refresh of the powertrain. In 1965, the Twin I-Beam was introduced. The front leaf springs were replaced by coil front suspension. Also, in 1965 a four-door crew cab model was released. The 1965 and 1966 trucks have a "TWIN I-BEAM" emblem on the front fender.

Another refresh came in 1967 along with a now-familiar name: the upscale Ranger trim line. A powertrain refresh. A 4-door crew cab version was introduced in 1969, still a popular option. The top trim for 1970 was named Ranger XLT.

The fifth generation F-Series is also locally produced in Brazil.

The truck was redesigned in 1973 with an automatictransmission option. Other changes included the 1974 introduction of the extended cab "SuperCab" version. A luxury Lariat trim was introduced for 1978. That same year, the F-series became the best-selling vehicle in America, a position it has continued to hold since.

The next major redesign came in 1980. The new truck had a squarer look, with sharp lines and flat panels. The Ranger trim line was dropped in 1982, since that name was to be applied to the new Ford Ranger compact pickup. Trim options were now XL, XLT, and XLT Lariat. The big-block V8 was dropped for 1980, but added again in 1983 along with a Diesel option. The base model was renamed to the now-familiar F-150 for 1984. In 1985 fuel injection became optional in the 5.0L. In 1986 this became the only 5.0L offered.

The 1987 refresh was evolutionary. The design was more streamlined, and maintenance items were made simpler. Rear antilock brakes were now standard, the first truck to boast this. The manual transmission was revised with five speeds in 1988, and the flareside box was dropped. For 1987 the 4.9L had standard fuel injection; for 1988, the 5.8L and 7.5L also gained fuel injection, with 1988 being the first year no carbureted engines were offered. 1988 also saw the replacement of the 6.9L diesel with a 7.3L International Harvester IDI diesel.

Four wheel drive improvements included the addition of automatic locking hubs for the F-150 in 1989, and for the rest in 1991. The 5.0 L truck also had an optional "Touch Drive" electronic transfer case.

The 1992 truck was much more rounded and aerodynamic in appearance, and the flareside returned until 1996. The Lightning appeared in 1993. A CD player option was new for 1994, as was a driver's-side airbag and "CHMSL" third brake light. Following the lead of the Explorer, an Eddie Bauer trim line was added for 1994 and continued utill 1996.

Also at this time, Ford and Centurion Vehicles of White Pigeon, Michigan teamed up, to make the first Excursion like vehicle. It was a Ford F-350 crew cab, with the rear half of a Ford Bronco, on a Ford regular cab long bed frame. Known as a C-350 or C-150. There was no C-250 Centurion. [11]They were made in few production numbers, and now concidered a rare, collectible vehicle.

Ford trailed rival General Motors trucks for much of the ninth generation, though sales steadily rose each year. 500,000 F-Series trucks were sold in 1992, but this rose to nearly 800,000 by 1996, and the Ford had overtaken the combined Chevrolet and GMC pickup sales for the first time in a decade.

Ford took the aero styling to its conclusion for 1997 with an extremely round nose on the new F-series. The "Super Duty" F series did not yet exist, so an F-250 was offered which was an F-150 with heavier duty axles and suspension, along with odd 7 lug wheels. With the arrival of the Super Duty, this F-250 "light duty" was offered as the "7700" package for the F-150 (noted on the tailgate emblem). A wide variety of body options were available: regular cab and SuperCab, standard or flareside boxes, and short and long beds. A new Lightning was introduced in 1999, and Harley-Davidson and King Ranch versions were also created. In 2001 the SuperCrew cab was introduced.

Sales of the F-150 surged in the tenth generation to 750,000 to over 900,000 in 2001 as the General Motors and Dodge products lagged. Ford's sales dropped, however, for the final years of this generation as the redesigned Dodge trucks were released. 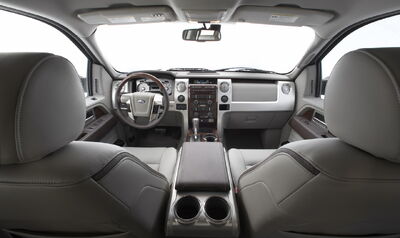 The previous F-150 was continued in production until the summer of 2004 as the Heritage model.

The new F-150 won the North American Truck of the Year Award and was Motor Trend magazine's Truck of the Year for 2004. It also beat the three-time winning Chevrolet Silverado for Car and Driver magazine's Best Pickup Truck for 2004 and 2005. Additionally, over 912,000 F-150s were sold in 2004, giving it a single-year sales record.

The F-150 will have a new Harley-Davidson trim line in 2006 with an available all-wheel drive, while the Super Duty will have an available Amarillo package or the Chrome package for the Lariat.

For 2005 the "Super Duty" model was redesigned. These included a new grille, new interior, and factory installed trailer brake controller and upfitter switches. The engines were also upgraded, with the new 3 valve 5.4L V8 and 6.8L V10 putting out 300 and 362 horsepower, respectively. The Powerstroke Diesel was also modified, boosting torque from 560ft/lb to 570ft/lb, but horsepower stayed at 325.

The truck was going to be completely redesigned for the 2007 model year, but it was recently announced that quality issues will push it back to a 2008 model. The new 2008 model will introduce a new 6.4 L twin-turbo Power Stroke Diesel V8 to the replace the problematic 6.0 L Power Stroke Diesel V8. The engine is said to produce 350 hp (260 kW) and 650 ft·lbf (880 N·m), beating the DaimlerChrysler's Cummins ISB I6 on both power and torque, but just shy of beating the 360 Hp/ 660lb torque of the General Motors Duramax.