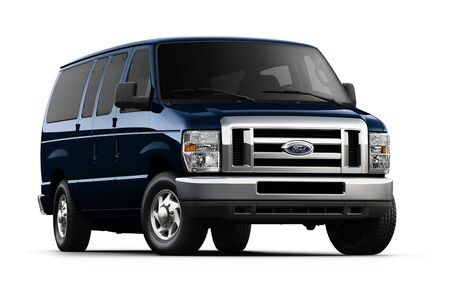 The Ford E-Series, formerly named and also known as the Econoline or "Club Wagon", is a line of fullsize vans (both cargo and passenger) and truck chassis from the Ford Motor Company. The E-Series is related to the Ford F-Series line of pickup trucks. The line was introduced in 1961 and its descendants are still produced today. The Econoline is produced at Ford's Lorain, Ohio and Avon Lake, Ohio plants. A derivative called the Ford Chateau Wagon is marketed in the Philippines.

The first E-Series was based on the compact Ford Falcon, sized roughly to compete with the 1961 Chevrolet Corvair Sportvan and Volkswagen Type 2, which was 172.3 in long. The first E-Series had a flat nose with the engine between and behind the front seats, later adopted by the Chevrolet Van and Dodge A100. It was an immediate success with utilities like the Bell Telephone System. It was originally offered as a cargo van, 8-passenger fullsize van with 3 rows of seats and as a pickup truck. Engines were Ford's 170 in³ and 240 in³ six-cylinder engines. This is probably the van that inspired the "Mystery Machine" from Scooby Doo, and several owners have decorated their vans as such.

The 1968 Ford E-Series revolutionized van design by moving the engine all the way to the front under a short hood. These would be the first vans used as the basis for the now popular Class C van cab motorhomes, a class still dominated by Ford. The 1968 E-Series also used Ford's "Twin I-Beam" front suspension design, and was now available with a V8 engine. Over the next six years, the "Big Three" (GM, Chrysler and Ford) would all redesign their vans, with hoods gradually evolving to a short conventional truck-like hood, and evolving from being based on compact cars to using components from full-sized pickup trucks.

The E-Series was redesigned in 1975 with more ergonomic controls and a full frame, allowing it to be used as a truck chassis. The nose now had a proper hood, very close to the length used today. This bodystyle continued until 1991. In 1979 the front grille and headlights were facelifted and square headlights were incorporated. In 1983, Ford's "Blue Oval" logo was integrated into the front grille. Van conversions became a popular alternative to sparse factory passenger accommodations.

The redesigned 1992 E-Series featured either a 4.9 L I6, 5.0 L V8, 5.8 L V8, 7.5 L V8, or a 7.3 L Powerstroke diesel V8 engine. The consumer-oriented Chateau Club Wagon version was Motor Trend magazine's Truck of the Year for 1992. The design was more aerodynamic, and no longer featured taillight lenses shared with the F-Series trucks.

With this body style, Ford dominated the market for 15 passenger vans once created by Dodge. It was favored by churches, but the high heavy-duty body became notorious for rollover incidents due to the high center of gravity and the weight of 15 adults. For this reason it is recommended that only trained drivers be used, and nothing be carried on the roof of such vehicles.

For 2001, Ford again refreshed the E-Series, with a new E-150 Traveler model targeted at families.

By this time, the Econoline was known as the "E-Series," and was sold as such in the literature on commercial vans and ambulance packages, another category dominated by Ford. Heavy-duty cutaway van models also featured "E-350" or "E-450" badging on the front fenders. Starting in 2001, however, Ford officially fully rebranded the Econoline as the E-Series in all badging and consumer sales literature. With the development of more sophisticated 7 passenger minivans, the market for passenger versions declined, so the "Club Wagon" designation for passenger wagons has been dropped. Full-sized vans have a very high floor, and seats which are bolted to the floor, whereas the latest minivans feature powered middle windows, and seats which fold into the floor. However, compared to popular 3-row SUVs, only full-size vans have the towing and payload and optional V10 or diesel power of full-sized pickups and room for 15 or 8 passengers plus their baggage.

For 2003, Ford refreshed the E-Series by changing the grille style, incorporating an integral Ford logo.

The E-series is an excellent tow vehicle, due to the available GCWR (Gross Combined Weight Rating) of up to 20,000 pounds, and it's relatively low curb weight. No other van or SUV can match its available towing capacity and payload.

As of 2006, the press said that the E-Series would soon be redesigned, but there are no details. The GM competition is a minor update of a 1990s design, while Chrysler has abandoned a body style essentially unchanged from the 1970s in favor of the Sprinter, a narrow European Mercedes-Benz van with a 150 hp turbodiesel engine, which has found favor primarily in commercial delivery with its high roof, and high-end, high-mileage Class C RV.

The e-series will be redesigned for 2009.