The Ford Courier is a compact pickup truck which was sold in the United States and Canada from 1972 to 1982 and elsewhere to the present day. It is considered to be the forerunner of the Ford Ranger.

The Courier name has also been used on various other Ford models since 1952.

The Courier was manufactured by Toyo Kogyo (Mazda)[1], and imported and sold by Ford Motor Company as a response to the unforeseen popularity of the small Toyota and Nissan/Datsun pickups among young buyers in the West. Like the other mini-pickups of the time, it featured a sub-2 liter four cylinder engine, a four speed manual transmission, rear wheel drive, an impressive load capability of 1,400 lb (635 kg) considering its size, and a fairly small price tag compared to full size pickups of the time.

To circumvent the 25% Chicken tax on light trucks, Couriers (as with Chevrolet LUV's) were imported in "cab chassis" configurations, which included the entire light truck, less the cargo box or truck bed and were only subject to a 4% tariff.[2] Subsequently, a truck bed would be attached to the chassis and the vehicle could be sold as a light truck. 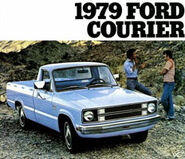 In 1977 the Courier was redesigned, and a host of new options was available. The truck was available with front disc brakes, as well as a Ford built 2.3 liter engine option (which was the same as that of the Ford Pinto and Mustang II). The key identifying feature of the Courier from Mazda's B-Series was still the singular headlights, although with park and indicator lights placed inset starting in '78 ('77s still had the turn signal lights in the bumper).

The Courier continued to be sold until 1982, in which year power steering was added. For 1983, Ford introduced its own Ford Ranger to fill its compact truck segment, which replaced the Courier in the U.S. and Canadian markets.

A Ford Fiesta-based Courier pickup, smaller than the Ranger, is currently sold in Mexico.

The first generation Ford Courier was introduced in 1972 and sold for a little over $2,000 when introduced—close to the price of an F-100.

The body styling was effectively that of the related Mazda B-series, however its frontal treatment was unique, with a grille designed to emulate the larger Ford F-series, and large single headlights, instead of the B-series' smaller twin units.

Between 1979 and 1982 a number of electric Ford Couriers were produced - Jet Industries purchased "vehicle gliders" (Ford Courier bodies minus their engines), and put in a series DC motor and lead acid batteries, to produce the Jet Industries ElectraVan 750.

These were sold mainly for service trucks, general to local government departments. They had a top speed around 70 mph (113 km/h), and would go 50 to 60 miles (97 km) on a full charge. A number of these vehicles still exist, usually with upgraded motor control systems and higher voltage battery packs.

A number of Couriers were sold as cab-chassis units, with rear decking. These were commonly fitted with rear utility bodies, flatbed decks, box truck bodywork, camper bodies or "stepside" deckbeds.

While the Courier's engine bay was always fitted with inline 4-cylinder motors at the factory, owners have fitted larger engines into their Couriers, notably Ford V6 and smallblock V8 units. To cope with the increase in power new drivelines generally are also fitted.

The Ford Courier was never available as an OEM 4 wheel drive version in the US (the Mazda B-series didn’t get 4 wheel drive until 1986). However, there were several companies doing 4x4 conversions of the Ford Courier by adding a transfer case and solid front axle beginning in 1975 . From 1975 to 1979 Northwest ATV in Kelso Washington converted about 1500 Couriers to 4WD, which were sold as the Ford Courier Sasquatch, in the WA, OR, CA, and ID markets only. (Ford Sasquatch brochure). Other conversions of early 80's Couriers were done by other companies as well.


Cite error: <ref> tags exist, but no <references/> tag was found
Retrieved from "https://automobile.fandom.com/wiki/Ford_Courier?oldid=73798"
Community content is available under CC-BY-SA unless otherwise noted.