Ford introduced the Bronco as its first SUV in 1966. It was one of the earliest American made SUVs and broke ground on creating an entirely new market for cars in the US. The Bronco was produced as a mid-size SUV until 1977 without any major modifications to the body or trim. Certain features as power steering, disc brakes, and larger engines were added through they years, but the design changes were subtle. Broncos continued to be produced from 1978 until 1996 as a full-size two door SUV. Today, there is a fairly large market for 1966-1977 Bronco parts and accessories, and many Broncos are being restored or used for offroading or rock-crawling.

• The only mirrors were a driver side and a rear view mirror.

• In total, there were 24,100 Broncos produced in its first production year.

• Seat belts were added for safety.

• There was an optional 289 c.i. V-8 offered in place of the 6 cylinder engine, which came with new 289 emblems on the front fender.

• There was an optional 5 gallon auxiliary fuel tank available.

• There were 700 Roadsters produced.

• Many changes were made this year, including the discontinuation of the Roadster, in order to get sales back up.

• The dash was changed to steel and was redesigned and painted.

• The doors and mirrors were completely redesigned.

• An option for a swing away tire carrier was added.

• This was the last year for the chrome windshield retaining knobs.

• Bolts are used instead of the chrome windshield knobs.

• This was the last year of the inferior 3 piece wiring harness.

• This was also the last year for the non-vented auxiliary fuel tank. • There were 1,700 Pickups built.

• This was the first year that the Stroppe Baja Bronco was offered. This was a special addition Bronco that is worth much more than other Broncos today.

• The Dana 30 front axle was replaced by the stronger Dana 44.

• The fuse box was moved into the glove compartment with the new style wiring harness.

• The wiper solvent bottle was changed and the pump became an internal style.

• The Pickup model of the Bronco was discontinued.

• There were now interior colors available for the Bronco. • The column shifter handle design was changed to shift more smoothly.

• The air cleaner was redesigned to help increase air flow.

• This is the first year for the power steering option with a 302.

• This was also the first year for the C-4 Automatic Transmission with the V-8.

• 1973 was the only year that an orange was available as an interior color.

• The explorer package was introduced.

• The transfer-case shifter was switched from a T-shift to to the J-Style shifter.

• A dome light was put into the electric wiper cover, offering the first interior light in a Bronco.

• This was the only year that a red interior was available.

• During mid-year, an electronic ignition was incorporated into the 302.

• The steering wheel was changed to accept a long thin vinyl horn instead of the pot metal button.

• This was the last year for the Bill Stroppe Baja Bronco.

• Emissions regulations by the government caused many changes to vehicles from 1975 until present.

• Unleaded fuel was introduced to the Bronco.

• There were catalytic converters installed due to the pollution control laws.

• Disk brakes were introduced on the front axle, with the option of making them power.

• The rear brakes were upgraded to a larger drum size.

• The Ranger Package was introduced.

• The steering column design was changed.

• The power steering box was given a quicker turning radius, 3.8 turns lock to lock.

• This was the only year for the gas tank doors instead of filler caps on the exterior of the body.

• The rear tank was completely redesigned. It was now 14.4 Gallons instead of 12.

• There were 14,600 Wagons produced during the last year that the classic Bronco would be produced.

Although the Bronco was the first SUV to sneak into the American automobile market, it was not the first SUV produced. There was the Scout produced by International Harvester, Jeepster by Jeep, and Land Rover, which were all produced before the Bronco came into the picture. The reason the Bronco became such a big hit, however, is because none of the other 4x4 vehicles offered any of the same luxuries as a passenger car that most Americans were used to driving. The Bronco bridged the gap between rugged 4x4 machines, and luxury driving cars. It offered people the ability to take their comfort offroad and explore the places they had never gone before. Today, 1966-1977 Broncos will be spotted far more often than these other early 4x4 vehicles. Broncos are known for their extreme performance in rock-crawling competitions, and are a popular choice for modifications.

Development of the full-size Bronco. The second-generation Broncos began their long history at Ford's Product Design Center in 1972. Code named "Project Short Horn", the designers and engineers at Ford were working on an all-new Bronco that would compete with and ultimately far surpass the extremely popular full-size Blazer from General Motors. Working with many sets of requirements imposed on them by Ford and learning from mistakes made by Chevrolet on the Blazer, the designers were able to come up with a vehicle that had many features never before seen in a sporty-utility vehicle. Ford required the new Bronco to be based on the new '73 F-100 and for it to be ready for the original release date of the 1974 model year. The new Bronco also had to use the F-100 doors with no modifications to save on production cost and had to have a removable hard top to compete with the Blazer.

It has been speculated by many that the onset of the 1973 OPEC oil embargo was by far the main reason that the introduction of the full-size Bronco was delayed until the 1978 model year. By 1977 the energy crisis had eased up and the first generation Broncos still being sold were terribly out dated by this time. Sales were sharply falling due to the extreme popularity of the much more modern and versatile Blazer. Ford also finally had a new, environmentally-friendly engine in use in its 4x4 trucks by 1977, the 351M/400, which could only mean one thing: The Full Size Bronco's time had finally come!

In mid 1977 Ford introduced the first full-size Broncos for the 1978 model year. The long awaited '78 Bronco was so popular that many people had to wait six months or longer to get one from their local Ford dealers. Consumers just couldn't get enough of them. Even the automobile and truck magazines of the time raved on and on about the new full-size Broncos. The '78 Bronco practically swept-the-boards with 4x4 and truck-of-the-year awards. Pickup, Van, & 4WD magazine even stated, "It's a guess, but perhaps a very safe bet, that Chevy, Dodge, and Jeep engineers have '78 Broncos in their labs now, taking a look and calculating ways and means for catching up".

1978 Ford released the first full size Bronco based on a fullsize truck platform it featured only 351ci 2BBL Modified V8 and optional 400ci 2BBL Modified V8 motors, full and part time 4wd,Dana 44 front,Ford 9" rear axles and New Process transfer case,they were available with 4 speed manual or a C6 3 speed automatic transmission,this generation continued through 1979 with the addition of square head lamps as standard previously only available on higher end models Horsepower was 163hp for the 351ci V8 and 169hp for the 400ci V8

1980 saw the release of the second generation of full size Broncos again designed around a Ford F 150 chassis it carried the same styling of it's pickup brothers, featuring inset turn signals, a hood that set in to the front fenders and wraparound tail lights also a slightly rounder grill was added compared to the flatter front of the previous generation,also new for 1980 was the twin-traction beam Dana 44 front axle which replaced the old rigid axle on previous Broncos,transmissions included a 4 speed manual and C6 3 speed automatic.

Motor options were expanded in 1980 featuring a 300ci 1BBL I6 as standard, optional 302ci 2BBL V8 and the 351ci 2BBL Modified V8 was carried over from the previous generation.

1983 new convenience options were added including a head lamp on warning buzzer and underhood light with 20 ft cord.

1984 featured a new optional 351ci Windsor V8 with a 4BBL carburetor this was called the 351 H.O. for High Output rated at 210hp,a new under hood tool box option was also added.

1986 featured the addition of an Eddie Bauer trim level to the Bronco which included a lower two tone tan stripe.

Trim levels for this generation included Custom,XL,XLT,Ranger,Lariat and Eddie Bauer.

1987 saw the introduction of a more aerodynamic Ford truck line and the full size Bronco was updated along with the other F series pickups,styling changes included a smoother aerodynamic front clip with flush head lamps and wraparound turn signals that were moved to the sides of the head lamps,standard rear Anti-lock breaks and 4000 Lbs rated rear step bumper were also among the improvements,Borg Warner 1345 and the electric shift 1356 transfer cases were now being used,the venerable Ford 9" rear axle was replaced by the Ford 8.8" rear sometime during the last generation,transmissions included 4 speed manual and 3 and 4 speed automatics.

1988 the the 351ci V8 gets Electronic Fuel Injection along with better fuel economy but horsepower stayed at 210, serpentine drive belts are now standard and a 5 speed manual is standard as well.

1989 the 4 speed manual returns as a optional feature.

1990 the all new E4OD electronically controlled Heavy Duty 4 speed automatic transmission was now offered with the 351ci V8 but the 3 speed C6 automatic was still a option.

1991 a special 25th silver anniversary trim package and all black Nite package were now available the 4 speed E4OD auto was now available on all Motor options. 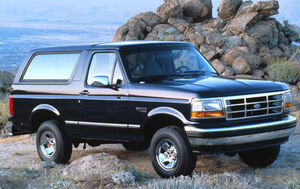 1992 saw the redesign of the Ford F series trucks and again the Bronco followed suit, styling changes included a grille with two vertical bars and two horizontal bars, turn signals were moved under the headlamps and wrapped around the sides the parking lights were also moved to the sides, corners were smoother than the previous generation and the hood featured less drop at the front, power mirrors were now an available option.

Transmissions include 4 and 5 speed manuals, the 4 speed E4OD automatic was now standard with the old 3 speed C6 available as special order item.

1993 four wheel anti-lock breaks became standard, although available on other trucks the 300ci Inline-6 was dropped from the Bronco lineup, and the Nite trim level was also dropped.

1994 saw a standard driver side SRS airbag introduced to the Bronco, a XLT sport package was offered with body colored grille and bumpers.

1995 body or two tone colored molded side steps were a option the 302ci EFI V8 got a power boost now with 195 horsepower.

1996 was the last year for the Ford Bronco as sales of two door SUV's were down across the board it would be replaced by the Expedition which had four doors and competed with Chevrolet's Tahoe more effectively ,the only change for this year was the in mirror turn signals available on XLT and Eddie Bauer models.

Trim levels for this generation were Custom,XL,XLT,Eddie Bauer and Nite (discontinued in 1993) models

Retrieved from "https://automobile.fandom.com/wiki/Ford_Bronco?oldid=70735"
Community content is available under CC-BY-SA unless otherwise noted.