The Fiat Stilo was introduced in 2001 as a replacement for the successful Bravo and Brava models and Fiat's entry into the popular 'Family Hatchback' class. The Stilo was designed from the ground up, and was predicted to be the new volume seller which would carry Fiat into the 21st Century.

The Stilo is available in three-door, five-door and Multiwagon variants, with a variety of engines and models geared either towards economy or performance. Boasting high equipment levels, average fuel economy and excellent safety features, the Stilo was one of the company's best selling models before the arrival of the Fiat Nuova Panda and most recently Fiat Grande Punto. More recently, however the Stilo looks dated, both from an engineering perspective and in the design department. The Stilo will be replaced in the summer of 2007 by the Brava.

As the Stilo is being replaced soon, in major markets such as Great Britain Fiat has dramatically slimmed down the model range. Gone are the five-door and Multiwagon variants, along with a large number of engines - only the 1.4 petrol and 1.9 MultiJet diesels are available, in Active Sport and Sporting trim only. However, the smaller model range has also received some minor tweaking, namely a change to the styling of the grill and front bumper and a complete modification of the colour charts which corresponds to new fabrics and colours being available for the interior. Other minor tweaks for the interior comprise of the relocation of switchgear to make the cabin more ergonomic.

The 2007 Model Year also marked the arrival of the Stilo Blue, a limited edition model with a whole host of options offered as standard. Designed to generate sales and clear stocks, the Blue is sold with the archaic 1.4 litre petrol engine, New Orleans Blue paint and 17-inch alloy wheels. Interior specification includes CD player and electric windows and mirrors.

The 2007 Model Year Stilo is available in only three-door format, in only three trim levels. These are the Blue, Active Sport and Sporting.

A Limited Edition model, the Blue is tasked with seeing the Stilo out of European sales charts. Despite buyers being limited to the 1.4 litre four-cylinder petrol engine, the Blue offers generous equipment levels, and benefits from the recent range modifications. The Blue is what Fiat think epitomises the typical British Stilo - sales statistics show that New Orleans Blue, which the car is supplied soley in, is the most popular colour, and many Stilos leave Fiat dealers on the 17-inch alloys which are standard on the Blue.

Inside, the Blue benefits from the recently-added 'Inox' patterned cloth.

The Active Sport has equipment levels similar to the Blue, with the added choice of exterior paint colour. Again limited to the 1.4 litre engine, the Active Sport does at least benefit from the entire options list - which is not very expansive seeing as the model is due to be replaced. Standard equipment for the Active Sport includes metallic paint and air conditioning.

The interior remains the 'Inox' cloth.

The Sporting is the current top of the range. The engine choice is limited to the 1.9 16v MultiJet diesel, but being top of the range, the car has a massive spec sheet - 17-inch alloys, full leather interior, automatic air conditioning and a body styling kit are standard fare. The diesel engine develops 150bhp, and is the most powerful engine in the current range - and certainly the most torquey, at 225 lb/ft. This replaces the older 115bhp/120bhp 8 valve versions.

Previous versions of the Sporting model were more adventurous, with the 5-cylinder 2.4 litre engine and the sequential Selespeed gearbox - both of which were sadly dropped. More interesting is the options lists of previous versions - they featured such gems as 'keyless go' and even a radar controlled cruise control system, which was dropped after it caused 'unwanted interference'.

Reliability is the Fiat Stilo's weaker points. The car was rushed out at a time when the Fiat management was in turmoil, with workers' unions rebelling and market shares in free fall. Thus, corners in the car's development were cut, and the end product shows - in a recent customer satisfaction survey polled by BBC TopGear, the Fiat Stilo scored only one out of five stars for both electrical and engine/gearbox reliability.

Overall satisfaction of ownership appeared quite poor indeed - the fit and finish was awarded two stars, customer car only one, and ownership costs two out of five. In the survey, the Fiat Stilo finished in 154th place from 159 cars.

EuroNCAP rate the Fiat Stilo as a four-star car - which is the average rating for the family segment. The rating breaks down into the following:

The Stilo tested by EuroNCAP was a five-door, left-hand drive version, and the test results were obtained by a re-test. The modified car (which was on general sale) featured a strengthened pedal box, body frame structure, fascia beam and and installment of an energy absorbing element behind the fascia and rear doors. 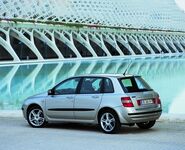 The Fiat Stilo, at its peak, went head to head with the European Ford Focus and contemporary competition from the Volkswagen Golf, Peugeot 307 and SEAT Leon. The Stilo was as good as the similarly-aged generations of the aforementioned competition, but all of the cars have been renewed recently, leaving the Stilo trailing way behind the competition.

The Multiwagon variant of the Stilo has no real price competition, but size-wise is a match for the Audi A3 Sportback.

No hybrid versions of the Stilo were ever produced, but in terms of economy the Stilo can beat the Toyota Prius in the miles-per-gallon stakes.

A different version of the Stilo is built for the South American market, launched in 2003. The South American Stilo is available only in five-door format, and was originally given the 1.8 petrol and 1.9 JTD engines. The range mimicked the European one, with the launch of an Abarth and Schumacher models in 2005, but the most recent addition to the range is an engine which can run on a mixture of petrol and ethanol produced from sugar cane crops - this renewable fuel powers about a half of Brazil's transport alone.

In 2007, the range is to be revamped, with a new petrol engine which will be produced in Argentina and a facelift. The South American Stilo will not be replaced by the Fiat Brava, apart from in Chile and Venezuela.