Start a Wiki
The Ferrari Superamerica 45 is a one-off with a rotating targa hardtop based on the 599 GTB, that was commissioned to Ferrari by longtime Ferrari enthusiast and collector Peter Kalikow to commemorate his 45 years as a Ferrari client. Part of Ferrari's Special Project programme, it was designed at Centro Stile Ferrari and engineered in-house by Ferrari. The car made its public debut at Concorso d'Eleganza Villa d'Este on 20 May 2011. The carbon fibre hardtop roof incorporates a rear screen and rotates around a horizontal axis behind the cabin, a mechanism similar to that of the Ferrari 575 Superamerica. The boot, also made from carbon fibre, has been redesigned to house the roof when open and to increase downforce at the rear of the car. As well as being finished in Blu Antille, other key visual features include a chromed front grille, body coloured wheels, carbon fibre panels and special burnished aluminum A-pillars, wing mirrors and door handles. The interior features a combination of Cuoio leather trim and Blu Scuro carbon fibre as well as a latest-generation touch-screen infotainment system. 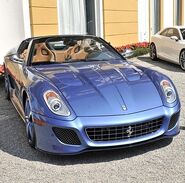 Retrieved from "https://automobile.fandom.com/wiki/Ferrari_Superamerica_45?oldid=108271"
Community content is available under CC-BY-SA unless otherwise noted.