The P540 was revealed to the public on December 11, 2009, but had been spotted in spy shots several months previous to this.[1]

Designed by Pininfarina and built in Maranello, this car was designed to homologate with international safety and homologation requirements. Using finite element analysis and carbon fibre, the car's chassis was stiffened for the conversion to a convertible body style. Total time of development was 14 months.

There is one avalable color: 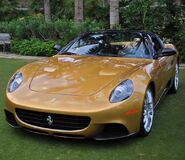 Retrieved from "https://automobile.fandom.com/wiki/Ferrari_P540_Superfast_Aperta?oldid=108245"
Community content is available under CC-BY-SA unless otherwise noted.