The Ferrari FXX-K is a high performance race car and prototype built by automobile manufacturer Ferrari in Maranello, Italy and designed by architect Flavio Manzoni director of Centro Stile Ferrari. The FXX-K is based on

the street-legal LaFerrari. Production of the FXX-K began in 2015 and ended in 2017. 40 units were produced.

The name 'FXX-K' is actually Ferrari’s research and development program based around a laboratory car which is based on Maranello’s first hybrid, the LaFerrari. The K in the new car’s name is referring to the kinetic energy recovery system (KERS) which is used to maximize performance. The FXX-K will not be used in competing and was developed to be completely uncompromising. It uses a range of modern innovations that will ensure maximum performance anywhere.

The FXX-K Evo was unveiled at the Ferrari Finali Mondiali 2017 on 28 October 2017 at Stazione Leopolda in Florence during the Ferrari 70th Anniversary celebration. It was presented in an unusual light gray color with the number 70 on the doors. 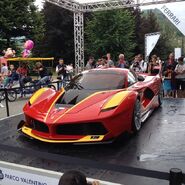 
Retrieved from "https://automobile.fandom.com/wiki/Ferrari_FXX-K?oldid=108072"
Community content is available under CC-BY-SA unless otherwise noted.