The Ferrari F430 Spider BioFuel Concept is a concept car built by Ferrari and introduced at the 2008 NAIAS to showcase Ferrari's foray into environmentally-responsible and green motoring.

Ferrari has chosen Detroit as the venue for the presentation at a biofuel-powered F430 Spider in recognition of growing interest in North America in alternative sources of energy. The development of an engine powered by the biofuel E85 comes as part of a research and development program announced during the Technological Innovation Conference held at Maranello last June as part of our 60th Anniversary Celebrations. On that particular occasion, Ferrari also unveiled projects focused on improving the energy of the whole car which would in turn lower fuel consumption and emissions levels. The ultimate aim being, of course, to cut the latter by 40% by 2012.

Once again, in fact, the track has proved an excellent testing ground for innovative solutions which, if successful, can then be passed on to production cars. Such is the efficiency of the transfer of track technology to road cars at Maranello that all of the Prancing Horse's cars can already use up to 10% ethanol without any modification whatsoever.

By developing this technological demonstration prototype however, Ferrari has proved category that it can offer the technological solutions demanded by the market demands without impinging on the distinctly sporty, high performance character and supreme driving pleasure of the unique cars it builds at Maranello.

In the case of the F430 Spider Biofuel, certain modifications were made to the fuel feed system and most importantly to the engine CPU to allow the engine use E85. Developing the CPU, two fuels (Flex Fuel) can be used by the engine with the same compression ratio. All of the other technical characteristics have remained unchanged with respect to a standard production engine, however. The use of this type of biofuel and the modifications made have resulted in a significant increase in maximum power output (+ 10 hp at the same rpm) and torque (+ 4%) yet overall weight was unchanged. The advantages to the environment translate too into a 5% drop in CO2 emissions. 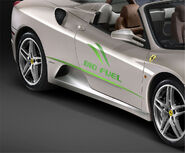 The Spider is basically an upgraded version of the basic Ferrari Spider. It would most likely be used for racing if released.

The vehicle has not yey been released. However, if it were to be released, it would most likely be only avlalble to racing teams.

Retrieved from "https://automobile.fandom.com/wiki/Ferrari_F430_Spider_BioFuel_Concept?oldid=108166"
Community content is available under CC-BY-SA unless otherwise noted.