The Ferrari F430 was a high-performance sports car produced by the Italian automaker Ferrari to succeed the Ferrari 360 Modena. It debuted at the 2004 Paris Motor Show. European left-hand drive sales began in November, 2004, but right-hand drive sales did not start until Spring 2005, and the United States did not get the F430 until Summer 2005. It was replaced by the 458 for the 2010 model year.

The F430's chassis is heavily based on its predecessor, the 360. Internally, both cars are referred to with the same number (131), though the F430 has the Evoluzione tag attached to show that it features some major changes. Internally, the car is simply known as the "Evo".

The body has been redesigned to be more curvaceous and aerodynamic. Although the drag coefficient remains the same, downforce has been greatly enhanced. A great deal of Ferrari heritage is found in the car: at the rear, the Enzo's tail lights have been added, and that car's interior vents have been added to the F430 as well. The car's name has been etched into the outside of the Testarossa-styled driver's side mirror as was previously done with the F40. The large oval openings in the front bumper are reminiscent of Ferrari racing models from the 1960s, specifically the 156 "sharknose" Formula One car and 250 TR61 Le Mans cars of Phil Hill. 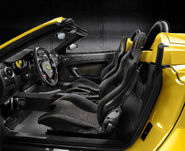 Car and Driver magazine found the car's performance worthy of the Ferrari heritage, and recorded a 4.0 sec acceleration run in the F430. This makes it the third-quickest Ferrari road car ever made, after the Enzo and 599. That being said, the 3.5 second 0-60 run was made on a European spec car, which has launch control, a feature designed to help launch the car from a standing start at high RPM's. Much like the E-Diff and the manettino, the launch control is a technology borrowed from Ferrari's Formula 1 racing program. The launch control is unavailable in U.S.-spec F430's, presumably due to liability issues.

On the BBC Top Gear TV show, shown on the 17 July 2005, the Stig achieved a Power Lap time of 1.22.9. While the laptime was 0.9 seconds less than a Lamborghini Murciélago, the F430 was slower than the Ferrari 360 Challenge Stradale at 1.22.3. The slower lap was blamed on the F430's Bridgestone tyres supposedly having less grip than the F360CS' Pirellis.

While the F430 meets or exceed all NHSTA guidelines, the car reportedly lacks sufficient protection for a small number of female passengers as well as children. The company has requested a waiver on the airbag requirements (which, if not given would mean that cars made after September 1, 2006 could not be legally driven in the United States). The waiver was eventually granted allowing the car to continue to be sold in the US. [1]

The F430 includes the E-Diff, a computer-controlled limited slip differential which can vary the distribution of torque based on inputs such as steering angle and lateral acceleration.

Top Gear's Jeremy Clarkson has commented the F430s handling as being absolutely brilliant, a marked improvement over the 360; He explained that "even the most butter-fingered, incapable driver could drive the F430 around a track only one second slower than the most skilled test driver".

Serving as the successor onto the Challenge Stradale, the 430 Scuderia was unveiled by Michael Schumacher at the 2007 Frankfurt Auto Show. Aimed to compete with cars like the Porsche RS-models and the Lamborghini Gallardo Superleggera, meaning super light weight, it is lighter (by 100 kg/220 lb) and more powerful (at 375.4 kW/503 bhp at 8500 rpm.) than the standard F430. Thus the weight-to-power ratio is reduced from 2.96 kg/hp to 2.5 kg/hp. In addition to the weight saving measures, the Scuderia semi-automatic transmission gains improved 'Superfast', known as 'Superfast2', software for faster 60 millisecond shift-times. A new traction control system combines the F1-Trac traction and stability control with the E-Diff electronic differential. The Ferrari 430 Scuderia does 0-60 miles per hour (97 km/h) in 3.4 s[2], with a top speed of 199 miles per hour (320 km/h).[3]

To commemorate Ferrari's 16th victory in the Formula 1 Constructor's World Championship 2008, Ferrari unveiled the Scuderia Spider 16M at World Finals in Mugello. It is a convertible version of the 430 Scuderia. 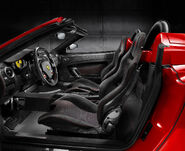 The Ferrari F430 Spider Bio Fuel was presented at the 2008 Detroit Auto Show. It is able to use E85 (an 85% biofuel / 15% gasoline mix). In order for the Ferrari F430 Spider Bio Fuel to use E85 certain modifications had to be made to the fuel feed system and to the engine CPU. Ferrari has brought two models – the 430 Scuderia and the 599 GTB Fiorano - to the 2008 North American International Auto Show in Detroit. Also on the stand this year, however, is a biofuel-powered technological demonstration prototype which uses the F430 Spider as a base.

Retrieved from "https://automobile.fandom.com/wiki/Ferrari_F430?oldid=108311"
Community content is available under CC-BY-SA unless otherwise noted.