The Ferrari F355 is a sports car built by Ferrari from May 1994 to 1999. It is an evolution of the Ferrari 348 and was replaced by the Ferrari 360. It is a mid-engined V8-powered 2-seat coupe. One major difference between the V8 in the 348 and that in the F355, apart from the displacement increase from 3.4 to 3.5 L, is that the F355 features a 5-valve per cylinder head. Like its predecessors and descendants, the F355 is a fairly common car (for a Ferrari) with approx. 11,273 units produced. At launch, two models were available: the coupe Berlinetta, and the targa topped GTS. The Spider (convertible) version was introduced in 1995. In 1998 the Formula One style paddle gear shift transmission was introduced with the Ferrari 355 F1 (note the dropping of the F before the 355) adding £6,000 to the dealer asking price. Ferrari manufactured a race ready F355 Challenge model for use specifically in the Ferrari Challenge race event. The Ferrari F355 Challenge shares the exact same performance and dimension specifications as the original. Ferrari simply added racing seats, a downforce wing, and a roll cage. The F355 Challenge is not street legal. Only 109 were produced. Each F355 Challenge has an emblem on the rear which specifically denotes 'F355 Challenge'. To signify the end of the F355 model Ferrari built 100 units with the designation 'Serie Fiorano' they are slightly lower than stock with a special handling package and remapped fuel chip. The majority of these are Spiders and can easily be identified by the numbered plaque on the dashboard. With 11,273 units produced, it remains one of the most mass produced Ferrari vehicles of all time.

Berlinetta: The Berlinetta was introduced in May, 1994 as the first in a successful series of F355 models. Initially, the 6-speed manual was the only transmission available. However, in 1997, the Berlinetta was the first ever road car to be equipped with the innovative F1-style gearbox management system. Derived directly from Formula 1, where it made its debut in 1989 winning the Brazilian Grand Prix, the electro-hydraulic system was operated by paddles behind the steering wheel using the F355’s conventional 6-speed manual gearbox. The new transmission guaranteed lightning-quick gear changes, with the additional advantage that both the driver’s hands could stay on the wheel at all times.

GTS: In 1995, Ferrari introduced the GTS model to the F355 family. The GTS model is based on the Berlinetta but offers a removable "targa-style" hard top roof, which can be stored behind the seats. Other specifications were identical to the Berlinetta. A total of 2,577 GTS models were produced, with 2,048 delivered with the 6-speed transmission and another 529 with the F1 transmission.

Spider: The F355 Spider debuted in 1995, it's Pininfarina-penned lines honed by 1,800 hours[2] in the wind tunnel, resulting in a blend of elegant style and aerodynamic performance. For the first time on a Ferrari, the semi-automatic soft-top was powered electronically. Initially, the Spider was offered with the 6-speed transmission. In 1997, the Spider was offered with the F1 transmission option. The Spider proved to be the second-most popular F355 model, with a total production of 3,717 units, of which 2,664 were produced with the 6-speed transmission and another 1,053 produced with the F1 transmission.

Ferrari also made a racing model, called the F355 Challenge.

The Serie Fiorano was released in 1999. 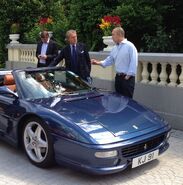 Add a photo to this gallery
Retrieved from "https://automobile.fandom.com/wiki/Ferrari_F355?oldid=108131"
Community content is available under CC-BY-SA unless otherwise noted.