The Ferrari F12 Berlinetta is a grand tourer produced by Ferrari, an Italian sports car manufacturer. It was first introduced to the public at the Geneva Motor Show in 2012.

The engine of the F12berlinetta has been designed to be more efficient than that of the 599, as well as more powerful. The engine management system is fitted with Ferrari's HELE start-stop system to reduce fuel consumption when idling. Ferrari reports that the F12berlinetta can achieve 18 mpg-imp(15.7 L/100 km; 15.0 mpg-US) – a 30% improvement over the 599 – and produces CO2 emissions of 350 g/km.

Similar to the California, 458 Italia, FF and LaFerrari, the F12berlinetta transmits power through a 7-speed dual-clutch automated semi-automatic gearbox operated by the driver using paddle shifters behind the steering wheel. Compared to similar models, the F12berlinetta uses shortened gear ratios to match the power of the engine. 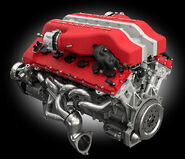 The Ferrari F60 America is a limited production roadster derivative of the F12, built to celebrate 60 years of Ferrari in North America. Production was limited to ten examples and according to the manufacturer, all were already spoken for at the time of the car's public introduction in October 2014. The open-top configuration pays homage to US-only limited production convertible Ferraris of the past, such as the 275 GTS/4 NART Spider. Compared to the F12, the F60 has all-new bodywork; it uses a light removable soft top instead of a conventional convertible top. Each of the ten examples built features an asymmetrical cabin design with red trim for the driver's area and black for the passenger, American flag detailing in the center of the backrests of both seats, and classic blue and white North American Racing Team livery.

Retrieved from "https://automobile.fandom.com/wiki/Ferrari_F12_Berlinetta?oldid=111743"
Community content is available under CC-BY-SA unless otherwise noted.