The Ferrari Enzo (originally Enzo Ferrari) is a 12-cylinder Ferrari supercar named after the company's founder, Enzo Ferrari. It was built in the year 2003 using Formula One technology, such as a carbon-fiber body, F1-style sequential shift transmission, and carbon-ceramic brake discs. Also used are technologies not allowed in F1 such as active aerodynamics. After a downforce of 775 kg (1709 lb) is reached at 186mph the rear wing is actuated by computer to maintain that downforce.

The Enzo's V12 engine is the first of a new generation for Ferrari. It is based on the architecture of the V8 found in sister-company Maserati's Quattroporte, using the same basic architecture and 104 mm bore spacing. This design will replace the former architectures seen in V12 and V8 engines used in most other contemporary Ferraris. The 2005 F430 is the second Ferrari to get a version of this new powerplant.

In 2004, Sports Car International named the Enzo Ferrari number three on their list of Top Sports Cars of the 2000s.

Every four years Ferrari plans on coming out with a new version of the Enzo (not necessarily being called the Enzo). The new model of the Enzo comes equipped with a carbon fiber front bumper, and instead of having mirrors it has cameras(the views are displayed on a navigation system in the center console.

Motor Trend Classic named the Enzo as number four in their list of the ten "Greatest Ferraris of all time".

The Enzo was initially announced at the 2002 Paris Motor Show with a limited production run of 349 units and priced at US$643,330. The company sent invitations to existing customers, specifically, those who had previously bought the Ferrari F40 and Ferrari F50. All 349 cars were sold in this way before production began. Later, after numerous requests, Ferrari decided to build 50 more Enzos, bringing the total to 399.

On November 8, 2005, Ferrari announced that it would build one additional Enzo, bringing the total to 400. The car, chassis #ZFFCZ56B000141920, was auctioned by Sotheby's Maranello Auction on June 28, 2005 to benefit survivors of the 2004 Tsunami for €950,000 (US$1,274,229), almost twice its list price. This sum was presented to Pope Benedict XVI, while Formula One driver Michael Schumacher gave the Pope a steering wheel to commemorate the donation. This wheel included a plaque which read, "The Formula 1 World Champion's steering wheel to His Holiness Benedict XVI, Christianity's driver."

The transmission is a 6-speed automated manual with paddles controlling an automated shifting and clutch mechanism, with LED lights on the steering wheel telling the driver when to change gears with a shift time of just 150 ms[1] . The Enzo uses 483 mm (19 in) wheels and has 381 mm (15 in) Brembo disc brakes.

There are two avalable colors:

It is now the most expensive Ferrari today.With its high performance,combined with its exclusive amount of units made,the Enzo is listed one of the most expensive cars in the world.It is also a Ferrari with the highest top speed,which can travel up to 225 mph.The name itself was named after the founder of Ferrari company,Enzo Ferrari instead of using the name F60.It is very rare in the automotive history for a car named after the founder of the company.It is one of the first Ferrari road cars that use paddleshift gearbox.It is probably the first Ferrari with papercut scissor door (Also called Lambo door).

Notable owners of the (or famous people seen driving an) Enzo include:

As the result of the Enzo, Ferrari have decided to use some of the technology developed for it in a small-scale program to get more feedback from certain customers for use in future car design as well as their racing program. The core of this program is a car called the Ferrari FXX. It is loosely based on the Enzo's design with a highly-tuned 6.2 litre version of the Enzo's engine putting out roughly 588 kW (789 hp/800 PS). The gearbox is new as well as the tires (custom-designed for this car by Bridgestone) and the brakes (developed by Brembo). In addition, the car is fitted with extensive data-recording and telemetry systems to allow Ferrari to record the car's behavior. This information will be used by Ferrari to develop their next supercar.

Like the Enzo, the car will be sold to specially selected existing clients of Ferrari only; the initial price is €1.3 million. Unlike the Enzo, the clients will not take delivery of the car themselves. Rather, it will be maintained by Ferrari and available for the client's use on various circuits as arranged by Ferrari and also during private track sessions. The car is not expected to be street-legal or suitable for road use.

Pininfarina had wanted to do a special one-off Enzo Ferrari based hyper-car and was looking for a backer. After sending out feelers to its clients, American Ferrari collector, James Glickenhaus eventually agreed to back the project by commissioning the car as a modern homage to great Ferrari sports racing cars such as the 330 P3/4, 512 S, 312 P, and 333 SP on the last unregistered US-spec Enzo chassis.[5] "The Glickenhaus Car" will officially be called Ferrari P4/5 by Pininfarina[6] and retains the Enzo's drivetrain and VIN.[7] The car was unveiled at the 2006 Pebble Beach Concours d'Elegance and appeared in the September issue of Car and Driver. The "photos" previously shown in AutoWeek and Octane magazines were not close to what the car looks like. After its unveiling at Pebble Beach, the P4/5 will return to Europe for high speed testing, press days, and an appearance at the Paris Auto Show in September.

The Maserati MC12 is a mid-engined supercar derivative of the Enzo developed by Maserati while under control of Ferrari. It was developed specifically to be homologated for racing in the FIA GT Championship, with a minimum requirement of 25 road versions to be produced before the car could be allowed to compete. Maserati built 50 units, all of which were presold to selected customers. A further variation, the MC12 Corsa is a track day car, similar to the Ferrari FXX.

The Maserati MC12 has the same engine, chassis and gearbox as the Enzo but the only externally visible component from the Enzo is the windshield.[8][9] The MC12 is slower accelerating (0-100 km/h in 3.8 s) and has a slower top speed (330 km/h) than the Enzo due to engine tuning.[10]

The Maserati Birdcage 75th was a concept car that was based on the MC12 and created by automobile manufacturer Maserati and designed by Pininfarina. It was first introduced at the 2005 Geneva Auto Show and was named to honor the classic Maserati Birdcages of the past and to also honor Pininfarina's 75th anniversary.

In 2005, Ferrari conducted races with several other famous track and roadcars, to match and compare the Enzo's performance and overall handling and lap times on track. The races took place on the Autodromo Nazionale Monza racing circuit, where to date, the Scuderia Ferrari 2004 F1 model holds the lap time record, of 1:21.046, by Rubens Barrichello.

A total of 20 cars were raced along with the Enzo, driven by Fernando Alonso Díaz. The Enzo timed at best, 1:50.021, by 10 laps on the track overall. Ferrari claimed the races unofficial but released the lap times and overall scoring to the public in 2007. Other races afterwards were conducted too, but the results haven't been published by Ferrari yet.

BMW, Mercedes-Benz, Ford, Lamborghini, Chevrolet, Dodge, Porsche and Bugatti were invited for the friendly comparison races and all accepted the invitations, in 2003. In 2004 the drivers were chosen by each company. Full list of the drivers invited were never published by Ferrari.

The results were as followed.

Victories for the Enzo

Losses for the Enzo 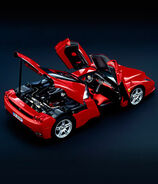