The Ferrari California is a grand touring sports car that was launched by Ferrari at the 2008 Paris Motor Show. It is a two door 2+2 hard top convertible. The California is powered by front-mid mounted 4.3 L (260 cu in) V8 sending a reported 460 PS (450 bhp) to the rear wheels.[1] The car revives the "California" name. It also has a similar design to the Ferrari 599 GTB Fiorano. 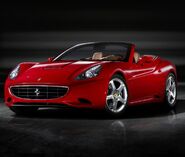 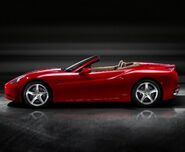 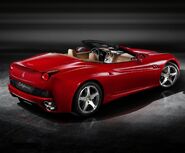 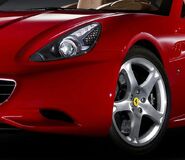 Add a photo to this gallery
California T

The California was launched at the 2008 Paris Motor Show. According to industry rumours, the California originally started as a concept for a new Maserati, but the resulting expense to produce the car led the Fiat Group to badge it as a Ferrari in order to justify the high cost of purchase; the company denies this, however. The California represents a new, fourth model range for the company.

The California represents a number of firsts for Ferrari:

Bosch produced the direct injection system. The engine displaces 4,297 cubic centimetres (262.2 cubic inches), and used gasoline direct injection. It delivers 338 kW (453 bhp) at 7,750 rpm; its maximum torque produced is 485 N·m (358 lbf·ft) at 5,000 rpm. The resulting 79 kW (106 bhp) per litre of engine displacement is one of the highest for a naturally aspirated engine, as other manufacturers have used supercharging or turbocharging to reach similar power levels. The body computer system was developed by Magneti MarelliAutomotive Lighting.

Ferrari spent over 1,000 hours in the wind tunnel with a one-third-scale model of the California perfecting its aerodynamics. With the top up, the California has a drag coefficient of Cd=0.32, making it the most aerodynamic Ferrari ever made until the introduction of the Ferrari F12berlinetta.

The California is built in a new production line adjacent to the existing factory at Maranello. The existing production line produces 27 cars per day, or 6,000 per year. Throughout California's production, only 3 cars had been built with manual transmission,mincluding one order from the UK.

On 15 February 2012, Ferrari announced an upgrade of the 2009 model which is lighter and more powerful. Changes include reducing body weight by 30 kg (66 lb), increased power by output of 30 PS (22 kW; 30 hp) and 15 N·m (11 lbf·ft), acceleration from 0–100 km/h (62 mph) time reduced to 3.8 seconds, introduction of Handling Speciale package and elimination of manual transmission following poor sales. The car was released at the 2012 Geneva Motor Show as a 2012 model in Europe and as a 2013 model year for the US. Deliveries began in Europe first.

To give the clients a more dynamic driving experience, an optional HS (Handling Speciale) package was developed as part of the update in 2012 (for the US 2013 model year). It can be recognized by a silver coloured grille and ventilation blisters behind the front wheel wells. The HS package includes Delphi MagneRide magnetorheological dampers controlled by an ECU with 50% faster response time running patented Ferrari software, stiffer springs for more precise body control and a steering rack with a 9 per cent quicker steering ratio (2.3 turns lock to lock as opposed to the standard rack's 2.5).

In May 2012, Ferrari recalled the California because the engine could freeze suddenly and possibly cause a crash. The F136 engines had crankshafts that were machined incorrectly. The auto maker learned of the problem when it happened during a review by car critics. Owners could choose from having a new engine installed by their dealer, having the engine removed and the work done by Ferrari North America or having a new crankshaft and bearings installed at the dealership.

The Ferrari California T is an update of the earlier California featuring new sheetmetal, new interior, a revised chassis and a new turbocharged powertrain, debuting in 2014 for the 2015 model year.

First unveiled on the web on February 12, 2014, subsequently the car debuted at the Geneva Motor Show (March 6–16, 2014). The T in the moniker stands for Turbo, a technology Ferrari last used on a roadcar on the F40. The car utilizes a new 3.9 liter bi-turbo V8 that produces 412 kW; 560 PS (552 bhp) at 7,500 rpm and 755 N·m (557 lb·ft) torque at 4,750 rpm as well as a 7-speed dual clutch gearbox with different gear ratios, a revised magnaride' adaptive suspension, as well as a new F1 Trac system. The car can accelerate from 0–100 km/h (0–62 mph) in 3.6 seconds and reach a top speed of 315 km/h (196 mph). The car also features a new front fascia that was influenced by the F12, a revised rear and a revised interior. Another improvement to the car is the reduction of emission pollution by 15% compared to its naturally aspirated predecessor. The car also utilizes small turbos and a variable boost management system to reduce turbo lag. It is also the first car in which Ferrari has introduced the new Apple CarPlay functionality into its built-in infotainment system – Apple confirmed at the launch of the Geneva Motor Show that Ferrari, Mercedes-Benz and Volvo would be among the first car manufacturers to bring CarPlay compatible models to market. For 2018 the California gets replaced by the Ferrari Portofino.

Retrieved from "https://automobile.fandom.com/wiki/Ferrari_California?oldid=108326"
Community content is available under CC-BY-SA unless otherwise noted.