The 612 is Ferrari's second all-aluminium vehicle, the first being the 360 Modena. Its space frame (developed with Alcoa) is made from extrusions and castings of the material, and the aluminium body is welded on. The chassis of the 612 will form the basis of the new 599 GTB, the replacement for the current V12 575M sports car.

It is produced at Ferrari's Carrozzeria Scaglietti plant, the former home of the car's namesake coachbuilder in Modena, Italy. The design, especially the large side scallops, pays homage to a unique early 1960s Ferrari car built to film director Roberto Rossellini's personal taste for his wife, actress Ingrid Bergman.

The 612 Scaglietti shares its engine with the Ferrari 575 Superamerica. The engine has compression ratio of 11:1.

The 612 comes with 6-speed manual or the 6-speed F1A semi-automaticpaddle shift system, a much refined version of the F1 system in the 360.

RECALL ALERT: On June 3, 2008, Ferrari issued a recall affecting 366 Ferrari 612 Scagliettis produced between 2005-2007 and equipped with the paddle-actuated F1 transmission. According to Ferrari's Official release,

"A NONCONFORMING CLUTCH SENSOR IN THE TRANSMISSION COULD MALFUNCTION UNDER NORMAL OPERATING CONDITIONS DUE TO THE HEAT PRODUCED BY THE VEHICLE. SUCH SENSOR MALFUNCTION MAY INHIBIT THE PROPER FUNCTION OF THE CLUTCH ASSEMBLY MAKING THE SHIFTING OF THE GEARS VERY DIFFICULT. THE VEHICLE SYSTEM IMMEDIATELY DETECTS THE CLUTCH SENSOR FAILURE AND CAUSES THE WARNING LIGHT TO ILLUMINATE."

The malfunction may render the vehicle inoperable and, possibly, result in a crash. Ferrari promises to replace the clutch sensor as well as the cable holder and magnet which are related to the error. Dealers have been instructed to contact owners and owners, themselves, may contact Ferrari directly at 1-201-816-2600. [1]

The front of the vehicle is reminiscent of the Ferrari 599 GTB.

The 612 Kappa is a one-off built for Peter S. Kalikow. The 612 Kappa has an all-aluminum body-shell, and it stands out from the 612 production counterparts in using the rear taillights found on the Enzo and F430, chromed headlight bezels, and a sunroof that uses electrochromic glass to vary the amount of opacity in the glass.

In August 2006, a one-off 612 Scaglietti was cutomized by design and lifestyle magazine Wallpaper*. The bespoke car is part of Ferrari’s Carrozzeria Scaglietti Personalization Program, which allows customers the opportunity to totally revamp the interior. Recently, the car took delivery to its new owner, Paul Hill.

Mechanically, the car picks up the 612 Scaglietti F1 designation and is equipped with the HGTC handling pack.

The Ferrari GG50 is a one-off fully-working concept car designed and built by legendary car designer Giorgetto Giugiaro to celebrate his 50th anniversary in the business - the longest of any living automotive designer. 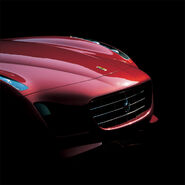