The Ferrari 599 GTB Fiorano (internal code F139) was Ferrari's 2-seat Gran Turismo flagship model, replacing the 575M Maranello in 2006 as a 2007 model. The 599 GTB debuted at the Geneva Motor Show on February 28, 2006. Styling of the 599 GTB was handled by Pininfarina, under the direction of Ferrari stylist, Frank Stephenson. It is named for its engine displacement and the Fiorano test track used by Ferrari.

The styling of the Fiorano bears some resemblance to its sister car, the 612 Scaglietti, yet at the same time carries a sportier, more aggressive stance. The differences are mostly in the squared off body detailing, the lack of the scalloped side detail of the 612 and more obvious aerodynamic ducting, particularly on the hood, in the front wings over the front wheels and the flying buttress C pillars. Designers at Pininfarina reprotedly looked to the Daytona when designing the 599 [1]

The flying buttress C pillars are the most distinctive feature of the Fiorano and are designed to redirect airflow over the small lip spoiler on the rear decklid. These in conjunction with the shaped undertray allow the Fiorano to exhibit a degree of stability at very high speeds that was lacking in its predecessor, by contributing downforce and aerodynamic efficiency without the need for ungainly wings and spoilers. 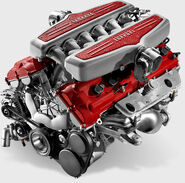 It shares much of its chassis with the 612 Scaglietti 2+2, though with a shorter 110 in (2750 mm) wheelbase, new bodywork sculpted by Pininfarina. Like the 612 Scaglietti, the Fiorano's front midship with rear transaxle arrangement gives the 599 an ideal weight distribution of 47/53 front/rear. The curb weight is expected to be about 3700 pounds, which will put the aluminum 599 GTB at roughly 300 fewer pounds than the 508-hp 575M Maranello.

A traditional 6-speed manual transmission as well as Ferrari's 6-speed sequential manual gearbox called F1 SuperFast will be offered. The e-diff active differential from the F430 will not be used. However, the manettino concept first seen in the F430 will also appear in this car. Ferrari will reportedly source the MagneRide active suspension system from Delphi Corporation. Reviewers of the car have mentioned that the MagneRide suspension gives the 599 a very comfortable ride but allows it to handle well at the same time.

Pricing for the 599 GTB is expected to start at US$250,000 and it won't go on sale until the end of summer 2007. A convertible Spyder version is expected for 2008, followed by a track-ready GTC. Another Superamerica version is also expected.

The Ferrari 599 GTB Fiorano will be the first Ferrari ever to appear in the Gran Turismo series of videogames, in the upcoming PlayStation 3 title Gran Turismo HD, as well as the first European car to be featured as the cover car in a Gran Turismo game.

The first publicly recorded crash of a 599 GTB occured when Car and Driver writer Aaron Robinson crashed one into the retaining wall of the Passo della Cisa in Italy, a few meters from a monument to Enzo Ferrari (for his finishing fourth in a 1919 hill climb on that same road). The car suffered only minor damage to the front right fender and Robinson and photographer Mike Valente were able to drive it back to the factory.

To market the 599 GTB in the Americas, Ferrari embarked on a 20,000 mile trek from Brazil to New York in two cars. The two cars drove through 16 countries and had minimal (mainly suspension) changes made to the mechanicals. Apart from being an excellent way to generate publicity, the trip signifies the leaps and bounds Ferrari and its sister company, Maserati, has come in terms of reliablity of its vechicles. [5]

An upgrade that improves the car's handling the package, also called HGTE or Handling Gran Turismo Evoluzione, includes a modified set-up with stiffer springs and rear anti-roll bar as well as new calibration settings for the magneto-rheological shock absorbers when the manettino is at its sportier settings. The ride height has also been lowered, which lowers the car's centre of gravity. The package also includes optimised tyres featuring a compound that offers improved grip. The car's electronics have also changed. The gearbox's shifts are faster in high-performance settings, while new engine software improved accelerator response.

The exhaust silencer was modified to produce more marked and thrilling sound under hard usage whilst still delivering just the right comfort levels at cruising speed.

The exterior and interior were upgraded with more carbon fibre components.

The car was unveiled at the 2009 Geneva Auto Show.Ferrari announced at the 2010 Beijing International Auto Show that the 599XX had completed the Nordschleife circuit at the Nürburgring in a time of 6 minutes and 58.16 seconds - the second fastest time ever recorded for a production-derived sports car.

Ferrari has given only two other models the GTO designation: the 1962 250 GTO and the 1984 288 GTO. Unlike the previous GTO's however, the 599 GTO was not designed for homologation in any racing series. However, like the previous GTO models, it was based on a circuit car,the 599XX. The 599 GTO is the successor of Ferrari Enzo, placing its position as the flagship of the line up. It is also the first front engined Ferrari flagship since the 250 GTO.

" In the middle, is a quartic steering wheel. Quartic, as in square, as in Austin Allegro. Worse still, it's half carbon fibre, half leather, and it's got Formula One-style buttons; a series of red lights to tell you when to change gear. But they are so bright you think your caught in the fearsome glare of a Martian spaceship. So you don't change gear. You crash." Jeremy Clarkson, Top Gear

Retrieved from "https://automobile.fandom.com/wiki/Ferrari_599_GTB_Fiorano?oldid=111082"
Community content is available under CC-BY-SA unless otherwise noted.