There are two known styles of this car. The first is a Street Legal Edition of the car. There is also a Racing Edition version for Pro Sports Car Drivers

The standard transmission is a Getrag dual-clutch 7-speed transmission, similar to the Ferrari California. There is no traditional manual option, making this the second road-car after the Enzo not to be offered with Ferrari's classic gated manual.

The car's suspension will feature double wishbones at the front and a multi-link set-up at the rear, coupled with E-Diff and F1-Trac traction control systems, designed to improve the car's cornering and longitudinal acceleration by 32% compared to its predecessors.

The brakes include a prefill function whereby the pistons in the calipers move the pads into contact with the discs on lift off to minimise delay in the brakes being applied. This combined with the ABS has reduced 100–0 km/h (62-0 mph) braking distance to 32.5 metres (107 ft).[4]

The adaptive magnetorheological dampers were co-developed with Delphi.

The 458 Speciale is the top performing 458 Italia. Distinctions of the Speciale are the new forged wheels, vented bonnet, finned side sills, taller rear spoiler and redesigned bumpers, which include active aerodynamics designed by Ferrari Styling Centre in cooperation with Pininfarina; front and rear movable flaps balance downforce and cut drag at speed. The engine was revised, with power increased to 445 kW (597 hp) at 9,000 rpm, 540 N·m (398 lb·ft) of torque at 6,000 rpm. Electronic systems were updated too, introducing side slip angle control (SSC) to improve car control on the limit. SSC performs instant-to-instant analysis of the car’s side slip, comparing it with the target value and then optimising both torque management (via integration with F1-Trac traction control) and torque distribution between the two wheels (via integration with the E-Diff electronic differential). The weight/power ratio (1,290 kg dry, 1,395 kg at the kerb, 90 less than the standard 458) is equal to 2.13 kg/cv, sprints from 0 to 62 mph (100 km/h) in just three seconds (0–125 mph or 0–200 km/h in 9.1 seconds with a response time of just 0.060 seconds). Ferrari declared a Fiorano test track lap time of 1:23.5, only 0.5 seconds slower than the F12berlinetta. Lateral acceleration now reaches 1.33 g.

The vehicle was unveiled in 2013 at the Frankfurt Motor Show.

RECALL ALERT: Ferrari has issued a recall affecting all 1,148,458 Italias built since launch up to July 30, 2010 over a fire risk caused by an adhesive used to attach a heat shield under the rear fender which can ignite under high temperatures, leading to a larger fire in the engine bay. This problem has already immolated 5 such 458s (out of 11 incidents) and has prompted Ferrari to design a new heat shield that attaches with rivets, negating the need for the adhesive. 458 owners are urged to call a dealer to schedule an appointment for the free fix as soon as possible. [6][7] 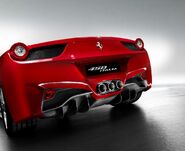 Ferrari 458 Italia as seen in the film Transformers: Dark of the Moon

The body was designed by Pininfarina, as with all recent Ferrari models. The car’s exterior styling and features were designed for aerodynamic efficiency, producing a downforce of 140 kg at 124 miles per hour (200 km/h). In particular, the front grille features deformable winglets that lower at high speeds, in order to offer reduced drag.[6] The car's interior was designed using input from former Ferrari Formula 1 driver Michael Schumacher, including a new steering wheel design which incorporates many features and controls as opposed to them being on the dashboard, similar to racing car designs.

According to British car magazine AutoCar, the 458 Italia's design has drawn inspiration from the Enzo Ferrari and its Mille Chili concept car.[7] It has been designed to be Ferrari's sportiest V8-engined car, to distinguish itself from the recently launched Ferrari California.[7]

On the 6th episode of the 15th season of Top Gear, Jeremy Clarkson opined that the "[458 is] better than an F40. I never thought I'd say that" and that it is "one of the all-time greats". 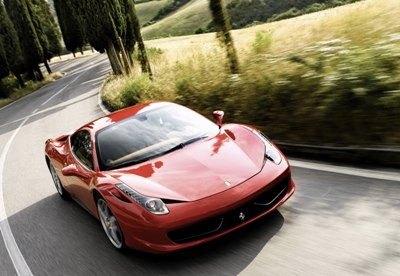 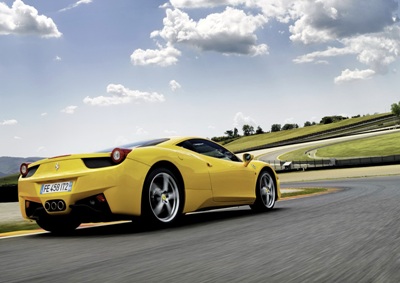 Retrieved from "https://automobile.fandom.com/wiki/Ferrari_458_Italia?oldid=109392"
Community content is available under CC-BY-SA unless otherwise noted.