The Ram is a fullsize pickup truck from Chrysler's Dodge brand. The name was first used in 1981 on the redesigned D Series, though it came from the hood ornament used in the 1930s and 1940s trucks.

The Ram was Motor Trend magazine's Truck of the Year for 1994, and the Ram Heavy Duty won that award for 2003.

There are an overwhelming number of decisions to make when purchasing a Dodge Ram. Dodge has seemingly left no possibile combination of features unexplored, so if you're considering one of these, plan on spending some quality time with the brochure.

The Dodge Ram 1500 comes in three different body styles: the Regular Cab, Quad Cab, and new Mega Cab. The difference between the body styles has mostly to do with cabin space and truckbed length. The Regular Cab has only a front bench seat, the Quad Cab has a back seat with independent doors, and the Mega Cab boasts the largest back seat of any pickup.

Today's actual prices for the Dodge Ram 1500 can be found at CarsDirect.

The major recent model available for reliability ratings, the 2003 version, was given a Green rating in all major categories by Automotive Information Systems. A Green rating signifies "Minimal Problems," and the categories inspected include Engine, Transmission, and Accessories, among others.

In safety tests performed by the NHTSA, the Ram 1500 performed extremely well. Front-Impact tests for both the driver and passenger sides yielded 5-star ratings, while tests for rollover earned the Ram 4-star ratings for both its 2WD and 4WD models.

Some of the standard safety features are:

In addition, overhead curtain airbags are available on all trims, and the availability of items such as a security system and ignition disable are standard for most trims and only optional for the rest.

Colors will vary according to trim, and a full list can be viewed at CarsDirect.com. Here are some of the available colors:

Dodge announced a mild hybrid version of the Ram, dubbed the Contractor's Special, in 2003. However, the schedule for delivery slipped as Dodge backed away from the vehicle. The press currently reports that the hybrid Ram will be available only for fleet purchasers and will not enter mass production. It offered an AC electrical outlet panel for running an entire jobsite worth of power tools.

Also A Dodge Ram Hybrid with the Two Mode Hemi Hybrid (co developed with GM, BMW, and Mercedes)will be released in 2010 along with Dodge Durango, and Chrysler Aspen models currently available.

Autos.com has the Ram 1500 tied for 2nd in its Resale category for Full-Size Trucks. This ranking is a bit misleading, however, as the Ram 1500 shares this honor with 9 other trucks, while 1st place itself is shared by 6 trucks. As reported by Kelley Blue Book, "the Dodge Ram 1500 holds its value just slightly better than average, with HEMI-powered short-bed models at the top of the projected residual values list. The Ram is expected to hold its value better than the Chevrolet Silverado by a few percentage points, but not as well as the Nissan Titan."

Chrysler attempted to keep the Ram competitive in the market through various developments for the 2009 model, including a new four-door cab style offering, new suspension, a new hemi engine option, and the Rambox, a new storage system that allows secure storage in the trucks bed walls. Later models have the Rambox system tied in with the remote keyless system.

The Mega Cab option was deleted on the 1500 model, replaced by a true four-door crew cab. Other cab options are regular cab and Quad Cab. The Mega Cab option remains on the heavy-duty models, along with crew cab. Improvements made from the previous generation mean the rear seats are now able to recline. 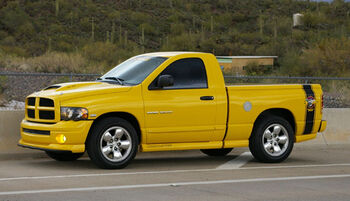 The third-generation Ram 1500 debuted for 2002 (the 2500 and 3500 versions would carry on for one more year with the previous bodystyle). This represented a major update including all new frame, suspension, power teams, interiors, and sheetmetal. It included an even larger grille, and special models kept interest up as most competitors had adopted the Ram's separate-fender look. The Cummins ISB Diesel was on the Ward's 10 Best Engines list for 2004. The four wheel drive light duty trucks (1500 series) lost their live axles in trade for an independent front suspension, but the heavy duty (2500 and 3500 series) retained the live axles for maximum durability and load capacity. 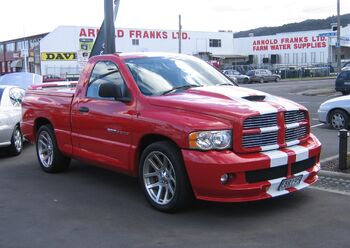 A natural gas version of the 5.2 L engine debuted for 1995, as well as an extended-cab version. In 1998, Dodge introduced the "Quad-Cab", which used rear-hinged pillarless doors in the back for a wide cab opening on its extended-cab. The Cummins ISB engine, introduced in 1999, was an unusual multi-valve pushrod engine.

The first-generation Ram trucks, introduced for 1981, kept the previous generation's model designations: "D" meant rear wheel drive while the "W" Power Ram meant four wheel drive. Like other domestic makers, Dodge used 150 to mean a half-ton truck, 250 to indicate a ¾-ton, and 350 for one-tons. Standard cab, "Club" extended cab, and crew cab versions were offered along with 6.5 ft and 8 ft bed lengths and "Utiline" and "Sweptline" styled boxes. Externally, the first-generation Rams were facelifted versions of the previous generation Dodge D Series pickups (known as the Adventurer) dating back to 1972 with wraparound taillights and square headlights.

100 models were added for 1984, replacing the previous "Miser" trim on low-output manual transmission Slant-6 trucks. A "Ram-Trac" shift-on-the-fly transfer case was added for 1985, and both the crew cab and Utiline flared bed were dropped for 1986. Also for 1986, a new crosshair grille appeared. The 5.2 L engine received electronic fuel injection for 1988.

The D Series trucks sold poorly compared to the Ford F-Series and the General Motors C/K trucks, with just under 100,000 units sold most years of their production.

A Cummins turbodiesel option was added for big (400 ft.lbf / 542 Nm) torque needs. This engine, part of the Cummins B Series, is the largest straight-6 engine ever produced for a passenger vehicle. These early B Series engines have been known to go 350,000 miles before their first overhaul.

The predecessor to the Ram.

Retrieved from "https://automobile.fandom.com/wiki/Dodge_Ram_1500?oldid=113012"
Community content is available under CC-BY-SA unless otherwise noted.