The Dodge (and Plymouth) Neon effectively replaced 2 cars in the Dodge and Plymouth lineup: the Dodge Shadow and Plymouth Sundance, and the Mitsubishi-produced Plymouth and Dodge Colt when they were introduced in 1995. Naturally, the Dodge and Plymouth Neons were identical. The only difference in the first models was a tiny "Dodge" or "Plymouth" written in the circle around the penstar logo. '96 models adopted the Ram's head logo, and later, Plymouths got the divisions new clipper ship logo. The 1st generation Neon attempted to appeal to one's "friendly" nature, even going so far as to imply the car was smiling and saying "Hi" in its advertising. The next-generation Neon, however, would change that with the ferocious SRT-4 model in 2003 - a Neon that many owners would call anything but "friendly and nice". The Neon would be discontinued after 2005, to be replaced by the Caliber in 2007.

Here's a rundown on both generations:

The 1st gen Neon was introduced in January 1994 as an early 1995 model. At first only a 4-door sedan was available, but a 2-door would soon follow later on in the model year. Sedans were available in base, Highline and Sport trims, whereas the coupe was offered only in Highline and Sport. Standard engine in the Base and Highline was a 132 hp 2.0L I4, but a 150 hp DOHC version of the 2.0 was standard on the Sports (and later optional on the Highlines). Either engine could have a 5-speed manual or a 3-speed automatic. Sport coupes would have a domed hood, rear spoiler and unique rims. Power windows were optional... but only on the front doors on the sedans - the back doors made do with manual crank windows. In 1996, all Neons got 14" rims, a base coupe was added, and all models now got body-colored bumpers. These early Neons, in Highline trim, were famous for their "Bubble Caps", plastic hubcaps with 5 bubble shapes stamped into them. A Competition package was available on the coupe, largely to appeal to the autocross crowd, and would have the 150 hp 2.0 engine among other go-fast equipment. Not many changes in 1997 other than usual new added colors, but an R/T package became available in 1998 (using the "R/T" badge on a front-drive Neon certainly didn't sit well with some Mopar fans, who thought the use of such a hallowed badge on such a car was at the very least blasphemous). The R/T model had special graphics and, naturally, the 150 hp 2.0 engine, and was available on either the coupe or sedan. In other Neon news, Base models were dropped - the Highline was now the entry-level Neon. There wasn't much news in 1999, other than a new Sport package becoming available on the sedan. The Highline and R/T models continued. An all-new generation would be introduced in 2000.

The 2nd gen Neons started in mid-1999 as early 2000 models. There would be a Dodge and Plymouth version, and again, they were identical save for a slightly different grille on the Plymouth. Even though the design was all new, the Neon's exterior appearance didn't change much from the 1995-1999 version, but wheelbase and overall dimensions (and curb weight) did grow slightly. The sole engine was now the 132 hp version of the 2.0 I4 - the 150 horse version and R/T package were both dropped (temporarily) - base and ES models were now offered. The coupe model would be no more either in this generation. Transmission choices were still a 5-speed manual or a 3-speed automatic, and the power window option still had the oddball setup of power front windows/manual crank rear windows. The R/T package was back in 2001 after a year hiatus, and an ACR (American Club Racer) version also became available - the Neon had become a popular choice with autocrossers and Dodge wanted to specifically appeal to them. Both were available with the 150 horse 2.0, which also returned this year, but this time it was available only with a 5-speed manual, which was fine for most buyers. Base models were dropped, the SE was now the "base" model, while the ES remained the upper-level model. ABS was standard on the R/T and ACR and optional on the ES. Side impact airbags were now standard on all models. Not much changed on the 2002 models, other than a 4-speed automatic (finally) replacing the old 3-speed unit, but available again only on the ES. The Plymouth Neon was now officially dead after 2001, along with Plymouth itself.

Life went on for the Dodge Neon, however, as it soldiered on into 2002 with very minimal change other than a couple of new colors. Things really started to get interesting for the Neon in 2003 - the ACR version was discontinued, but an all-new SRT-4 version was now the top-of-the-line Neon, which got, among other things, unique body trim, a hood scoop, 160 MPH speedo, and a raised "basket-handle" rear spoiler (somewhat reminiscent of the 1969 Dodge Charger Daytona spoiler). But, best of all, was the 215 hp turbo 2.4L I4 engine - along with a specially sport-tuned suspension and ABS brakes to handle the added power. The 5-speed manual was the sole transmission on the SRT-4 (see separate SRT-4 page for more detailed info on that model). All other Neons carried on with revised nose with new headlights that incorporated the turn signals (which, to some, made the Neon look cross-eyed), a larger crosshair grille and tail treatments with new taillights. A new mid-grade SXT model was added, which slotted in between the ES and R/T. The 150 horse 2.0 was dropped (again), and the sole engine (except the SRT-4) was now the 132 hp 2.0 I4 (again). A new 3-spoke steering wheel design debuted, replacing the previous 4-spoke "upside down" wheel design. In 2004, the SRT-4 got a 15 hp boost to 230, and this time around it got a sorely needed standard limited-slip differential. Neon ES, SXT and R/Ts continued as before. 2005 Neons didn't get many changes either, other than some more interior and exterior visual enhancements for the SRT-4, which unsurprisingly became a darling of the "sport-tuner" crowd due to its bang-for-the-buck content, and will no doubt continue its strong cult-following for many years to come.

The Neon was discontinued after 2005, and succeeded by the all-new 2007 Caliber. 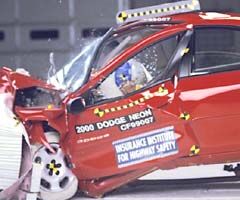 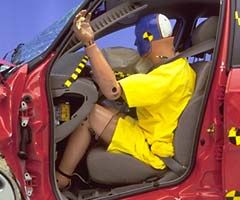 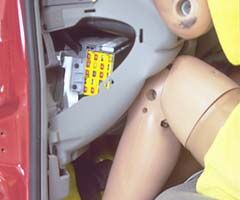 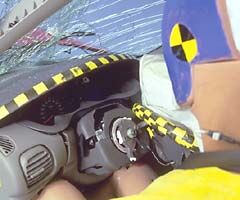 Outside North America, the Neon was sold as a Chrysler Neon in Japan, Europe and Australia. In Australia, sales were slow and by the second generation, it was taken off and replaced with a Chrysler PT Cruiser.

Retrieved from "https://automobile.fandom.com/wiki/Dodge_Neon?oldid=83639"
Community content is available under CC-BY-SA unless otherwise noted.