The Dodge Durango is a mid-sized SUV from DaimlerChrysler's Dodge brand. It debuted in the 1998 model year and was redesigned for 2004. It fills the gap in the Dodge lineup since the cancellation of the Dodge Ramcharger in 1993. The Durango is produced at the Newark Assembly plant in Newark, Delaware. 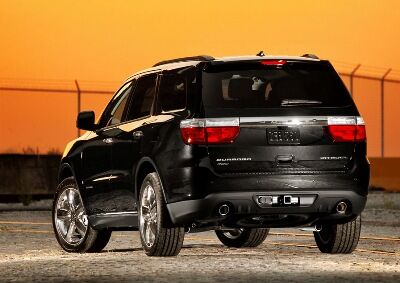 Chrysler will begin production of a hybrid version of the Dodge Durango at its Newark Delaware Assembly plant in 2008. The hybrid system for these vehicles is being developed jointly by a GM, BMW, and DaimlerChrysler partnership

The same system will also be available on GM's Chevrolet Tahoe Hybrid and GMC Yukon Hybrid SUV models. Production of the Durango is scheduled to begin shortly after the General Motors launch of those SUVs in late 2007.

The collaboration between these companies has yielded a patented two mode full hybrid system which maximizes efficiency for city and highway driving. In the first mode, at low speeds, the vehicle can operate in one of 3 ways: electric only, engine power only or in any combination of engine and electric power. The second mode combines electronic controls, such as Active Fuel Management (Cylinder deactivation), cam phasing, and late-intake valve closure, allowing even more efficient engine operation. The hybrid-electric drive system is based on the technology in GM's hybrid transit buses. The result is said to be a 25 percent improvement in composite fuel efficiency.

Because the architecture can be scaled to fit multiple vehicles and adapted to gasoline or diesel engines, the two-mode full hybrid can be applied globally.

A facelift for the Dodge Durango also looks to be on the agenda when released as a hybrid, although it is suspected that changes will be minor.

It gets an estimated 20/22 city/highway miles per gallon 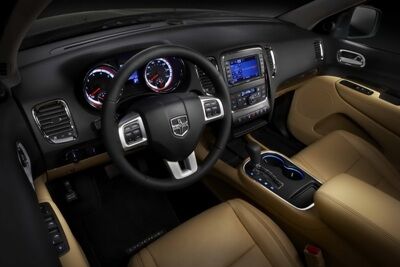 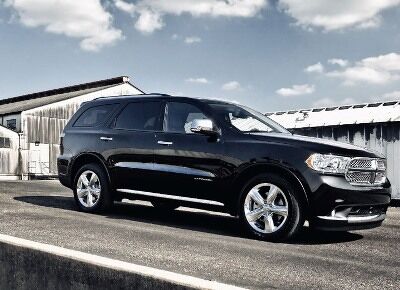 The second generation Durango debuted shortly before the companion Dakota. Like the Dakota, it has much in common with the large Dodge Ram pickup, including a fully-boxed frame. It is 7 in. longer, 2 in. wider, and 3 in. taller than the previous model. Chrysler will introduce its own version of the Durango, the Chrysler Aspen, for the 2007 model year.

The 2007 model was reworked to halt a sales decline, debuting at the Dallas Auto Show in April 2006. It includes a reworked front clip with a new fascia, grille, hood, and headlamps as well as updated fenders and wheels. New features include electronic stability program, tire pressure monitoring system, rear park assist, and a one-touch turn signal. The 2007 model also has a reworked floor, second-row seats, and electrical system in preparation for the 2008 hybrid version. 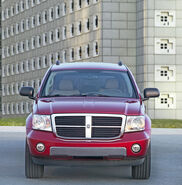 1999 Dodge Durango
Add a photo to this gallery

The Durango was launched just after the second generation Dodge Dakota on which it was based (during the late 1980s, Chrysler designers proposed building an SUV version of the Dakota pickup; this was shelved when the Jeep division was about to release the Grand Cherokee as their flagship SUV). It is a very sturdy truck-based SUV designed to hold up to seven passengers comfortably and tow up to 8,000 lb with ease. The 4.7 L PowerTech V8 replaced the 5.2 L engine for 2000. In that same year a special high performance version called the R/T was released with a 5.9 L 245 hp V8 engine.

1999 Dodge Durango
Add a photo to this gallery

This page uses content from Wikipedia; see Dodge Durango, which includes these contributors.

Retrieved from "https://automobile.fandom.com/wiki/Dodge_Durango?oldid=104715"
Community content is available under CC-BY-SA unless otherwise noted.