Dodge introduced the Demon in 1971 as a corporate twin to the successful Plymouth Duster, and even though the Demon was a decent seller, it wasn't nearly as popular as the Duster. Like the Duster was a fastback coupe version of the humble Valiant, the Demon was a likewise fastback coupe version of the equally-humble Dart, borrowing its front end sheetmetal from the windshield forward, but with its own distinctive styling in the rear. The Demon would be renamed Dart Sport in 1973 and would continue until the A-bodies were cancelled in 1976 in favor of the new F-body Dodge Aspen and Plymouth Volare that were introduced that same year.

The Demon was renamed Dart Sport this year, bowing to pressures from various religious groups around the U.S. (mainly in the southeastern U.S.) who objected to the use of the "Demon" name. Since the Demon name was dropped, that spelled the end of the little red devil cartoon figure too. The Dart Sport got another new nose this year with a larger front bumper to comply with the new federal bumper safety standards this year. The front end now came to a small point in the middle, and contained a new grille and slimmer rectangular turn signals beside the headlights. The taillights were now 2 separate squares for the running/brake and reverse lights. All drivetrain choices continued as before, the 340 was still available but there was never an official "Dart Sport 340" model. The back seat now had a fold-down option that greatly improved cargo space. There weren't many changes at all in 1974 other than the 340 was discontinued and replaced with the larger 5.9L (360 cid) V8. The all-but-invisible 198 Slant Six was also dropped, so the engine choices were the 225 Slant-6, 318 and 360 V8s. 3- and 4-speed manuals were available on all but the 360, which wasn't available with the 3-speed. A 3-speed automatic was available on all engines. An interesting Hang-10 package became available this year that had special striping and decals, an optional manual canvas sunroof and fold-down rear seatback (to better accomodate the surfboards, of course). All Hang-10s had white paint, white interior with multi-colored woven vinyl inserts, and orange shag carpeting (hey, it was the '70s), and could have any engine or transmission that the Demon offered, including the 360.

1975 Dart Sports got another new nose treatment with a blacked-out grille with horizontal bars. Catalytic converters became standard on some cars this year depending on where it was sold, mandating the use of unleaded gasoline. All engines and transmission choices continued, and the unique Hang-10 package hung in there for one more year. In 1976, the 360 was discontinued, making the 318 the top engine option. There was an interesting Dart Lite model that had the Slant-6 engine with ultra-tall rear end gearing with other lightweight items installed in the quest for achieving better fuel economy (similar to Plymouth's Feather Duster). The Hang-10 package, however, was dropped as the Dart Sport's tenure was coming to a close at the end of this year along with the other Chrysler A-bodies. The new F-body Aspen would replace the Dart, but there would be no direct replacement for the Dart Sport. 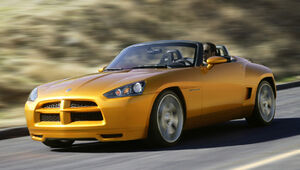 In 2007, Dodge resurrected the Demon name on a 2-seat concept car that would, if produced, compete on a level with the Mazda Miata and Pontiac Solstice/Saturn Sky twins. Since Dodge took so much flak for the use of the Demon name back in the early 70's by various religious coalitions, it's rather odd that it would use it again, especially in today's politically-correct litigious society... but time will tell if the car is produced if Dodge will continue to use the Demon name, or bow to pressure again from the "PC police" and change it again.

Retrieved from "https://automobile.fandom.com/wiki/Dodge_Demon?oldid=86170"
Community content is available under CC-BY-SA unless otherwise noted.