For more information about the 1966-1978 Charger, see the Dodge Charger (B-body) entry.

For more information about the 1983-1987 Charger, see the Dodge Charger (L-body) entry.

There have been a number of vehicles bearing the Charger nameplate, but the name has generally denoted a performance model in the Dodge range. The current Chargers are rear wheel drive sedans.

The Charger is available in five trims: the SE, SXT, R/T, Daytona R/T, and SRT8. SE and SXT models have a 4-speed automatic transmission while the R/T, Daytona R/T and SRT8 models sport a 5-speed automatic transmission. Four different engines are offered, dependent upon trim, and many options are different from level to level. Some of the standout standard features are listed below:

A complete list of colors for the Charger can be found on CarsDirect.com.
Some of the available colors are:

There are no hybrid models of the Charger.

The 2012 Dodge Charger features a Braking System and a Gas System. There is also a steering wheel and a Dashboard.

While more precise figures are not yet available, Kelley Blue Book expects the Charger "to hold its value better than most domestic sedans, especially in the near term." 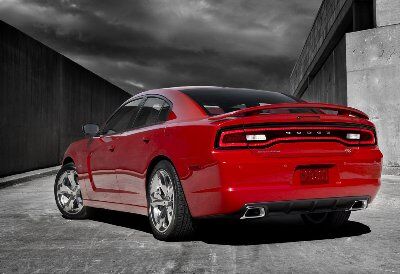 In February 2005, Dodge introduced a new full-sized rear wheel drive Charger on the Chrysler LX platform also used by the Chrysler 300 and Dodge Magnum (the interior of the Charger is almost identical to that of the Magnum). Also, it replaced the Dodge Intrepid. This Charger is a four-door sedan, disappointing some fans of the previous two-door Chargers. It is built in Brampton, Ontario, Canada.

Some fans of the classic Charger were disappointed by the redesigned Charger's four door setup, having expected a rival to compete with the redesigned Ford Mustang. The 1999 Charger concept borrowed a number of classic muscle car design cues, but the final version delivered to the public appeared vastly different from the concept version.

Part of the disppointment stems from the fact that the redesigned Charger was never intended as competition to the Ford Mustang, but rather as a replacement for the outgoing Dodge Intrepid sedan which had been waning in popularity for several years.

Despite criticism, however, intial Charger sales were strong, topping 30,000 units by November of 2005.

The large Chryslers also have an AMC heritage. The previous LH cars were based upon the Eagle Premier and Dodge Monaco, and the current cars are in the same factory that was acquired from AMC. The history of the Dodge Charger and Dodge Charger Daytona are legend, but previous mid and large AMCs before the Premier included the Hudson Hornet featured in the movie Cars and the Penske factory backed AMC Matadors of the 1970s which battled it out with Dodges and Plymouths. The AMC heritage line goes back to the 1930s Nash Ambassador, a contemporary of the Chrysler Airflow.

Changes for 2009 include a horsepower boost for the 5.7L Hemi to 368, while horsepower for the base 2.7L V6 dropped from 190 to 178. Other engines remain the same. Taillights were revised slightly with the 2 round brake lights (reminiscent of the 1968 Charger) in each lens more pronounced than before, and revised rear nameplates.

The 2006 Charger Daytona R/T debuted at the Chicago Auto Show. It features a High Output 350 hp (261 kW) version of the 5.7 L Hemi as well as an updated suspension and tires. Visual additions include a special front fascia with a chin spoiler. In a retro touch, the Daytona R/T features black "Hemi" decals on the hood and rear fender and is only available in two retro colors: "Go ManGo!" metallic orange (from the 1970 Charger) and Top Banana yellow (also a 1970-vintage color). It is priced at $32,495 and 8,000 will be produced for one year only. "TorRed" was announced as a new color in January 2006.

An SRT-8 version of the Charger debuted at the 2005 New York International Auto Show. Powered by a 425 hp (317 kW) version of the 6.1 L Hemi, it also features upgraded Brembo brakes, and interior and exterior updates. The engine produces 420 ft·lbf (569 N·m) of torque. This power rating makes the 2006 SRT-8 as powerful as the largest of the legendary Hemi engines of the muscle car era.

A new Super Bee version of the Charger debuted at the 2006 New York International Auto Show for the 2007 model year. It shares the SRT-8's 425 hp (317 kW) 6.1 L Hemi engine but comes in special "Detonator Yellow" paint with black decals. For 2008, Detonator Yellow was discontinued and replaced with Surf Blue.

In 1999, Dodge came all out with a new Charger R/T concept car. It took many styling cues from the 1960s Chargers (most notably the second generation) but also had four doors. The designers attempted to blend the rear doors into the design so they would not be noticed very easily. Compressed natural gas was purported as being in the lineup for a possible fuel source.

While making an important statement for CNG technology, the Charger R/T was equally appealing to the design community. It had functional side scoops, as does the Dodge Viper, and the chrome plated, central mounted exhaust was somewhat reminiscent of the Viper. It even has functional air exhausters sculpted into its rear fascia.

The Charger R/T was equally important for what it said about CNG technology. The concept car showcased a new storage tank system that one day might deliver 300 miles range in a CNG-powered passenger car and not compromise storage space in the trunk.

The cylinders, or pressure cells, inside the fiberglass storage tank were lined with a gas-impermeable high density polyurethane (HDPE) thermoplastic and wrapped in a hybrid mix of high-strength carbon and super-tough glass filaments that were wound with an epoxy resin. Finally, the cylinders were laid into a foam eggcrate to absorb impacts. It was strong for its weight, resistant to environmental damage, reliable and durable. The tank can be made flat, in the shape of a conventional gasoline tank, yet the fuel can still be stored at 3,600 lb³ of pressure.

In early 2006, DaimlerChrysler relased a new police version of the Dodge Charger. It made its debut at the 2005 New York International Auto Show.

Unlike the civilian version, the police version features upgraded heavy-duty brakes, a severe-duty cooling system, police-performance Electronic Stability Program, police performance-tuned steering, and a gear shifter that is mounted on the steering column instead of in the center console. In place of the center console, Dodge has equipped the police edition with a steel plate appropriate for mounting radio equipment and controllers for lights and sirens. As of June 2006, they have been adopted by the Washington State Patrol as unmarked patrol cars.

2 Dodge Chargers were used in the making of the latest Castrol Edge advertisement. One car used an anominous branded oil whereas the other car uses the Castrol Edge oil. [6]