The Dodge Caravan and Dodge Grand Caravan are minivans manufactured by Chrysler LLC (they were sold by the Chrysler Corporation until 1998 and DaimlerChrysler until 2007). They were introduced in 1983 for the 1984 model year along with sister model the Plymouth Voyager (née Chrysler Voyager). The first modern minivans, the Chrysler company minivans are credited with creating the entire market segment for these vehicles. Though there is some debate, the Chrysler triplets did beat the Renault Espace (the first MPV/minivan in Europe, also released in 1984) by a few months, making them the first of their kind.

Since their introduction, the Chrysler minivans have been the best-selling minivans in the United States.

The Dodge Grand Caravan was discontinued mid 2020, ending 36 years of production of the original minivan. Its replacement is the 2020 Chrysler Voyager, an entry level version of the Chrysler Pacifica minivan.

Since the beginning of production in the fall of 1983, over 11 million Chrysler, Dodge and Plymouth minivans have been sold as of mid-2005.

Special anniversary editions of the Chrysler minivans have been issued to mark significant milestones; the first, in 1994, is notable for the "10 YEAR ANNIVERSARY EDITION" badges and special two-tone paint, and was offered on the Dodge SE models. The twentieth anniversary was marked in 2004 with the Anniversary Edition SXT Caravan.

The minivans are expected to be redesigned in 2007 as 2008 models by Ralph Gilles, who also worked on the Chrysler 300 and Dodge Magnum. A six-speed automatic transmission and a new 4.0 L V6 engine are all but certain to appear, while a diaper changing station is rumored. Also, there may be rear windows that roll down, or a Hemi engine. Chrysler has finalized a deal through which Volkswagen will receive a variant of the Chrysler RT platform van with its own styling and features. It is expected to be produced at Saint Louis Assembly alongside the Dodge and Chrysler vans. Volkswagen says it is not the same as the Chrysler minivans, but still uses the Caravan/Town & Country platform. The plans are to keep the Stow 'n Go seating, maybe even for the front passenger seat, but that is still being decided.

By the look of the front grille and headlights, a bit of family resemblance to the Charger and Magnum is seen. The rear of the new van is squared off, unlike the past two generations, and is quite like the Nissan Quest. The taillights are similar to the current generation, but squared off. The Grand Caravan will be discontinued in mid 2020, after 36 years of production.

This generation's minivans used the Chrysler RS platform. Foldable Stow 'n Go second and third-row seats, available only on the Grand Caravan, were introduced for 2005. These would become a characteristic of Dodge Grand Caravans from then on.

On February 5, 2004, Chrysler held a Stand By Your Van Contest, where 20 contestants had to place one hand on the updated 2005 van. The person whose hand was on the longest would win a brand new Grand Caravan, and would be one of the first consumers to experience the new Stow 'n Go seating. The event was held during the Chicago Auto Show.

This minivan was much larger than before, with more cargo space, and is probably larger than the current Dodge Durango.

The Mitsubishi 3.0 L V6, which no longer met emissions standards in California and the northeastern U.S, was dropped from the engine lineup for 2001. A 3.5 L V6 was also planned for a mid-year introduction for 2001, but this never came to fruition.

The Caravan and Grand Caravan C/V (Cargo Van) also returned to the lineup for 2003 after being dropped in 1995.

The 1996 redesign used the Chrysler NS platform and included a driver's side sliding door, a first for Chrysler. All wheel drive was reintroduced in 1997. The Caravan was Motor Trend magazine's Car of the Year for 1996. The Caravan was also on Car and Driver magazine's Ten Best list for 1996 and 1997.

Base models of the Caravan were offered in most states with either a 2.4 L four-cylinder or the 3.0 L Mitsubishi V6 engine, except in California and several northeastern states, where the Mitsubishi V6 didn't meet emissions standards. In those locales, the 3.3 L engine was offered as the V6 option from 1997 through 2000. The manual transmission, never popular, was dropped. The 2.4 L four-cylinder engine produced more power than the Mitsubishi 3.0 had in the first two generations.

In 1999 Dodge introduced the Caravan EPIC, an Electric Vehicle. This is the only production EV minivan. After the initial leases expired, Dodge had these vehicles crushed. Only about 10 were saved from this process and remain in private hands.

Other plans for this model year included three minivan concepts all to be made in the Windsor Assembly Plant, the Dodge Caravan R/T, Voyager XG, and the Chrysler Pacifica. The Caravan R/T was to include the most powerful engine ever for a minivan, rated at 225 hp. It had two Dodge Viper hoodscoops, a brushed aluminum instrument panel, racing-style pedals, and black and white rubber flooring. The Voyager XG was more rugged, and included many outdoor amenities, such as a built-in ice pack. The Chrysler Pacifica was more luxurious, had power leather seats and footrests, overhead bins and lighting, an LHS grille, and roof-long skylights. The skylights were used by the Nissan Quest instead. The Pacifica did come to be in 2003, based on the current Caravan, except that it became a crossover SUV rather than a minivan. It would become a minivan in 2017.

The 1991 through 1995 the Caravan used the Chrysler AS platform. These were the last minivans that were derived from the Chrysler K platform.

This generation of vans brought additional innovations, such as:

The first generation Caravans used the Chrysler S platform, which was closely related to the K-cars (Plymouth Reliant and Dodge Aries. There were three trim levels on the first generation Caravan: base, mainstream SE and upscale LE. The Caravan was on Car and Driver magazine's Ten Best list for 1985. Both a three-speed TorqueFlite automatic transmission and a five-speed manual were available with the four-cylinder engines, including the turbocharged 2.5 L (this was a rare combination). A cargo version of the Caravan, called the Mini Ram Van, was also introduced in 1984. It was renamed as the Caravan C/V for 1989, and was discontinued after 1995. 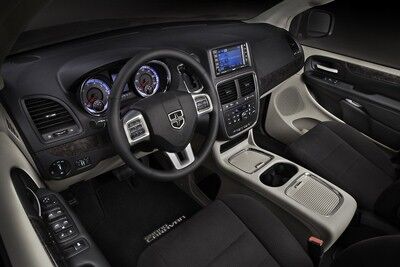 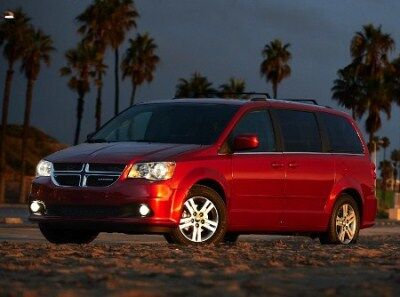 This page uses content from Wikipedia; see Dodge Caravan, which includes these contributors.