The Dodge Caliber was the replacement for the Neon, and went on sale in the spring of 2006 with the 2007 model year. The Caliber was a 5-door hatchback roughly the size of a Neon, and was first shown at the 2005 Geneva Motor Show. It featured styling elements derivative of larger Dodge vehicles, such as a crosshair grille and large wheel arches. The production Caliber was one of the first modern Dodge-branded vehicles for sale in the European market. It debuted publicly on January 10, 2006 at the North American International Auto Show, amid jokes by David Spade. The base price was $13,985. It was replaced by the Dodge Dart in 2012.

The car also featured an electronically-controlled all-wheel drive system with variable torque between speeds of 25 and 65 mph for optimal handling.

The Caliber rode on the GS platform, co-designed with Mitsubishi Motors. It shared the platform with the Mitsubishi Lancer, but was most similar to the Jeep Compass and Jeep Patriot.

The Caliber was built at the Belvidere Assembly (IL) plant, where its predecessor was produced.

The Chrysler Group announced a marketing plan for the first year of the cars' production. The plan included 20% of the budget going towards online marketing, a blitz of print ads and a number of television ads.

It should also be noted that Dodge marketed the Caliber the exact opposite than they marketed the Neon when it first came out. When the Neon first came out, they sold advertised it mostly on its cuddly looks, with many ads consisting of just the front end of a Neon and a big "hi" over it. For the Caliber, they are claiming that it is "Anything but cute", and its ads show it repelling cuteness.

Three models were available at the Caliber's launch, with a fourth available mid-2006.

The base SE model featured front wheel drive and a 1.8 L 148 hp (110 kW) GEMA I4 attached to a 5-speed manual transmission. A 2.0 L 158 hp (118 kW) version of the engine was available as an option, which comes with the CVT2 transmission. There was no automatic transmission for the 1.8 L engine, nor was there a manual transmission for the 2.0 L. The standard configuration for the SE lacked air conditioning, and did not have power windows, door locks, or mirrors. The grille surround was body-colored, while that of all other models was chromed. There was no tachometer, and no assist handles. Fifteen inch steel wheels were standard. Some options were not available on the SE.

The SXT had the same engine choices as the SE but many more features were available as standard. Air conditioning was standard equipment at this level, including the Chill Zone beverage cooler inside the front lower glove compartment. The driver's seat adds height adjustment, the passenger seat now folded flat for load-carrying, and the rear seats now reclined. Power windows, locks, mirrors, and remote keyless entry were now included. The grille surround was now chromed, and 17-inch steel wheels were now standard, with 17-inch aluminum wheels as an option. The cargo area light now doubled as a removable, rechargeable flashlight, while the front dome light now incorporated reading lamps. The front console now included a 115-volt 2-prong power outlet.

The R/T model had 172 hp (128 kW) 2.4 L version of the GEMA engine, equipped with the CVT2 transmission, and programmed with an 'AutoStick' feature giving six simulated fixed ratios in a clutchless manual mode in addition to the standard CVT 'Drive' mode. 18-inch aluminum wheels were standard, while chromed were an option. At launch, all-wheel drive was the only option, with front-wheel drive and a manual transmission promised later. ABS was standard, and the suspension and steering were tuned for performance.

Externally, the R/T was distinguishable by body-color/chrome door handles (replacing black on other models), a chrome side molding, chromed exhaust tip, and front fog lights as standard, as well as R/T badging.

Internally, the car came as standard with color-keyed fabric seat inserts, leather seats being an option as on the SXT. Color-keyed instrument panel trim was also standard, as was a leather-wrapped steering wheel with audio controls and speed control, and a cargo area cover (all options on the SXT).

The SRT-4 model, introduced at the Chicago Auto Show in February 2006, was a replacement for the Dodge Neon SRT-4 modified by Chrysler's Street and Racing Technology group. It featured a turbocharged version of the 2.4 L engine with a class-leading 300 hp (224 kW). This was routed to the front wheels with a six-speed manual transmission. The SRT-4 used the large 13.3 in (338 mm) front vented disc brakes with dual-piston calipers and 11.8 in (300 mm) rear single-piston disc brakes from the Chrysler 300C. The suspension was lowered as well. 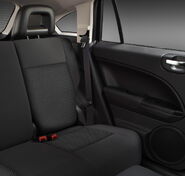 Drive journalist Richard Blackburn nominated the Dodge Calibre as the worst car of the decade.

Retrieved from "https://automobile.fandom.com/wiki/Dodge_Caliber?oldid=111320"
Community content is available under CC-BY-SA unless otherwise noted.