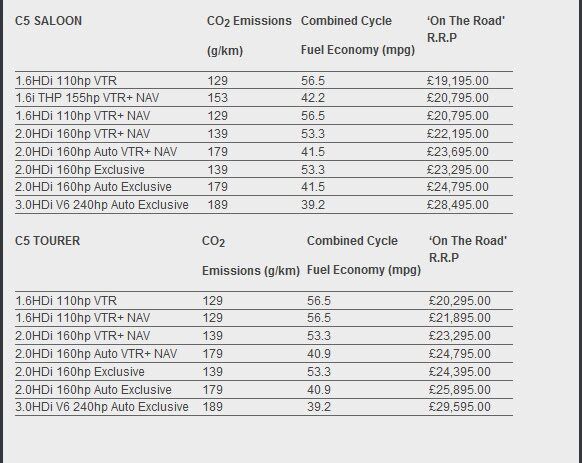 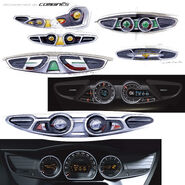 The second generation C5 will debut at the 2008 Brussels Motor Show. It will be offered in sedan and liftback wagon body styles. The range is predicted to include powerful versions of the 2.7-litre V6 HDI Diesel engine.

The style is unveiled through a concept car called C-Airscape, shown at the 2007 Frankfurt car show.

The first generation C5 is available as a five-door liftback or station wagon. Unlike its predecessors, the C5 is a liftback with a three-box design and a hatch. This form actually disguises the hatch, so Citroën has completely reversed the design philosophy from the fastback sedan era of Robert Opron. Power comes from by 1.8 and 2.0-litre straight-4 and 2.9-litre V6 petrol engines as well as 1.6, 2.0 and 2.2-litre direct injection diesel engines.

The C5 is the last Citroën developed under the chairmanship of Jacques Calvet (1982-1999), a period which saw the marque's historically distinctive design and engineering brand erode markedly.

The C5 had a further development of Citroën's hydropneumatic suspension, now called Hydractive 3. The major change with this system was the use of electronic sensors to replace the mechanical height correctors seen in all previous hydropneumatic cars. This allowed the suspension computer to automatically control ride height: at high speed the suspension is lowered to reduce drag and at low speeds on bumpy roads the ride height is raised. Manual control of ride height was retained, though it was overridden by the computer if the car was driven at an inappropriate speed for the selected height. Certain cars also featured the computer controlled ride stiffness seen on the Xantia and XM.

In a major break with Citroën tradition, the brakes and steering were no longer powered by the same hydraulic system as the suspension. It has been speculated that the primary driver for this was the cost of developing electronic brake force distribution for the system when the PSA Group already had an implementation for conventional brakes. Another factor may be the highly responsive nature of Citroën C5 brakes, which some have found hard to adjust to on other hydropneumatic cars, though it is felt by some to be superior. It can be scary for a C5 driver used to the instant reactions of an older hydropneumatic car to drive another vehicle and find an inch of pedal travel before any significant braking is achieved.

The turbo power originates form two fixed turbochargers of identical size. Each of these can supply half the air input required to give the engine more power. Fuel mileage is 8.1 litres/100km this was received from city and highway driving. The side window are laminated to reduce noise from passing cars.

Retrieved from "https://automobile.fandom.com/wiki/Citroën_C5?oldid=100647"
Community content is available under CC-BY-SA unless otherwise noted.