Generally, this is a very good car. It handles well, and the ride is particularly smooth for a car of this size and price. It has some interesting standard features such as the steering wheel with the fixed hub, which also has stereo controls and cruise control/speed limiter on it. The car has an digital centre speedometer, and personal experience tells me that the lower powered 1.6 HDI diesel is particularly economical.

On the down side, this is a typical Citroen. In other words it doesn't feel wonderfully well put together, and if you don't like rattles it certainly isn't a car worth considering. The reliability of the electrical items isn't what it might be either.

The MPVs based on the C4 have now launched in the UK - 5 and 7 seater C4 Picasso. I believe that there is a 4 door saloon version that is either on sale, or will be going on sale before too long, in selected European markets. I don't believe there are any plans for an estate, though I may be wrong on this point.

C4 WRC
Add a photo to this gallery 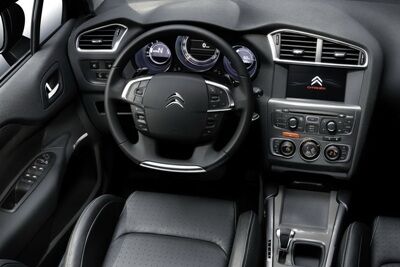 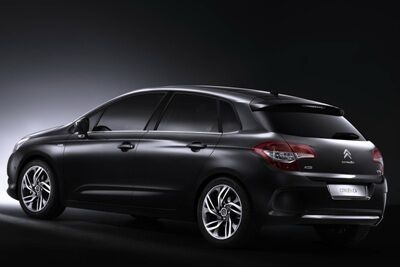 The second generation Citroën C4 made its debut at the 2010 Paris Salonbefore it was launched in September. The new model was slightly bigger than the last, and was only available with five doors. A three-door version was omitted by the French company because of the low sales of the previous generation three-door, and to avoid the risk of "cannibalizing" the DS3 sales.

Compared to the outgoing model, the average new design of the French line is less eccentric. In general, the lines are less rounded, the front is characterized by large clusters with aggressive design "cut" on the top and a "step" on the underside. Clearly visible in the front grille is the Citroën, formed by extensions of the central logo. The engine hood is made more aggressive by two longitudinal ribs, while the bumper, which is also aggressive, has a rather large mouth, flanked by two air intakes and two slots for the fog lights. The side view shows two longitudinal ribs, one just above the line of door handles and the other at the bottom. The tail is characterized by clusters that penetrate partially into the side and partly in the boot lid. The large bumper appears massive from the rear view but. at the same time, it raises the threshold for overload. The dashboard of the second C4 series is characterized by blue-lit instrumentation in different shades, combining analog and digital technology. The dashboard, with the now ever-present display, is also modern in styling, and has some ribs, especially at the top, which complement the external lines of the bodywork. The steering wheel doesn't have the fixed hub like the first generation. The seats have a sporty design, with padded side panels, but offer little lateral support. The sofa is divisible according to the now familiar pattern 60-40, but it is not tilting. The luggage compartment offers up to 408 liters for the standard, expandable up to 1,183, by lowering the rear seat backrest.

At the end of 2012, Citroën unveiled the sedan version called "C4 L". The sedan version was designed by the new PSA Style Centre in Shanghai. It was produced for the Chinese market in the Wuhan plant, and for the Russian market in the Kaluga plant. The platform is the same as the C4 hatchback, with the wheelbase increased to 2,71 m. The engine range was composed of the 1.6 VTI Prince THP from 155 to 170 HP, and the new 1.8 VTI with 135 HP only for the Chinese market. All models are equipped with stop-start system. The C4 sedan is manufactured in El Palomar, Argentina, and was planned for launch in the Latin American market in late 2013.

The Citroën C4 Aircross is a compact SUV based on the Mitsubishi ASX and the Peugeot 4008. It was featured at the 2012 Geneva Motor Show. A four-wheel drive version of the Aircross is also available

The Citroën C4 Cactus is a compact SUV produced by French automaker Citroën in PSA’s Villaverde factory in Madrid, Spain since spring 2014. Sales commenced in France in June 2014. Although branded as the C4 Cactus it is based on the smaller PF1 platform that underpins the Citroën C3 and DS 3.

The second set of C4 is provided with specific tires with low rolling resistance, and of the 200 kg of polymer used in each sample, about 30 are environmentally friendly. The structure of the Mk2 C4, and C4-II, is derived from that of the first series: even the pace was unchanged, but there are some new features in this case. To make the car more comfortable, the geometry of the suspension was slightly modified, while maintaining the original patterns of the previous C4, revised in some points to make life more comfortable on board. In addition, new bushings use improved and more useful rubber. The brakes are disc and the front ones are ventilated, with ABS and ESP standard across the range. The rack and pinion steering with electro-hydraulic actuator is copied from the previous C4. The engine range includes three petrol and four diesel engines:

The speedo is housed in a translucent digital instrument display panel that is as clear as day even in the brightest daylight.

Fixed centred controls steering wheel which stays upright even when the steering wheel is turned. Looks very cool, but is functional as it ensures that the driver’s airbag always deploys at the correct angle, which is a world first. It features a square-shaped driver's airbag.

The Citroën C4 has been named for 2004's Most Beautiful Small-Medium Car in the World.

Retrieved from "https://automobile.fandom.com/wiki/Citroën_C4?oldid=103690"
Community content is available under CC-BY-SA unless otherwise noted.