The Chrysler 300 is a near-luxury sedan designed by Ralph Gilles. There have been many vehicles using the name, starting in 1955 and continuing to this day. This page is about the modern Chrysler 300, not the Chrysler 300 letter series cars of the 1950s and 1960s.

The new 300 is offered in six versions: the basic entry level 300, the "Touring" version, a more luxurious "Limited" model, the top-of the line 300C, the "Luxury Series", and the performance-oriented SRT-8.

The top of the line 300C version uses a 5.7 L Hemi V8. This engine can run on four cylinders when less power is needed, reducing fuel consumption. The EPA has rated the 300C as getting 17 mpg city, 25 mpg highway. When all 8 cylinders are needed, the 300C can make 340 hp (254 kW) and 390 ft·lbf (529 N·m) torque. The Heritage Edition of the 300C features the 5.7 L engine along with many of the SRT-8's exterior modification, added chrome accents, and special tires on 18 inch wheels. It is the first Chrysler vehicle with SmartBeam headlights.

Today's actual prices for the Chrysler 300 can be found at CarsDirect.

Because the new 300 model only debuted in 2005, accurate long-term reliability information is not yet available.

Some of the standard safety equipment found on the 300 includes: 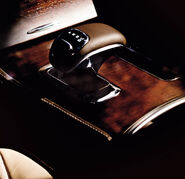 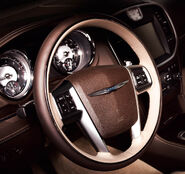 Colors will vary by trim, and a complete list is viewable on CarsDirect.com. Some of the available combinations include:

There are no hybrid models of the 300 in production at this time. 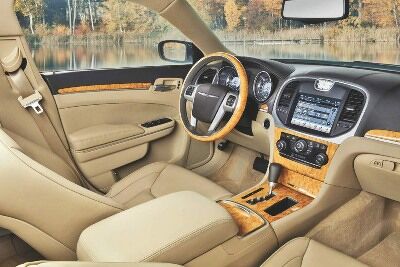 According to Kelley Blue Book, "the 300 is projected to hold a better than-average-residual value, with the Touring actually bettering the V8 300C over a five-year period by a few percentage points." 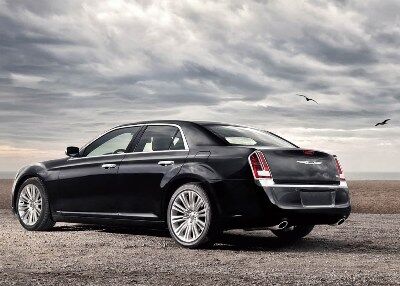 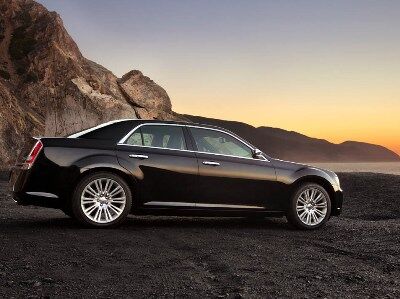 A redesigned 300 was introduced in 2011. Only the sedan body-style is available; the station wagon version of the 300 has been discontinued. Exterior changes include an all new body, bi-xenon HID projector headlights, LEDdaytime running strips within the headlights, new tail lights with LEDs and a horizontally slotted front grille as standard. The car also features an updated version of the Chrysler brand's winged emblem, which dropped the blue ribbon centre dating back to 1930s. Thinner roof pillars and a more raked windshield contribute to improved visibility. A dual-pane panoramic sunroof will offer twice the outward visibility of an average sunroof. The new 300 has optional 20-inch polished-aluminium wheels. The all new interior upgrades include a new instrument panel with "soft-touch" materials throughout, 8.4 inch Uconnect Touch, new steering wheel and centre console, and standard leather seating on all trim levels. Both seat-mounted and curtain side airbags were made standard.

The 2011 model is offered in Touring, Limited, 300C, and 300C AWD trim levels. Touring and Limited trims come with the Pentastar V6, while the 300C line offers the 5.7 HEMI.[23] A 300S trim was introduced at the 2011 New York International Auto Show together with the 300C Executive series. The 300S featured black treatment for grille and headlamps, 20-inch polished-face aluminium wheels with black painted pockets, 10-speaker Beats by Dr. Dre sound system, and steering wheel mounted paddle shifters. This was also sold in Europe as the Lancia Thema S from 2014.

An SRT8 version was unveiled at the 2011 New York International Auto Show, powered by a 6.4-litre 392 HEMI V8 engine. The 6.4 392 Hemi engine is also used in other Chrysler Group SRT vehicles. With 470 hp (350 kW), the new 300 SRT8 can go from zero to 60 mph (97 km/h) in the low 4 second range. In addition to the increase in power, the SRT8 receives specific exterior trim including a lower front fascia, large exhaust tips, body color instead of chrome trim and large 20-inch aluminium wheels. The car also gets a lowered, sportier suspension setup and a large Brembo brake package. The 300 SRT (or SRT8) was discontinued for MY 2015 in the United States, but is still sold in Australia and the Middle East. Contrary to past statements by Chrysler, the 300 SRT8 is still sold in left-hand drive abroad.

As part of the 2011 Chrysler 300 advertising campaign, three TV commercials were produced. "Homecoming" featured Detroit Lions defensive lineman Ndamukong Suh driving through his rainy hometown of Portland, Oregon, in his new 2011 Chrysler 300, retracing his humble beginnings. "Attitude" featured John Varvatos seeking inspiration at a record store in Brooklyn and record under his arm and into his Chrysler 300. "Good Things" featured Dr. Dre driving through the streets of Los Angeles in a Beats by Dre equipped 2012 Chrysler 300. The 'See It Through' TV commercial featured the Chrysler 300 and notable Detroit locals, including Detroit Lion's Ndamukong Suh and a poem written in 1917 by Edgar Guest titled "See It Through".

In late 2014 a facelift version of the 300 was introduced. Changes include:

The original 300 is a muscle sedan and wagon which was first shown at the 2003 New York Auto Show as a concept car and first introduced in the spring of 2004 as an early 2005 model. The current 300 was designed by Ralph Gilles, and replaced both the 300M and Concorde.

The new 300 was built to bring a high performance, sporty sedan to compete with the likes of the Buick LaCrosse and the Mercury Montego (launched at the same time as the 300). Unlike the LaCrosse and Montego, the 300C is rear wheel drive and offers comparable luxury at a lower price. The 300 is also sold in Europe as both a sedan and a station wagon. The station wagon, sold in Europe as the 300 Touring (not to be confused with the North American sedan's "Touring" trim level), shares its body pieces of the C-pillar with the Dodge Magnum. The 300 Touring differs from the Magnum in that its exterior stying and interior fitment are that of the 300/300C instead of the less-luxurious Magnum Version.

The car has become a genuine hit for Chrysler. It is priced below similar rear wheel drive, high-performance V8 sedans from other marques. Media reports have indicated sales approaching 10,000 per month and shortages developing.

The new 300C, Dodge Charger, and Dodge Magnum all share the Chrysler LX platform, which features components derived from the discontinued Mercedes-Benz E-Class of 1996 to 2002. Such components include the suspension design, front seat frames, wiring harnesses, steering column, the 5-speed automatic's design, and a derivative of the 4-Matic all wheel drive system.

The Extended Wheelbase version of the 300 was shown for the first time at the 2006 New York Auto Show. It has 6 inches of extra length, which has been added to the rear passenger compartment. The extended wheelbase model will be built by Accubilt, an outside specialty vehicle manufacturer. Although built by this outside company, it will be fully backed by Chrysler and sold through Chrysler dealerships.

The 300 name made a brief reapparance in 1979, on a somewhat revised Chrysler Cordoba bodyshell. This "300" had non-functional fender vents, red, white, and blue pin stripes, and a 360 in³ V8. This engine produced just 195 hp (145 kW) and was mated to a 3-speed automatic transmission, resulting in meager performance. The model was gone after 1979.

The 300 is sold in many countries and as a 300 Touring which is a rebadged Dodge Magnum with the 300's front fascia. It is available with a diesel engine in Europe.