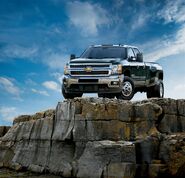 Chevrolet, or Chevy for short, is a division of General Motors. It is one of the most popular GM marques. In the North American market in 2005, Chevrolet outsold its main American rival, Ford, for the first time in 19 years, making it once again the top-selling marque in the United States.

Chevrolet was co-founded by Louis Chevrolet and William C. Durant. Louis Chevrolet was born on December 25, 1878, in La Chaux de Fonds, Switzerland. William Durant, founder of General Motors, had been forced out of GM in 1910 and wanted to use Louis Chevrolet's designs to rebuild his own reputation as a force in the automobile industry.

On November 3, 1911, Chevrolet entered the automobile market to compete with the Ford Model T. A year later, the "Classic Six" was introduced. The Classic Six was a 5-passenger touring sedan equipped with a 299 in3 (4.9 L), 6-cylinder engine capable of taking the car to a top speed of 15 miles per hour (25 km/h.)

In 1916, Chevrolet was profitable enough to allow Durant to buy a majority of shares in GM. After the deal was complete in 1917, Durant was president of General Motors, and Chevrolet was merged into GM, becoming a separate division.

Famous Chevy models include the large and luxurious Impala (1958) and the innovative air cooled rear-engined Corvair (1960 - 1969.) Chevrolet had a great influence on the American automobile market during the 1950s and 1960s. In 1963, one out of every ten cars sold in the United States was a Chevrolet.

In markets outside North America, the Chevrolet brand name has been used on other GM models.

Historically, many Latin American-market vehicles from GM were modified derivatives of older models from GM's North American and European operations. The current S10 and Blazer exemplify this strategy. However, more modern vehicles are now being marketed as market conditions change and competition increases.

In Brazil, the Chevrolet Opala was based on the German Opel Rekord from the late 1960s, continuing in production until the early 1990s, when it was replaced by a version of the Opel Omega. Other smaller Chevrolets in Brazil, such as the Kadett and Monza, were based on the Opel Kadett and Ascona respectively. Chevrolet's product line-up in Brazil now comprises some exclusive designs like the Corsa "B" based Celta sold in Argentina under the Suzuki brand, the Astra, and a brand new, Brazilian designed Vectra based on the current Opel Astra, while the current Corsa is built and the Omega name is now used on the Holden Commodore. Utility and four wheel drive vehicles line-up includes the S10, the Blazer, and the Montana. The Montana is a compact pickup truck that is also sold in other Latin American markets. From the 1960s to the mid-1980s, there was also a large station wagon, derived from the C10 truck (somewhat similar to the Suburban), called the Veraneio.

In Argentina (whose factory was opened in Rosario in 1995), the models are the same Opels made in Brazil, along with the S-10, Blazer, and Avalanche. Chevrolet had a presence in Argentina since the 1960s where it locally produced the Chevy II (sold in Argentina as the Chevrolet 400 or Chevy), but it stopped its operations in 1981, due to high inflation.

In Mexico, some of these Opel-sourced Chevrolet models are sold alongside US models. An example is regarding the Vectra. While the Brazilian Vectra is derived from the current Astra, the Mexican Vectra is actually the current Vectra as sold in Europe. Mexico also has some cars of its own, such as the Chevy C2, which is a reworked last-gen Corsa, the Sonora (which is a rebadged Tahoe), and the Cheyenne (which is similar to the Silverado but is as different as the Sonora is to the Suburban).

In Ecuador, Chevrolet has been in Ecuador for 80 years. GM Ecuador produces cars like: Luv D-Max, Corsa and Grand Vitara

In South Africa, Chevrolet was GM's main brand name until 1982, with a number of Vauxhall Motors and Holden derivatives being built under the Chevy name from 1964. In the 1960s, the advertising jingle "braaivleis, rugby, sunny skies and Chevrolet" (similar to Holden's 1970s "Football, Meat Pies, Kangaroos and Holden cars") came to epitomise the ideal lifestyle of white male South Africans. Originally, Chevrolets were CKD kits of American Chevys assembled in their plant in Port Elizabeth. However, since South Africa was right-hand drive and the US was left-hand drive, along with encouragement by the South African government to use local content, Chevrolets such as the Biscayne were eventually made entirely in South Africa, along with GM's "own car for South Africa": the Ranger. By the 1970s, South African Chevrolets like the Kommando and Constantia were based on Australian Holden models like the Kingswood, while the Firenza was based on the Vauxhall Viva. The Chevrolet Nomad sold in South Africa was entirely different from the Nomad sold in America; whereas the American Nomad was originally conceived as a station wagon version of the Corvette and eventually became the station wagon version of the Bel Air, the South African Nomad was an SUV of truck proportions before SUVs were popular.

However, these were replaced by Opel models like the Rekord, Commodore, and Senator, and in 1982 the Chevrolet brand name was dropped in favor of Opel. Because of the political climate at the time, GM decided to disinvest from South Africa and a local group eventually bought out GM's South African operations (including the Port Elizabeth plant) and renamed the company as the Delta Motors Corporation. They concentrated heavily on Opels, Isuzus, and Suzukis. However, thanks to an improved political climate in the 1990s, GM decided to reenter South Africa, eventually buying out the whole of Delta Motors Corporation. Even more news arrived for Chevrolet. In 2001, the Chevrolet name made a comeback, used on the Lumina, a rebadged Holden Commodore, and later on, on the Daewoo range of cars. Current Chevrolets include the Spark (a rebadged Daewoo Matiz), Aveo, Optra, the Lumina (including a pickup version), and the Vivant, an MPV that is a rebadged version of the Daewoo Tacuma.

In 2017 Chevrolet announced that it was exiting the South African market. Groupe PSA will continue to export the badged Chevrolet brands under the Opel name, while Isuzu took over the truck division and likewise rebrand it to the Isuzu nameplate.

Chevrolet Europe is a Swiss based firm (in Zurich) that sells the rebranded products of GM Daewoo.

It was in 2005 that all the mainstream models from Daewoo were rebranded as Chevrolet in Europe (The ownership of the SUV models in the former Daewoo range had reverted back to ownership of Ssangyong by this time). However the Daewoo name was retained in South Korea and Vietnam. In the rest of the world, most Daewoo models wore the Chevrolet badge since 2003. Exceptions include the use of the Suzuki badge in the US and Canada, the Pontiac badge in Canada, the Holden badge in Australia and New Zealand, and the Buick badge in China for certain Daewoo models. The 2007 Chevrolet Captiva crossover SUV will be the first Europe-only model for the marque.

One of the songs by The Fine Young Cannibals is used in all UK Chevrolet television commercials.

The North American-assembled Tahoe and TrailBlazer are also officially marketed in very limited numbers in Western Europe by Kroymans Corporation, based in the Netherlands. The TrailBlazer is also officially marketed in limited numbers in Japan by Suzuki, which also markets the Chevrolet Optra wagon. The Trailblazer is sold through Chevrolet in Russia.

Since 2005, Corvette is its own premium brand in Western Europe, sold alongside Cadillacs.

The Holden Commodore is badged as the Chevrolet Lumina in Thailand and the Middle East, as well as South Africa.

Chevrolet is among the newest brands in India launched by GM's Indian operations. Until June 6, 2003 (the official birthday of Chevrolet), GM India (which was originally a joint venture with Hindustan Motors) sold the Opel Corsa, Opel Astra, and the Opel Vectra. The Corsa and Astra were built at a plant in Halol, Gujarat. Since then, Chevrolet currently sells the Chevrolet Optra, Chevrolet Tavera, and the Chevrolet Forester. The Forester is imported directly from Fuji Heavy Industries in Japan, where it is sold as a Subaru. The Optra and Tavera are built at the Halol plant.

Chevrolet is also marketing and selling vehicles in Pakistan under GM, which imports and manufactures cars Nexus Automotive. The current models available are the Chevrolet Optra and most recently the newly announced Chevrolet Joy. The Chevrolet Joy, as of December 2005, has been manufactured indigenously in Pakistan.

After a 50-year absence, Chevrolet will return to Australia and New Zealand In 2018, where they will introduce the 2019 Camaro and Silverado pickup, both as righ-hand-drive vehicles. The offerings will be available for sale through GM’s Holden division but unlike any of the badge-branded vehicles that Holden shares with their American counterpart, both Camaro and Silverado will retain the Chevrolet brand and bow tie trademark.

Chevrolet competes in most Auto Racing Divisions. Their two most successful are Sports Car Racing and NASCAR Stock Car Racing. Chevy has competed in NASCAR since the 1950s and continues to win championships and make multiple trips to Victory Lane. Their Sports Car Teams do not has as much success as other teams but like NASCAR they can still win multiple races thorought the year. 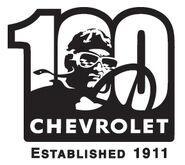 Chevrolet's 100th Anniversary.
Add a photo to this gallery

Retrieved from "https://automobile.fandom.com/wiki/Chevrolet?oldid=112058"
Community content is available under CC-BY-SA unless otherwise noted.