Caterham is a British-based manufacturer of exotic, high-performance Lotus 7 kit cars. It was established by former Lotus dealer Graham Nearn in 1959. Mr. Nearn passed away on Saturday, October 24th, 2009 at the age of 79. It was purchased by businessman (and owner and team principal of the Team Lotus Formula One operation) Tony Fernandes in April 2011. For the rest of the 2011 Formula One season following the purchase, Fernandes' racing cars ran at Grands Prix with "CATERHAM" upon their sidepods.

The team was subsequently named Caterham F1 prior to the 2012 season in response to Fernandes and the team having purchased the company. Fernandes remains in charge of the Formula One team. 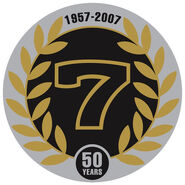 Caterham celebrates 50 years
Add a photo to this gallery

Retrieved from "https://automobile.fandom.com/wiki/Caterham?oldid=61129"
Community content is available under CC-BY-SA unless otherwise noted.