The Cadillac SRX was a luxury midsize SUV, later compact luxury crossover SUV respectively based on the company's rear-wheel drive Sigma automobile platform and front-wheel drive Theta platform. The SRX was introduced in the 2004 model year and lasted until the 2016 model year. Engine options include the 4.6 L 320hp Northstar V8 and 260hp High-Feature V6. It comes with a 5-speed automatic transmission, and all-wheel-drive is optional.

The vehicle is out of production.

An all-leather interior and curtain side airbags were standard on all models. Heated front seats and wood interior trim were standard in the V8 and available as options in the V6. DVD, sunroof, navigation system, and a folding third-row seat were all available options.

As seen on the FuelEconomy.gov website, the city/highway MPG averages are as follows: 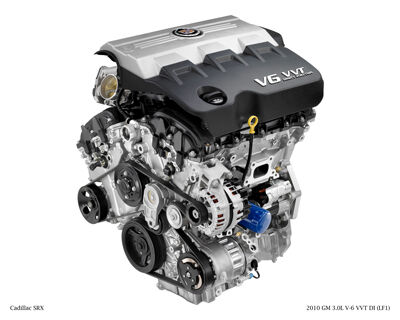 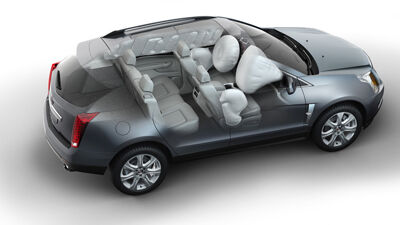 In front-, side- and rear-impact tests by the Insurance Institute for Highway Safety (IIHS), the 2010 SRX got the highest score, "Good."

A second-generation Cadillac SRX Plug-In Hybrid was rumored and expected, but none were ever manufactured.

If there are any features of this vehicle that set it apart from other vehicles in its class, then mention those unique attributes here. 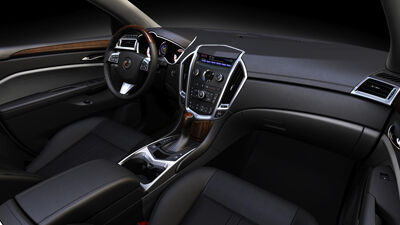 The interior of the 2010 SRX is analogous to the acclaimed Cadillac CTS. Relating to the seats, a leatherette texture is found on the base model. Heated, hand-stitched, proper leather is standard on the Luxury Collection, Performance Collection, and Premium Collection models. The Premium Collection trim also adds ventilated (cooled) driver and passenger seats, as well as heated rear outboard seats. 8-way power adjustment for the driver's seat is found in all SRX's, and the passenger's seat can be matched to it, again, with at least the Luxury Collection trim package. Two-preset memory for the driver's seat, power-adjustable pedals, door mirrors, power tailgate lift height, and other driver configurations are included in the memory package as part of the Luxury Collection.

An UltraView panoramic sunroof is standard with the Luxury Collection trim. It is composed of two separate pieces of glass, the front one tilting and sliding above the rear. A power sunshade is included.

"This is a very ugly car. So ugly, in fact, that you'll want to get inside it and shut the door as quickly as possible. But sadly, when you are inside it's even worse.... If it were a creature, it wouldn't be a lion or a praying mantis or even a chimp. No, I think it would be a wasp - useless and hateful in equal measure." Jeremy Clarkson, The Sunday Times 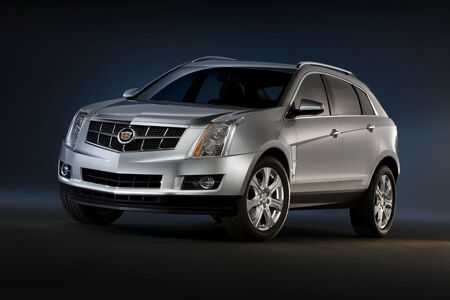 For the 2010 model year, Cadillac introduced an all new SRX based on the Provoq concept vehicle[1]. While the previous SRX was a mid-size, 7-seat SUV, the 2010 version became a compact, 5-seat crossover SUV. The production vehicle shared the front-wheel drive GM Theta platform with Saab and its short-lived CUV, the 9-4X. The first official pictures of the production vehicle were released on August 15, 2008[2].

The SRX's key rival was the bestselling Lexus RX, which has been made since the year 1998. However, once the Lexus NX was introduced for the model year of 2015 as a compact luxury crossover SUV (the RX was technically mid-sized), it became a more direct competitor from Lexus to the 2nd-generation Cadillac SRX.

This SRX was based on the GM Sigma platform and came with a five or six-speed automatic transmission; rear-wheel drive and four-wheel drive were also available. Engine options included the 255 hp (190 kW) LY7V6 and the 4.6 L 320 hp (239 kW) Northstar V8.

An all-leather interior and curtain side airbags are standard in both models. Heated front seats and wood interior trim are standard in the V8 and available as options in the V6. DVD, sunroof, navigation system, and a power foldable third-row seat are all available options.

As of 2006, the V-Series SRX-V was discontinued, and the vehicle will not be replaced before 2008, though the interior will be upgraded with more luxurious materials and trim for the 2007 model year. A Sport model, also launched for 2007, will be an appearance package with larger wheels and less chrome.

The first generation SRX was available through the 2009 model year.