The CTS is Cadillac's entry-level luxury sports sedan. It was first introduced in 2002 as a 2003 model, replacing the Cadillac Catera. Among its rivals include/d the Audi A4, BMW 3 Series, Jaguar X-Type and the Mercedes-Benz C-Class. The CTS range was further bolstered by the introduction of the V-series in 2004 with the CTS-V. The V-series has since become a Cadillac mainstay expanding to the STS and XLR models. In 2009, the range was expanded to include a Sport Wagon version followed by the introduction of the Coupe a year later.

The CTS comes in a base model, a Sport trim, and the V-Series CTS-V. While the Base model comes in a choice of either a 2.8L 210hp V6 or a 3.6L 255hp V6, the Sport only comes in the latter, and the CTS-V is equipped with a more powerful 6.0L 400hp V8. All are equipped with a standard 6-speed manual transmission and rear wheel drive. There is no automatic transmission option for the CTS-V, and none of them is available in four wheel drive. Some of the standout features include:

Adds to or replaces Base features with:

Adds to or replaces Sport features with:

According to Consumer Reports, "reliability is average" for the CTS. Automotive Information Systems, however, in assessing long-term reliability of the 2004 model, granted the CTS its highest mark with an overall Green rating, indicating minimal problems in all categories.

Available colors will vary by trim, and a complete list is viewable at CarsDirect.com. Some of the available choices include:

There are no hybrid models of the CTS currently in production.

According to Kelley Blue Book, "as for long-term value, the CTS is making gains but overall resale figures remain below those of competitors such as the Audi A4, BMW 3 Series, Infiniti G35, Lexus ES and Mercedes-Benz C-Class."

None of the recent reviews mentioned this. Seems the comment is dated.

Despite carrying the CTS name, the third generation model is actually closer in size and market position to the former STS.

Motor Trend named the third-generation CTS its 2014 Car of the Year. As customary with award winners, the magazine acquired a CTS (in Vsport trim) for a long-term test. Its verdict lauded the car's driving dynamics and reliability but criticized its CUE multi-media interface.

In a four-way comparison in the December 2013 issue of Car and Driver the 2014 CTS 3.6 placed second overall. The article praised the handling of the CTS stating "[The CTS] is the only car in this group that didn't just put up with hard driving, it indeed goaded its driver to go faster." and praised the stopping ability, stiff structure and light weight of the car. The article criticized the engine for being "coarse in the upper ranges", the acceleration times, the fuel economy and the CUE entertainment system.

Consumers were less enthusiastic about the car due in part to its notably higher sticker price versus the previous generation CTS sedan. Sales concerns forced Cadillac to apply significant rebates to the 2014 models and lower sticker prices on the 2015 models.

All engines available in the 2014 CTS are constructed from cast aluminum blocks and heads and utilize direct injection and variable valve timing. 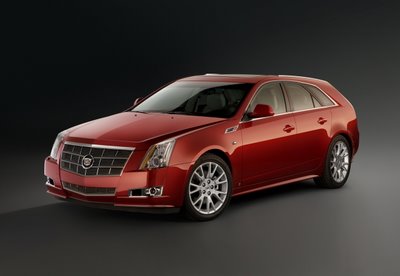 On April 2, 2006, in a 60 Minutes interview with Bob Lutz, part of a prototype Cadillac was revealed to audiences. The car featured interior and exterior design influences from the 2003 Cadillac Sixteen concept car.

GM revealed the all-new 2008 CTS at the North American International Auto Show in January 2007. The base model featured a 3.6 L variable valve timing V6 with 258 hp (192 kW) and 252 lb·ft (342 N·m) of torque. A second engine, a new 3.6 L LLT direct-injection V6 VVT engine with 304 hp (227 kW) and 274 foot-pounds force (371 N·m) of torque was also offered. The new car came with a six-speed manual transmission as standard equipment, with GM's six-speed Hydra-matic 6L50 automatic transmission available as an option on all variants. On-demand all-wheel drive was offered with both engines when equipped with an automatic transmission. Suspension, braking, and steering improvements from the previous generation CTS-V were designed into the new standard CTS.

In 2008, the CTS was selected as the car that would re-launch the Cadillac brand in Australia and New Zealand.

Introduced in 2002 for the 2003 model year, the CTS rode on General Motors' new Sigma rear wheel drive architecture. It was a return to rear wheel drive, as well as being the first Cadillac with a manual transmission since the 1988 Cimarron. It replaced the compact rear wheel drive Catera. The CTS was nominated for the North American Car of the Year award for 2002. The CTS is built at Cadillac's Lansing Grand River plant in Lansing, Michigan.

The CTS originally offered either a 5-speed 5L40-E automatic transmission or 5-speed Getrag 260 manual transmission. The Getrag was replaced with an Aisin AY-6]] 6-speed for 2005.

The CTS-V will be updated for 2007 with a revised suspension under a wider body.

The CTS was featured extensively in the car chase sequence of the film The Matrix Reloaded (2003), along with the Cadillac Escalade EXT. The first public photographs of the car were actually smuggled off the set of this film.

Retrieved from "https://automobile.fandom.com/wiki/Cadillac_CTS?oldid=104543"
Community content is available under CC-BY-SA unless otherwise noted.