Buick is a brand of automobile built in the United States, Canada, and China by General Motors Corporation. Buicks are sold in North America, China, Taiwan, and Israel. The name is pronounced "B-YOU-ick." It is now GM's only US-based semi-luxury brand since the demise of Oldsmobile in 2004.

Buick originated as an independent motor car manufacturer, the Buick Motor Company, incorporated on May 19, 1903 by the Scottish-American David Dunbar Buick (who invented the overhead valve engine on which the company's success was based) in Flint, Michigan. In 1904 the struggling company was taken over by James Whiting, who brought in William C. Durant to manage his new acquisition. Buick himself unwisely sold his stock for a small sum at his departure, and died in very modest circumstances forty years later.

Durant was a natural, however, and Buick soon became the largest car maker in America. Using the profits from this, Durant embarked on a series of several dozen corporate acquisitions, calling his new mega-corporation General Motors.

At first, the different manufacturers who comprised General Motors competed against each other, but Durant put a stop to that. He wanted each General Motors division to target one class of buyer, and in his new scheme Buick was near the top—only the luxurious Cadillac brand had more prestige.

In 1929, the Buick Motor Division launched the Marquette sister brand, designed to help bridge the price gap between Buick and Oldsmobile, however Marquette was discontinued in 1930.

Even today, Buick retains that position in the GM lineup. The ideal Buick customer was comfortably off; possibly not quite rich enough to afford a Cadillac or not desiring the ostentation of one, but definitely in the market for a car a cut above the norm.

Speculation exists, however, as to whether GM will repeat its termination of the Oldsmobile by eliminating the Buick brand in order to further cut costs, following the temporary suspension of GM's planned Zeta project to develop new rear wheel drive cars which would have fit the Buick market niche, and the consolidation of Buick, Pontiac, and GMC trucks into a single dealer franchise, which would make it simple to eliminate the Buick brand without leaving any dealers with no product. However, with the development of the Zeta platform apparently still ongoing (including the development of the 2006 VE Holden Commodore), it may be likely that Buick will survive still.

Buick began consolidating its lineup in 2005, replacing the Century and Regal with the LaCrosse, and the LeSabre and Park Avenue with the Lucerne in 2006. The company will replace both of its SUVs, the Rendezvous and Rainier with the Enclave within 18 months, while the slow-selling Terraza minivan likely to end production shortly after. This will leave the marque with just three models by 2009.

Buick's emblem consists of three shields, each bisected diagonally to the right by a straight line, the shields arranged touching each other in a left-diagonal pattern, inside a circle. If represented in color, the leftmost shield is red, the middle white, and the rightmost blue, although white is sometimes represented by light gray. This design, known as the Trishield, was adopted in 1959 for the 1960 models and represents the three models that comprised the lineup that year—LeSabre, Invicta, and Electra. The shields are adopted from the shield of the Buick family crest, which in modified form had been used on Buicks since the 30s. A version of the traditional crest appeared on Electras through the 70s.

A traditional Buick styling cue dating to 1949 is a series of three or four portholes or vents on the front fender behind the front wheels. The source of this design feature was a custom car (one not made by Buick), which in addition had a flashing light within each hole, each synchronized with a specific spark plug — a feature not used by Buick. These were originally called "Ventiports" (later just "portholes"), and have appeared sporadically on several models since, as nonfunctional ornamentation. Lower cost models were equipped with three portholes, while higher cost models came with four; when the number of portholes was standardized across the entire model line, buyers of the higher cost models complained bitterly that they felt shortchanged. In 2003 they were re-introduced on the Buick Park Avenue. After the Park Avenue was discontinued, Buick salvaged the portholes to appear on the new Lucerne. In a break with tradition, the Lucerne's portholes refer directly to engine configuration: six-cylinder models have six, while V8s have eight.

Another styling cue from the 1940s through the 1970s was the "sweepspear", a curved line running the length of the car. In the earlier cars, this was a chrome-plated rub strip which, after it passed the front wheel, gently curved down nearly to the rocker panel just before the rear wheel, and then curved around the rear wheel in a quarter of a circle to go straight back to the tail-light. During the two-tone color craze of the 1950s, the sweepspear separated two different color areas. After that, the curved line was usually indicated either by a vinyl rub strip or simply a character line molded into the sheetmetal.

During the 1950s, the characteristic form of the Buick taillamps was a tier of small circular bullet-shapes. In the early 1960s, most models began to evolve a wide, rectangular pattern, until the '65 Skylark and Electra models appeared with full-width rear lamps. Since then, wide taillampshave been a Buick hallmark.

The Buick styling cue (dating from the 1940s) that has most often reappeared, though, is for the grille to be a horizontal oval with many thin vertical chromed ribs bulging forward. This has sometimes been called the Buick "dollar grin" particularly on the early 1950s models, which had thick, highly-polished ribs that somewhat resembled teeth. It appears Buick may be preparing to abandon this styling cue for a new waterfall grille, as seen on the Buick Velite concept car from 2004 and the Buick Lucerne introduced for the 2006 model year. This waterfall grille bears some resemblance to grilles of Buicks from the 1980s, such as the Grand National.

The Buick V8 engine, nicknamed the "nailhead", became popular with hot-rodders in the 1950s and 1960s, because the vertical attachment of the valve covers, in contrast to the angled attachment of other V-8 engines, enabled the engine to fit into smaller spaces while maintaining easy access for maintenance.

Unlike some of GM's other brands, Buicks are currently not marketed globally, although the marque had a substantial export presence until a few years ago. Some Buicks were also built in Europe or were available with specific trim for european market until 1996.

In pre-World War II China, one in five cars were Buicks.

Currently most Buick sales are restricted to the United States and Canada. However, Buick has attracted a considerable market in a few countries.

Buicks used to be sold in New Zealand. Back then, they were also built at the GMNZ plant in Petone, outside Wellington. However, at the end of World War II, the Buick name was not revived.

Buick in the Middle East

Buicks used to be sold throughout the Middle East until the Buick Roadmaster was discontinued.

Since 1999, a Chinese version of the Buick Century/Regal has been produced and sold in China under Shanghai GM and has proven to be popular among upscale, professional families, establishing Buick as the most popular vehicle brand in China. In addition, Buick of China also sells the compact Excelle (based on the Daewoo Lacetti/Nubira), a five-door hatchback version called the HRV, and a modified version of the first generation Pontiac Montana minivan named the GL8.

In June, 2005, Buick announced that it will build a car named the Buick Royaum in Australia for export to China, based on the Holden Statesman and Caprice luxury cars. Buick previously marketed the subcompact Sail, sourced from GM's Asian operations and based on the Opel Corsa B, until 2005. Since then, Shanghai GM has replaced it with the Chevrolet Sail. Buick has stated that it expects China to become its second largest market.

For the 2006 model year, Buick debuted the Chinese version of the LaCrosse sedan; major differences are the exterior design, different engine choices, and a facelifted interior. It is positioned above the Regal but below the Royaum.

GM Taiwan was founded in August 1989. In the early 1990s, Buick, along with other GM brands were very popular and frequently seen on Taiwanese streets. Park Avenue, 3rd & 4th generation Regal, and 6th generation Skylark used to be sold in Taiwan.

In December 2004, General Motors signed a memorandum of understanding with Yulon, a firm based in Taiwan, for the licensed manufacture of Buick vehicles there. In July 2005, Yulon GM Motor Co. Ltd. (Yulon GM), a joint venture with 51 percent equity stake held by Yulon Motor and 49 percent by GM was founded, mainly to serve as a channel for local sales.

On April 17th 2006, Yulon-GM debuted the first Buick vehicle to be built in Taiwan, the LaCrosse sedan. It is mainly the same vehicle as the Chinese-market LaCrosse.

In addition, the imported Rendezvous is also marketed in Taiwan. 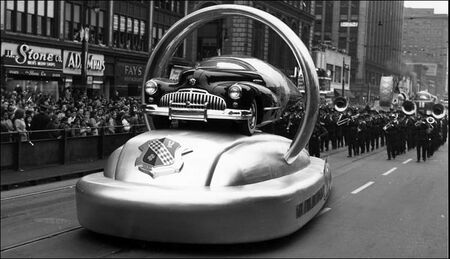 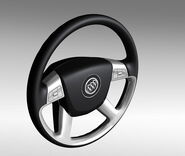