The Bugatti Veyron 16.4 was the fastest and most expensive street-legal production car in the world, with a proven top speed of over 400 km/h (407 km/h or 253 mph) and a base price of $1,700,000. It reached full production in September 2005. The car is built by Volkswagen AG subsidiary Bugatti Automobiles SAS and is sold under the legendary Bugatti marque. It is named after racing driver Pierre Veyron, who won the 24 hours of Le Mans in 1939 while racing for the original Bugatti firm. The design of Veyron ressembles the classic Bugatti models such as the Type 35.

Bugatti once again claimed the land speed record for production cars on July 4, 2010 with the Veyron Super Sport prototype. At the hands of Bugatti test driver Pierre Henri Raphanel, the Super Sport managed runs of 265.9 and 269.8 mph for an average terminal velocity of 267.81 mph on Volkswagen's Ehra-Lessien track. The much awaited 'super-Veyron' sees the car's power output jump from 987 bhp to 1183 bhp and torque from 1250 to 1500 N·m. According to Bugatti, though, production models will be electronically limited to 257.9 mph to protect the tires. 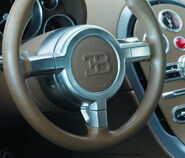 Development of the vehicle began with the 1999 EB 18/4 "Veyron" concept car. Introduced at the Tokyo Motor Show, it was similar in design and appearance to the final Veyron production car. One major difference was the EB 18/4's use of a W18 engine with three banks of six cylinders. The Veyron was designed by Hartmut Warkuss of Volkswagen rather than Giorgetto Giugiaro of Italdesign who had handled the three prior Bugatti concepts.

VW chairman Ferdinand Piëch announced the production Veyron at the 2001 Geneva Motor Show. It was promised to be the fastest, most powerful, and most expensive car in history. Instead of the W18, the production model would use a VR6/WR8-style W16 engine. First seen in the 1999 Bentley Hunaudières concept car, the W16 would get four turbochargers, producing a quoted 1001 horsepower (see engine section for details on the power output). Top speed was promised at 403 km/h (250.4 mph), and pricing was announced at €1 million (US$1.3 million at the time).

Development continued throughout 2001 and the EB 16/4 Veyron was promoted to "advanced concept" status. In late 2001, Bugatti announced that the car, officially called the Bugatti Veyron 16.4, would go into production in 2003. However, the car experienced significant problems during development. Achieving the required high-speed stability was difficult - one prototype was destroyed in a crash and another spun out during a public demonstration at the Monterey Historics event in Mazda Raceway at Laguna Seca. Production of the Veyron was delayed pending resolution of these and other issues.

Piëch retired that year as chairman of the Volkswagen Group and was replaced by Bernd Pischetsrieder. The new chairman promptly sent the Veyron back to the drawing board for major revisions. Neumann was replaced as Bugatti president by Thomas Bscher in December of 2003, and substantial modifications were made to the Veyron under the guidance of former VW engineer, Bugatti Engineering head Wolfgang Schreiber.

After the release of the car, it has been reported that while each Veyron is being sold for £840,000, the production costs of the car are approximately £5 million per vehicle. This is not the price to produce one vehicle, but rather the cost of the entire Veyron project divided by the number of vehicles produced at that time. As Bugatti, and therefore Volkswagen, are making such a loss, it has been likened by automotive journalist Jeremy Clarkson to Concorde; in that they are test-beds for advancements in technology and developed as exercises in engineering.

In the case of the Veyron, it will be several years before Volkswagen will be able to see if their investment in developing ground-breaking technology has paid off. One key measure is how much (if any) of the technology developed for the Veyron finds use in mass-produced cars.

The Veyron features a W16 engine—16 cylinders in 4 banks of 4 cylinders, or the equivalent of two narrow-angle V8 engines mated in a vee configuration. Each cylinder has 4 valves, for a total of 64, but the narrow V8 configuration allows two camshafts to drive two banks of cylinders so only 4 camshafts are needed. The engine is fed by four turbochargers, and it displaces 8.0 L (7,993 cc/488 in³) with a square 86 by 86 mm bore and stroke.

Putting this power to the ground is a dual-clutch DSG computer-controlled manual transmission with 7 gear ratios via shifter paddles behind the steering wheel boasting an 8 ms shift time. The Veyron can be driven by full automatic transmission. The Veyron also features full-time all-wheel drive developed by UK based Ricardo helping to transfer power to the road. It uses special Michelin run-flat tires designed specifically for the Veyron to accommodate the vehicle's top speed.

The Bugatti Veyron has a total of 10 radiators[1].

Top speed was initially promised to be 252 mph (406 km/h), but test versions were unstable at that speed, forcing a redesign of the aerodynamics. In May 2005, a prototype Veyron tested at a Volkswagen track near Wolfsburg, Germany, and recorded an electronically limited top speed of 400 km/h (249 mph). In October, 2005, Car and Driver magazine's editor Csaba Csere test drove the final production version of the Veyron for the November 2005 issue. This test, at Volkswagen's Ehra-Lessien test track, reached a top speed of 253.2 mph (407.5 km/h).

The Veyrons' brakes utilize unique cross-drilled and turbine vented carbon rotors, which draw in cooling air to reduce fade. Each caliper has eight[1] titanium pistons. Bugatti claims maximum deceleration of 1.3 g on road tires. Prototypes have been subjected to repeated 1.0 g braking from 194 to 50 mph (312 to 80 km/h) without fade. With the car's fearsome acceleration from 50 to 194 mph (80 to 312 km/h), that test can be performed every 22 seconds. At speeds above 124 mph (200 km/h), the rear wing also acts as an airbrake, snapping to a 70-degree angle in 0.4 seconds once brakes are applied, providing 0.5 g (6 m/s²) of deceleration[1]. Bugatti claims the Veyron will brake from 252 mph (406 km/h) to a standstill in less than 10 seconds[1]. The braking is also so evenly applied that the car will not deviate from a straight path if the driver lets go of the steering wheel, even with the brakes fully applied starting from close to top speed. [13]

Gordon Murray, designer of the McLaren F1 said the following about the Bugatti Veyron in UK auto magazine EVO during its development period:

"The most pointless exercise on the planet has got to be this four-wheel-drive 1001 horsepower Bugatti. I think it’s incredibly childish this thing people have about just one element—top speed or standing kilometre or 0-60. It’s about as narrow minded as you can get as a car designer to pick on one element. It’s like saying we’re going to beat the original Mini because we’re going to make a car 10 mph faster on its top speed—but it's two foot longer and 200 kilos heavier. That’s not car designing—that just reeks of a company who are paranoid."

However, after the car had made production, Murray went on to write an article for another UK auto magazine, Top Gear conceding a lot of his past resentment of the car.

"One really good thing, and I simply never expected this, is that it does change direction. It hardly feels its weight. Driving it on a circuit I expected a sack of cement, but you can really throw it at tight chicanes."

He also declared in the article that: "The braking is phenomenal," "The primary ride and body control are good too" and "It's a huge achievement."

The trend of backtracking on negative comments about the Veyron continued when prominent UK car show host Jeremy Clarkson declared on Top Gear that it was "The best car ever made" after initially saying it was ridiculous and would never exist.[14] He would later extend this by saying he would spend the night with British reality TV star Jade Goody to get his hands on one.

The Veyron was then proclaimed the Top Gear Magazine Car of the Year along with the Toyota Aygo and its Peugeot and Citroën clones.

The Veyron was also declared the Most Innovative Invention of 2006 by Popular Science magazine.

The production Veyron was shown for the first time on October 19, 2005 at the Tokyo Motor Show. The official United States launch for the production version occurred at the 2006 Los Angeles International Auto Show in January. Visual differences between the prototype and production Veyrons are slight, but noticeable marks include the addition of marker lights or reflectors on the front fenders and a more pronounced "dorsal spine" on the hood (reminiscent of the Bugatti Atlantic), especially near the windshield.

Six Veyrons were sold at the 2005 Dubai Motor Show in December, reportedly including the demonstration models used on the stands there. These would be the first reported private sales of the car.[15] Reports also indicate that deposits have been taken on 45 Veyrons as of December.

Bugatti originally planned to build 300 Veyrons over five years. In March 2006, Bugatti president Bscher claimed to have 70 firm orders, selling out 14 months of production. In response, the company is reportedly speeding up production, with all 70 cars expected to be built in 2006. Bscher also reported that 14 cars have been completed and most will be shipped to the United States. It is not clear how many are in the hands of customers.

The cars will be sold directly from the factory to customers or at 20 Bentley dealers worldwide. These include dealerships in London, Miami, Troy, Beverly Hills, San Diego, Pasadena, and Greenwich.

Maintenance will be possible at Bentley dealerships, but repair service will require a flown-in mechanic, whom the company promises will be available 24 hours a day.

Rear view of the Bugatti Veyron 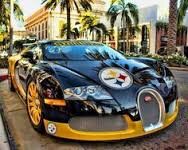 One of the rarest examples: The Bugatti Veyron Pegaso Edition. It is owned by a Russian project developer living in Dubai. 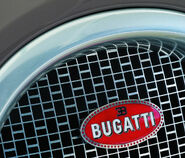 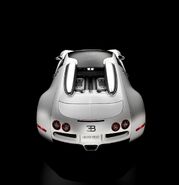