The Bentley Mulsanne was a performance luxury car produced by Bentley Motors Limited from 1980 through 1992, though derivative models like the Continental T and Azure lasted into the 2000s. The name is derived from Bentley's famous history, which included five victories at the 24 Hours of Le Mans — the 'Mulsanne Straight' being the stretch of the Le Mans racecourse where cars reach their highest speeds.

The new Bentley promised to epitomise the very spirit of Bentley motoring by offering ample performance combined with complete comfort. Presumably, the wish to drive a Rolls-Royce was the driving force for the two Bentley Mulsanne L limousines though undoubtedly with their extended wheelbase these had presence of their own in traffic.

The Mulsanne shared the traditional 6.75 L (6750 cc/411 in³) Rolls-Royce V8 with aluminium alloy cylinder heads. Two SU carburettors were replaced by Bosch fuel injection on all cars from 1986. All Mulsannes use a 3-speed automatic transmission.

Launched at the Geneva Motor Show in 1982 and produced through 1985 was the Mulsanne Turbo. There was a 50% increase in power thanks to the Garrett AirResearch turbocharger. There was the usual highly polished walnut veneered fascia, blemish-free leather and carpets and headlining of pure wool for the interior. 498 short wheelbase and 18 long wheelbase Mulsanne Turbos were built.

The Mulsanne Turbo was replaced by the Turbo R, which used a fuel injected version of the same engine.

The Mulsanne was looking stale by 1987, so the company spiced it up with the introduction of the Mulsanne S. Although this model lacked its turbocharger, many of its other details were similar to the Turbo R, including that car's alloy wheels and interior, and the suspension was firmed up for a more sporting ride. The rectangular headlamps from the 1980s gave way to quad round units for 1989, and the model lasted through 1992.

The Mulsanne was based on the Rolls-Royce Silver Spirit/Silver Spur introduced at the same time. It would be the basis for all Bentley models through the 1998 introduction of the Arnage. 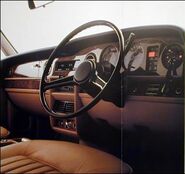