The car was conceived similarly to the Bugatti Royale — as a halo car to vault the maker into position as the supreme maker of luxury cars in the world. However, like the Bugatti, the 8 Litre Bentley failed to sell in sufficient numbers to make a profit. Priced at £1,850 for the chassis only, it was an exclusive and pricey vehicle.

Only 100 of these fantastic cars were produced and they are much sought after by collectors. 2 of the cars were modified by McKenzie, who modified the engine and lowered the chassis. One of these cars was recently sold by a London dealer, the other is believed to be in India.

The six-cylinder engine used a one-piece iron block and cylinder head with an electron crankcase. 4 valves per cylinder were specified, as was twin-spark ignition — both were state of the art at the time. Bore was 110 mm (4.3 in) and stroke was 140 mm (5.5 in).

A 4-speed manual transmission with a single-plate dry clutch sent power to the rear wheels. Semi-elliptical springs were used all around, and 4-wheel servo-assisted brakes were also specified. 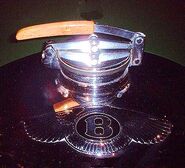