The BMW X5 is a mid-size luxury crossover SUV sold by BMW since 2003. It is based on the E39 5 Series and features all wheel drive and a line of straight-6 and V8 engines. For non-US models there is a 3.0 L diesel engine.

The BMW X5 comes in three trims: the 3.0i, 4.4i, and 4.8is. Each trim specification refers to the size of its engine, and as the engine size increases from one level to the next, more standard features are also offered. Some of the standout features are: 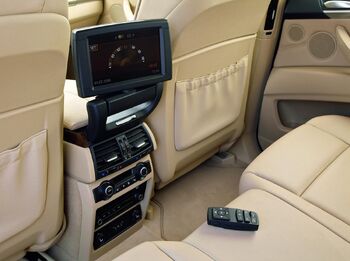 Today's actual prices for the BMW X5 can be found at CarsDirect.

Although it was not tested for Rollover, the X5 received the highest rating of 5/5 stars for all other NHTSA crash tests, with the exception of the Front Seat Side-Impact test, for which it received 4/5 stars. All trim levels come with the following standard safety equipment:

A full list of colors for the X5 is available for viewing at CarsDirect.com. Here are some of the options:

There are no hybrid models of the BMW X5.

According to Kelley Blue Book, the X5 should retain 67% of its retail value after 24 months and 53% of its value after 48. This sets the X5 higher than models such as the Cadillac SRX and Mercedes-Benz ML-Class, but more on par with the Volvo XC90 and Porsche Cayenne.

For 2004 the X5 was refreshed with new headlights, a few new exterior colors, a new four-wheel drive system and upgraded engines. The exterior touches kept it fresh and gave the X5 a more aggressive look. The grilles were enlarged, as well as their actual slats being modified in a 'flame surfaced' style. In keeping with the E39 refresh of 2001, the 2004 X5's headlights got "angel-eyes" (rings or halos around all front headlamps). The taillights also got an E39-style refresh treatment and the exterior glass went from a "dotted" pattern to a cleaner one of "lines". BMW invented a new four-wheel drive system dubbed xDrive shared both in the X5 and X3 in 2004. Instead of using the previous X5 system which consisted of power being split 60-40 (rear wheels-front wheels) and DSC to brake wheels losing traction, xDrive could variably cut off power to the front or rear axles in a matter of milliseconds, while transferring 100% of the engine power to either, thus allowing the vehicle to regain traction quickly.

Originally announced in the end of 2003 along with the rest of the X5 refresh, the X5 4.8is first started shipping in April 2004. In had a new larger 4.8 L engine (which replaced the 4.6 L engine), and was also later used in the 2005 750i/Li. It also included a slightly modified bodykit (parts of the bottom bumper became painted the body color), 20" wheels, and along with the 4.6is, were the only X5's ever to have a large chrome-tipped exhaust which hid the quad pipes.

Along with the rest of the BMW lineup (apart from the 7 E65 series), the X5 got Bluetooth kits straight from the factory if it was ordered with the Premium Package.

Specifically, the 4.4i & 4.8is models got Xenon headlamps as standard equipment in the United States.

The history of the X5 begins in the late 1990s, when Chris Bangle drew the first sketches from his Designworks studio in California. In many ways, the current car closely resembles these initial sketches. Bangle is both admired and derided for his unconventional and challenging designs-something both the X5 sketches and the E46 3 series can attest to. He claimed the BMW X5 was a very capable SAV.

The takeover of Rover proved to be very beneficial for BMW in the development of the X5. BMW engineers were able to look and use Range Rover technology and parts in the development of the X5-one such example would be hill descent control. In many respects the X5 was also influenced designwise by its British counterpart; in this case the X5 got the two-piece tailgate straight from the Range Rover. Many parts and electronics were also taken directly from the E39 5 series parts bin to save costs.

In contrast to the Range Rover models, however, the X5 was designed as a sporting car. BMW reportedly worked hard to ensure it was referred to as an SAV (Sports Activity Vehicle) instead of an SUV (Sports Utility Vehicle).

Even though the X5 was a four wheel drive vehicle, BMW chose from the start to route 60% of the engine's torque to the rear wheels, making it feel as close as possible to the company's rear-wheel drive sedans. Many reviewers commented on its road and track "feeling", and as time passed many other manufactures have caught onto this breed of SUV (e.g. Porsche Cayenne).

The X5 has been criticized for having low interior volume for its size - both the smaller BMW X3 and the 5 Series (Touring) have greater interior volume. The next generation X5 is rumored to rectify this problem.

The X5, along with the BMW Z4 roadster, are currently manufactured exclusively in BMW's South Carolina plant in Spartanburg.

The BMW E70 automobile platform will be the basis for the future X5 SUV. It will replace the BMW E53. It is expected that it will be released some time during 2007, and will be considerably bigger than the current E53 model and is rumoured to accommodate two extra passengers. The increase in size is due to the uncomfortably close sizes of the current generation X5 and smaller X3 model.

The next generation BMW X5 will be 60mm wider, 165mm longer; with a 110mm longer wheelbase, but will remain at the height of the current generation X5 at 1715mm. The SUV will be manufactured alongside with the new 2008 BMW X6 at BMW's South Carolina plant in the USA.

Several sources have indicated that the dashboard will be completely revised to incorporate all of the latest technical gadgets, which will be included in the next generation. These include radar-governed cruise control and night-vision. The E70 will bring new engines to the X5 lineup. BMW will begin a shift of replacing engines from the 2006 7-Series. It is likely that the E70 will inherit those same powertrains.

Transmission choices will likely remain like those today: 6-speed manual and 6-speed Steptronic. It is possible for BMW to implement their 6-speed SMG system into the V8-powered models. Also, this generation's xDrive AWD system will continue largely unchanged into the E70. Rumors also floating around is that the BMW 7-Series Electronic Shifter will be used in the E70 to rival the 2006 Mercedes-Benz M-Class' shifter.

The X5 will also be the first production vehicle to use FlexRay, a new electrical bus system; it is only used for the pneumatic damping system.

In Australia, two thirds of the whole X5 range are diesels (3.0d and 4.4d). The only petrol version available is the V8 version.

A BMW X5 was used as a support vehicle for a feature documentary Race To Dakar when Charley Boorman participated in the 2006 Dakar Rally. However, the car had suffered a few reliability problems.

Retrieved from "https://automobile.fandom.com/wiki/BMW_X5?oldid=77482"
Community content is available under CC-BY-SA unless otherwise noted.