The E34 succeeded the BMW E28 in 1989 with two models. The 525i used the BMW M20 engine while the 535i used the larger M30. The cars were a blend of BMW tradition and modern technology. BMW's traditional FR layout and straight-6 were used, providing the smooth engine and optimal weight distribution BMW customers had come to expect. The E34 also had a much stiffer body and was streamlined than its predecessor, looking very much like the BMW E32 7-series.

The E34 was among the most reliable luxury cars on the market, earning the best-in-class reliability rating from Intellichoice in 1991. It is still considered one of the most reliable BMWs made. It was also one of the safest cars on the road during its production, providing airbags, 4-wheel anti-lock brakes, and a very rigid body structure to protect occupants in the event of an accident. The E34's 60-0 mph (97 to 0 km/h) stopping distance of 130 feet (40 m) was the best of any production sedan in 1990. 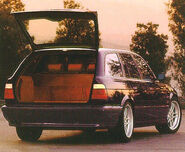 While Europe was given a large selection of engine choices and combinations, the North American market was more limited. While North America received only the 525i, 525i Touring, 535i, 530i, 530i Touring, 540i, and the M5, the European market also got the E34 518i, 520i, 6-cylinder 530i, and diesel 525td/s. The cars were also available earlier in Europe than in America.

The 525i was built throughout the E34 production, and in 1992 was offered as a wagon (touring version) in the USA. In 1991, the engine was switched from the single overhead cam M20 engine to the double overhead cam M50 engine, raising power to 189 horsepower (141 kW), while a change from a timing belt to a timing chain improved reliability. A further revision of the 525i engine took place in 1993, when VANOS was added to the M50 engine which was designated the M50TU.

The 525iX was the only four-wheel drive version in the E34 series. It was available both as a sedan and a wagon (touring version). It features a computer-controlled rear and middle differentials. The middle differential normally would divide 36% torque to the front axle and 64% to the rear axle, but could alter the ratio according to driving conditions (in case one of the axles started to slip).

In 1993 BMW added a 4.0 liter V8 to the 5 Series lineup. It was available in both sedan and touring models. Its large, torquey engine, upgraded brakes, and optional 6-speed transmission (offered in 1995) made it very competitive in the sports sedan market.

Both the E34 BMW 530i and 540i shared the M60 engine, which used Nikasil bore linings. In America, this made both susceptible to premature engine wear, as high sulfur content in some fuels resulted in deterioration of the linings. BMW then introduced Alusil linings for this engine, which solved the problem.

A rare 540i Sport model was built in 1995. This package included not just a firmer suspension and sport seats, but used many parts from the M5, save for the engine and transmission. 200 "Sport" models were built, 135 of them with a 6-speed manual. Canada also got a special version – the M540i, which was similar to the American 540i Sport but had even more M5 parts, such as 345 mm floating front rotors, 18 inch wheels, and various trim pieces. Only 32 of these cars were built, all with a manual transmission.

535i with 5-speed Getrag manual transmission:

Retrieved from "https://automobile.fandom.com/wiki/BMW_E34?oldid=77479"
Community content is available under CC-BY-SA unless otherwise noted.