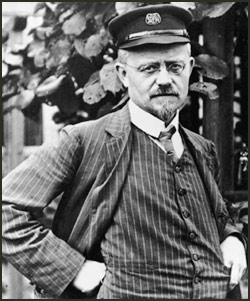 August Horch (October 12, 1868 - February 3, 1951) was a German engineer and automobile pioneer, the founder of the manufacturing firm that would become Audi.

He was born in Winningen, Moselle. He was educated in Mittweida.

He worked for Karl Benz from 1896 before founding A. Horch & Cie in November 1899 in Ehrenfeld, Cologne, Germany. The first Horch automobile was built in 1901. The company moved to Reichenbach in 1902 and Zwickau in 1904. Horch left the company in 1909 after a dispute and set up in competition in Zwickau. His new firm was initially called Horch Automobil-Werke GmbH, but following a legal dispute over the Horch name he was oblidged to change the company name. (The court decided that Horch was a registered trademark on behalf of August Horch's former partners and August Horch was not entitled to use it any more.) Consequently, Horch renamed his company to Audi Automobilwerke GmbH in 1910, Audi being the Latinization of Horch.

In August 1928 the Danish engineer Jørgen Skafte Rasmussen of DKW acquired a majority holding in Audiwerke. In June 1932 Audi, DKW, Horch and Wanderer merged to form Auto Union AG, the new company's logo was four interlinked rings, one for each of the founder companies. Horch was on the supervisory board of Auto Union.