The Audi R8 is a mid-engined sports car released by the German automaker Audi in 2006. Audi announced in 2005 that the name of the successful Audi R8 race car would be used for a new road car in 2007, the Audi R8, based on the Audi Le Mans Quattro concept car, which appeared at the 2003 Geneva Auto Show and 2003 International Motor Show. The R8 was officially launched at the Paris Auto Show on 30 September 2006. There is some confusion with the name which the car shares with the Le Mans winning R8 LMP. Originally, many thought the car would be called the R9 (as there is a gap in numbering left when Audi announced the R8's successor, the diesel-powered R10).

A second, more powerful engine variant that uses a 520-hp 5.2 L V10, a enlargened version of the Lamborghini Gallardo's engine and already seen in the Audi S8, is rumoured but not confirmed by Audi. Audi is currently in the process of developing a new turbocharged 5.2 L V10 engine for the future Audi RS6, and there is a possibility that this engine will make its way into the R8, dependent on marketing decisions. Test mules of this vehicle are developing well in excess of 600 bhp with the turbocharged 5.2 L V10. If this were to happen it is almost certain that this would create an RS8.

According to some sources[1] the 6.0 liter V12 TDI diesel engine from Audi Q7 has been confirmed to Audi R8 as well. This would make Audi R8 by far the fastest diesel powered car in the world with 0 – 100 km/h acceleration in less than 4 seconds.

The 2-seat coupe is already available in Europe, and will be made available to the USA in the summer of 2008. In addition, an open-top roadster, Porsche Carrera GT-like model is rumoured to follow in 2009.

Many publications were hailing it as the first car to truly be able to beat Porsche - considered by many to be one of the best supercars ever made, and the leader in its class. Initial comparison tests have proven quite positive in this respect; Evo Magazine in its comparison test between the R8, 911 Carrera 4S, Aston Martin V8 Vantage, and BMW M6 have claimed that the Audi is a better supercar saying that "Audi humbles Porsche. A new dawn starts today." Other publications have also made similar reviews of the Audi beating the Porsche in comparison tests. The Porsche Carrera 4S, however, costs about $20,000 less in the U.S.

The interior of the Audi R8.

A comparison between the Audi R8 and the Lamborghini Gallardo, both of which sit on the same underpinnings. 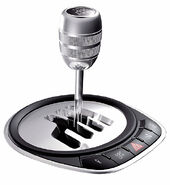 The Audi R8 shares its basic layout, transmissions, all-wheel drive, a few components, and a modified version of its aluminum space frame architecture with the Lamborghini Gallardo. Although, the majority of the car (about 85%) was developed by Audi and their in-house tuner Quattro GmbH, providing for a markedly different character than the Gallardo.

The R8 Spyder V10 Plus is the Convertible version of the R8 V10 Plus. There are very little similarities between the regular R8 Spyder and R8 Spyder V10 Plus. 0-62 mph takes 3.3 seconds with a top speed of 203 mph. It mainly competes against the McLaren 570S Spider and the Porsche 911 Turbo Cabriolet.

Other than Europe, the R8 is available in the USA and Australia.

This article about an automobile produced after 1975 is a stub. You can help Autopedia by expanding it.
Community content is available under CC-BY-SA unless otherwise noted.
Advertisement