The Audi Q7 is a full-size luxury crossover SUV designed by Audi. The Q denotes a new family of vehicles for Audi, designated the 7 in its placement between the A6 and A8. The Q7 is available now, sharing its platform with the VW Touareg and Porsche Cayenne. Based on the Pikes Peak Quattro concept car, the Q7 is designed more for on-road use than its Volkswagen cousin. It lacks the Touareg's locking differentials and low-range transfer case but gains a third-row seating option. The production model was unveiled at the Los Angeles Auto Show in January, 2006.

Insider rumors suggest that Audi and Maserati will be teaming up with Frederik Laboyrie a key mechanic at Noble to enhance the Audi "quattro" state of the art all wheel drive for the Maserati 4.2 V8 engine and platform of the Quattroporte. Audi would also be building the Maserati Kubang SUV on its already shared platform of the Q7.

In early 2005, Nissan sued Audi over the use of the letter "Q" as a model name. Audi is using the "Q" for the designation of Quattro, all wheel drive, that it has been placed in production cars for over twenty-five years. Nissan's Infiniti marque had been using Q as the name for sedans (the Q45) and SUVs (the QX4 and QX56) since 1989.

The air suspension settings, along with many other features, can be changed via the MMI interface. 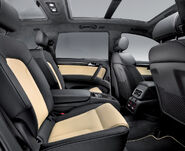 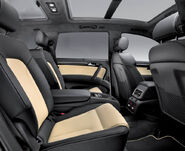 Inside the Q7
Add a photo to this gallery

Audi used to be developing a hybrid version of the Q7. Remaining a concept, details have since been released during Audi’s TechDay 2007 seminar in late august of that year [3].

The powertrain would be a parallel hybrid system utilizing a 34 kW three-phase synchronous electric motor connected to a 280 hp (206 kW) 3.6L V6 FSI petrol engine through a separating clutch. The electric motor produces an extra 285Nm (210 lb-ft) of torque, and can can run up to 50 km/h for a distance of two kilometers, in addition to the internal combustion engine’s 375Nm (277 lb-ft). 100 km/h runs are reached in 7.6 seconds and acceleration from 60 to 120 km/h in fifth gear is just under 12 seconds. Although the vehicle will weigh 2,480 kg, average fuel-consumption has been tapped at 24mpg (9.8L/100 km).

The project was canned in August 2008.

Celebrity chef Gordon Ramsay is one of the owners of the Audi Q7.

In the Top Gear Winter Olympics, an Audi Q7 TDI was driven by James May in a biathlon and has beaten Jeremy Clarkson's Volvo XC90.

Retrieved from "https://automobile.fandom.com/wiki/Audi_Q7?oldid=109367"
Community content is available under CC-BY-SA unless otherwise noted.