Autopedia
Register
Don't have an account?
Sign In
Advertisement
in: Audi vehicles, SUVs, Pages with the First Anniversary Infobox Upgrade,
and 19 more

The Audi Q5 is a compact crossover SUV to be released by German automaker Audi for the 2009 model year. It will be built using the new Audi MLP platform (Modular Longitudinal Platform) which debuted in the 2007 Audi A5 coupé. The Q5 will be the second Audi model in the "Q" range, after the full-size Q7. The Q5 will slot above the Q3, which will be based on the Volkswagen Tiguan.

The new vehicle will be built in Audi's home town of Ingolstadt. It will need an investment of about US$400 million in production tooling and expansion. The Q5 will also be produced in Changchun, China for the Chinese market. The first public introduction of the Audi Q5 was at the 2008 Beijing Auto Show on 19 April 2008, although a convertible concept car named "Audi Cross Cabriolet quattro" was shown at the 2007 Los Angeles Motor Show.

Powertrain options include a base 2.0L turbocharged four-cylinder petrol engine, a 3.2L variable valve lift gasoline engine, a 2.0L and a 3.0L TDI diesel, as well as a hybrid petrol/electric version for future model years. The only planned powertrain available for the U.S. market as confirmed by Audi USA on July 9, 2008 will be a 3.2L 6 cylinder gasoline engine mated to Audi's 6-speed tiptronic automatic transmission driving Audi's quattro permanent four-wheel drive system. Any future powertrain options for the USA market have not been announced.

The Q5 will be available in several different trim options. The S-Line trim option upgrades the base Q5 exterior with more aggressive body mouldings and mesh front fog light grills. More paint options are also included with the S-Line. The Offroad exterior package includes front and rear underbody protection panels, along with flared fender and door sill protection for a more capable look.

Harmon/Becker Automotive Systems will produce Audi's new updated Multi Media Interface (MMI) technology as it debuts in the Q5. The new system will offer navigation, communication, and wide-screen entertainment. A new Nvidia graphics processor will be used in the new MMI system, and will generate smooth map transitions while driving. A three-dimensional orientation view with true-to-scale terrain and photorealistic depictions of key landmarks will also be generated. Included features in this new system are USB storage media (iPod or MP3), satellite radio, and an integral four-band GSM mobile/cell phone (SIM card ready) with Bluetooth connectivity.

Delivery dates to dealers are October 2008 for Europe, and Summer 2009 in North America. Hot weather testing for the US model were undertaken in Florida, California, and Arizona. Future powertrain options and other possible Q5 variants for the United States market have yet to be announced.

Some of its main competitors are the BMW X3, Cadillac SRX, Infiniti EX35, Land Rover LR2, and the Lincoln MKX. 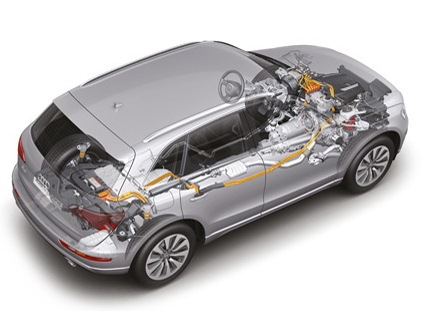 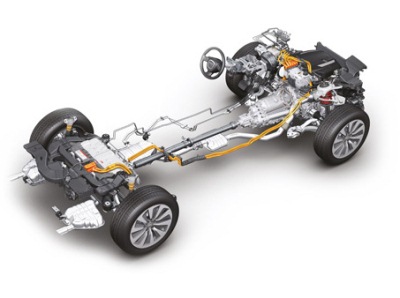 On December 28, 2009, Audi released a press release announcing commitment to green technology to the tune of 5.9 billion euros. Among this massive investment is the promise of a Q5 Hybrid for 2011, as the brand's first full hybrid model.

A couple of weeks ahead of the 2010 LA Auto Show, more information regarding the Q5 Hybrid surfaced on Audi's website. That said, Audi has yet made an official announcement pertaining to when the green CUV will be released. The Q5 Hybrid is a full hybrid, powered by a 2.0 litre TSI Inline-4 developing 240 horsepower and 480 Nm / 354 lb-ft of torque that's working in conjunction with a 33-kW (44 HP) electric motor, regenerative braking, and start/stop tech. An adaptive control system further optimizes the gas/electric power ratio. On electric motivation alone, the car is able to cruise at speeds of up to 100 km/h / 62 mph.

There will also be an S mode; which translates to a racier performance from the hybrid drivetrain.

The second generation Q5 (Typ FY) was revealed at the 2016 Paris Motor Show.

The Q5 was launched in Malaysia in March 2019, where a sole Sport trim line powered by a 2.0 TFSI engine with an Quattro all wheel drive system is available.

Fast forward to August 2021, the facelifted Q5 was launched in Malaysia. with the sportier S Line trim. It gets a 2.0 TFSI engine with mild-hybrid tech, Quattro AWD and the S Tronic dual-clutch transmission. Not long after, the Q5 Sportback also made its local debut here in Malaysia.

The second generation Q5 was launched in North America in 2018. Production shifted from Germany to the new Audi México, S.A. de C.V. factory in San José Chiapa, Puebla, México. The Q5 was launched with a 2.0 TFSI petrol engine. Power output was 252HP/273 Lb-Ft. Audi’s Quattro all-wheel drive system is standard, however it uses ‘Quattro with Ultra Technology’. According to Audi, Ultra technology improves efficiency by decoupling the driveshaft to the rear wheels when all-wheel drive is not needed. Essentially the vehicle becomes front wheel drive when cruising, or in other driving situations where the vehicle’s computers determine all-wheel traction is not needed. Audi claims the system is able to re-engage power to the rear wheels within milliseconds of the system detecting or predicting slip or the driver accelerating aggressively.

Unlike in the previous 8R generation Q5, US vehicles are only offered with the 2.0T TFSI I-4 engine. The 2.0T ‘45 TFSI’ model offers acceleration similar to the previous generation’s 3.0 TFSI Supercharged V6 (face-lifted Q5 8R, 2013-2017) while using less fuel and reduced emissions. No TDI version will be offered in North America due to the fallout from the diesel emissions scandal. Bucking an industry-wide trend of moving away from dual clutch transmissions for the latest generation of conventional torque converter automatics, Audi actually replaced the previous generation’s ZF 8HP 8-speed automatic transmission for their own 7-speed S-Tronic dual clutch gearbox.

The SQ5 is offered as a performance variant of the Q5. In North American spec, it uses a 3.0L DOHC direct-injected Miller Cycle-capable 90° V6 with a single mono-scroll turbocharger. This engine, dubbed EA839, is a substantially reworked version of the previous-generation supercharged V6 (EA837) that was used in the first generation Q5 3.0T and SQ5. Power output for the turbocharged engines remains at 264 kW (354 hp), however torque increases to 500 N⋅m (369 lb⋅ft) at only 1370 rpm. Unlike the lesser powered Q5 ‘45 TFSI’ 2.0T, Audi retained ZF’s 8HP transmission for the SQ5. Unlike the Q5, the SQ5 utilizes the full-time rear-biased quattro VI AWD system.

In 2020, Audi introduced the Q5 TFSI e plug-in hybrid variant. It featured a 14.1 kWh lithium-ion battery, giving an EPA estimated 20 mile range. A heat pump was implemented into the climate control system, providing for greater heating efficiency. The plug-in variant also received the Turbo Blue and Daytona Gray colors, available only on the plug-in variant and SQ5 models. It produced 362 horsepower and 369 lb-ft of torque and had a 0-60 time of 5.0 seconds, nearly a second faster than the standard Q5. For the 2022 model year, the battery size was increased to 17.9 kWh, increasing the EPA range to 23 miles.

The 2021 Model Year includes the Generation 3 infotainment technologies. This includes a digital marketplace in the myAudi app to add Audi Connect plans and SiriusXM with 360L. Exterior facelift revisions include updates to the grille, bumper side air intakes, side sill, and rear trim. In addition, District Green and Ultra Blue were new paint colors available on the PHEV and SQ5 variants.

The Q5 was launched in India on 23 November 2021 offering two variants - Premium Plus and Technology.

Initial vehicle models for US, Canada & Brazil include the 3.2 FSI.

The Q5 commenced shipments in October 2008 for Europe, and in the first quarter of 2009 for North America.

Indian models went on sale in June 2009, and were initially built by Audi's Ingolstadt facility, but are now being built at its Aurangabad, Maharashtra, India plant. Launch models include 3.0 TDI, 2.0 TFSI (211 PS).

A sensor informs the ESP system if a roof rack has been mounted, which will cause the Audi Q5's centre of gravity to be shifted higher in keeping with the roof load of up to 100 kg (220 lb). If a roof rack is present, the ESP engages earlier in the handling limit. Without a roof load, the driver is free to tap the full dynamic potential of the Audi Q5.

The Audi Q5 is capable of towing up to 2.0 tonnes; the standard hill descent control system makes it safe to navigate down steep inclines by regulating the preselected speed when driving at under 30 km/h (19 mph). The Q5 is also fitted with an advanced Trailer Stability Program designed to combat any unwanted snaking when towing a large trailer or caravan.

Main changes include a redesigned set of front and rear light configuration, and a new set of engines that increase both output and efficiency. Most interior user controls have narrow chrome trim. Ergonomics changes include 4-button MMI navigation plus system, additional skip function for volume dial. Large fabric-upholstered surfaces are standard on the door trim panels; inlay options include three wood veneers and one aluminium version.